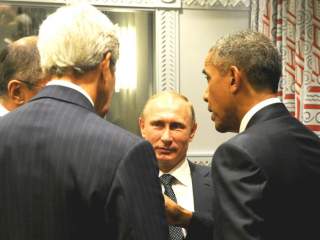 By all objectives measures, the Cessation of Hostilities agreement in Syria is on life support. In fact, it may already be dead.

You have to be upset for Staffan de Mistura, the U.N. Secretary General’s Special Envoy for the Syrian civil war. His remit—getting two intransigent parties that despise each other with a passion to agree to a formula that would resolve the Middle East’s deadliest war—can best be described as “mission impossible.” De Mistura’s two predecessors, former U.N. Secretary General Kofi Annan and U.N. troubleshooter Lakhdar Brahimi, both quit the job in frustration after it became clear to them that Syrian President Bashar al-Assad and political representatives of the moderate opposition were not serious about finding a resolution to the conflict on mutually acceptable terms.

For Annan, the resignation was partly due to what he described as the U.N. Security Council’s “finger-pointing and name calling;” the multiple vetoes by Russia and China of Security Council resolutions aiming to censure Assad for massacring civilians was simply too much for the former Secretary General to handle. Lakhdar Brahimi’s problem, in contrast, was the Assad regime’s utter dismissal of the international community’s peace conference. Indeed, it didn’t take a PhD in international diplomacy or conflict resolution to recognize that Brahimi’s conference was dead on arrival as soon as Syrian foreign minister Walid al-Moallem started accusing the other side of being blood-thirsty terrorists.

De Mistura obviously doesn’t want to talk about what happens after the Geneva peace talks break down. As an international diplomat who has been a key part of the U.N. system for forty-five years, it’s likely that de Mistura (like a lot of diplomats who have had successful careers) believes that he can squeeze out enough concessions from the Assad regime and the High Negotiations Committee to create momentum towards a comprehensive political solution that would end the war. De Mistura’s last encounter with the press on April 22 was a microcosm of his overall predisposition towards prodding two warring sides into some kind of loose accommodation. At the same time that he tried to keep expectations low that there would be any deliverables, de Mistura reminded everybody that the discussions currently underway in Geneva were different than the two previous rounds of negotiations in 2012 and 2014. “This time it is both sides, both sides…actually talking only about one subject: political transition,” de Mistura said. “[N]othing else, there is no questions that we are talking about going back, we are going to political transition.”

Naturally, there was no mention from the U.N. envoy that even the term “political transition” is disputed between both parties. One side’s political transition is another side’s capitulation. What the Assad regime sees as a more-than-reasonable formation of a national unity government with Bashar al-Assad at the top of the structure, the HNC sees as a ridiculous proposition that only seeks to extend Bashar’s rule for the rest of his seven-year term.

There is one bright spot in this never-ending tragedy, however. The Cessation of Hostilities deal crafted in February by the United States and Russia and agreed to between pro-Assad troops and moderate rebel factions has held far longer than expected. When the CoS was announced, a lot of people monitoring the conflict (including myself) assumed that the truce would be violated within minutes of the terms taking effect. All of us were pleasantly surprised that the cessation lasted for as long as it did: the seven weeks of relative calm likely saved the lives of thousands of additional Syrians who would have otherwise been killed in barrel bombings, mortar attacks, starvation sieges, torture and executions.

The problem now is that the truce is beginning to fray and that both the Syrian Air Force and rebel groups party to the deal are lobbing bombs and rockets into each other’s neighborhoods. Dozens of civilians were killed this weekend alone—a number still far lower than the count before the truce, but still high enough to cause the opposition to walk away from the talks in protest.

The $64,000 question: Does President Barack Obama have a plan in the very likely scenario that the cessation of hostilities collapses entirely, the daily death toll in Syria returns to the triple digits, the Assad regime launches a final push on Aleppo and de Mistura’s peace initiative bites the dust? Besides begging and pleading for all parties on the ground to return to the truce and keep the discussions in Geneva alive and renewed discussions about sending antiaircraft weapons to select rebel units, it doesn’t look like the Obama administration has any creative ideas on the drawing board.

If anything, de Mistura can take this to heart: when and if the talks are over and done with, it won’t be his fault.