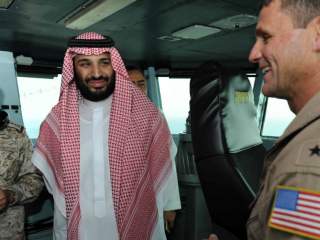 In late April, former Sen. Bob Graham made news by revealing his discovery that Obama administration officials were preparing to release the only 28 pages of the Joint Congressional report on the 9/11 terrorist attacks that were kept from the public. The 28 pages, of course, refer to a small section at the end of the 422-page congressional investigative report detailing the extent of foreign state sponsor support for Al-Qaeda prior to the September 11 attacks. And when we speak of possible state support, what we are really talking about is possible financial or logistical connections between several of the 9/11 hijackers who resided in the United States before the attacks and individuals in the Saudi royal family or Saudi government.

If there is anyone in the world who would like to see the 28 redacted pages declassified by the U.S. intelligence community, it is Bob Graham. As a former chairman of the Senate Intelligence Committee and the co-chairman of the joint congressional panel that looked into the planning and execution of the 9/11 attacks, Graham has spent much of his life after politics pushing the White House and the intelligence community to level with the American people and provide them with the final report that he helped write. Graham has always suspected that there were some elements within the Saudi government and inside the Royal Family who were at best lavishing Al-Qaeda with financial donations or at worst assisting the 9/11 hijackers in carrying out the deadliest act of terrorism on U.S. soil.

On the topic of the 28 pages, Graham doesn’t mince words. During his April 24 appearance on Meet the Press, the former senator from Florida all but implicated Riyadh in the plot. “I think it's implausible to think that people who couldn't speak English, had never been in the United States before, as a group were not well-educated could have done that [the attack],” Graham told Chuck Todd. “So who was the most likely entity to have provided them that support? And I think all the evidence points to Saudi Arabia. We know that Saudi Arabia started Al Qaeda. It was a creation of…Saudi Arabia.”

The 28 pages have taken on a mystical aura. The fact that the documents have been scurried away behind a giant vault in the Capitol and under lock and key for the last fourteen years naturally generates speculation that the George W. Bush and Obama administrations are trying to protect an important Middle East ally from public embarrassment and global censure. Why, the reasoning goes, would the U.S. Government keep the 28 pages classified if Saudi Arabia didn’t have anything to hide? Two administrations, one Republican and the other Democrat, chalk the classification up to protecting sources and methods—the typical, default response a government usually resorts to when they don’t have a better explanation for keeping something out of the public domain.

Perhaps realizing that the sources and methods argument is not good enough, administration officials, the executive officer of the 9/11 Commission, and the co-chairs of the 9/11 Commission are now relying on an entirely different argument—that there is nothing new in the 28 pages that the American people don’t already know. And, far from being an exhaustive document or a smoking gun, they argue, the 28 pages are merely rough sketches from the FBI about accusations that haven’t been corroborated. Tom Kean and Lee Hamilton, the chair and vice-chair of the commission that investigated the 28 pages, wrote in a joint statement that the content depends “almost entirely on raw, unvetted material that came to the FBI.” They conclude that “[T]he 28 pages, therefore, are comparable to preliminary law enforcement notes, which are generally covered by grand jury secrecy rules..”

Philip Zelikow—the executive director of the 9/11 Commission and a counselor to Secretary of State Condoleezza Rice—added his own thoughts to the debate to NBC News which essentially boiled down to ‘trust us, we conducted an admirable and in-depth investigation and there is nothing to see here.’ Disclosing the 28 pages to the American public, Zelikow says, would only make “the red herring” of a possible Saudi–Al Qaeda–9/11 connection “glow redder.”

If Saudi Arabia was wholeheartedly against declassifying the 28 pages and actively lobbying against disclosure, then the Obama administration would have a far better case to make in keeping those documents secret. Yet this isn’t what is happening: just this week, Saudi Foreign Minister Adel al-Jubeir again reiterated that Riyadh has nothing to hide and that declassification is therefore appropriate. It would be completely irrational for Jubeir to take this position if he firmly believed that disclosure would result in a cataclysmic crisis in U.S.-Saudi relations.

Needless to say, it’s time to speed the process up. Release the pages. Saudi Arabia doesn’t object. Members of the 9/11 Commission and the joint congressional inquiry want the material in the public domain. The American people deserve to read it themselves. And more importantly, the families of those who died on 9/11 should be afforded the right to scrutinize all the reports even remotely connected to that horrible day. It is not enough for the U.S. Government to provide them with reassurances that there is nothing new to see.