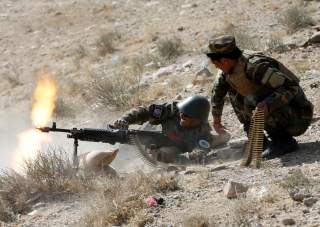 In testimony before the House and Senate Armed Services Committee earlier this month, Secretary of Defense James Mattis unveiled his new Afghan strategy, which he called “R4+S” (regionalize, realign, reinforce, reconcile and sustain). The “new” plan Mattis presented is one part a regurgitation of select Obama policies and one part an increased use of air power that is tied to no observable political or strategic objective––and in toto will only lock-in long-term strategic failure.

It is truly difficult to fathom how senior U.S. Administration and Pentagon officials can present a plan to Congress that not only ignores sixteen years of failure, but also recommends using mostly the same fundamentals that have been discredited over all those years as ineffective. This tripling down is merely the latest attempt to solve an Afghan political problem with military power.

The Taliban have signaled for many years now that they are open to negotiations. Yet instead of putting a renewed diplomatic emphasis on bringing the conflict to an end, the Trump administration is doing the two things most likely to fail: shutting down the only line of communication with the Taliban leadership and trying to use military power to force on them an outcome for their country they’ve committed their lives to opposing.

President Obama said the purpose of his Afghan surge was to “deny al Qaeda a safe haven,” to “reverse the Taliban's momentum,” and “strengthen the capacity of Afghanistan's security forces…”

The reasons the plan would fail were plainly evident before one soldier was deployed. I fought in Afghanistan during the height of the surge in 2010–11, and later reported in graphic detail how and why my fears of failure had come to pass. The reason Trump’s plan will fail is equally evident.

The objectives of Mattis’ R4+S plan are to “regionalize” the effort with neighboring countries, “realign” and “reinforce” by putting U.S. advisors down to battalion level and adding some number of NATO troops, and to “reconcile” with enemies of the Afghan government by driving “fence-sitters and those who will see that we’re not quitting this fight” to choose instead to cooperate with the Afghan government. None of these objectives, neither individually nor cumulatively, have a rational chance of success.

Just as the Bush and Obama administrations engaged with regional powers and failed to get their support for U.S. objectives, so too will this latest attempt. In fact, it may have less chance for success.

Outlining his Afghan strategy in August, Trump said he would put more pressure on Pakistan while more actively embracing India—this virtually guarantees that Pakistan will increase its opposition to U.S. efforts.

As far back as 2004, U.S. leaders claimed our military was successfully training the Afghan troops. Thirteen years ago, Army Lt. Gen. Walter J. Sharp told the House Armed Services Committee that the development of the Afghan army (ANA), "is undoubtedly one of the best good new stories in Afghanistan” because they were “providing stability during factional militia confrontations” and that “wherever the ANA goes, their fellow citizens, who are clearly impressed by their professionalism, greet them with heartwarming enthusiasm."

Yet last month, John Sopko, Special Inspector General for Afghan Reconstruction (SIGAR), released a new report that confirms the effort to train the Afghan military had largely been a failure and, without major systemic changes, would continue to be so. The government in Kabul is itself a troubling story.

Respected Pakistani journalist Ahmed Rashid wrote that “even more dangerous than the deteriorating security situation is the political crisis now unfolding in Kabul. The lack of trust between president Ashraf Ghani and his CEO or prime minister, Abdullah Abdullah, has led to a paralysis in governance and social services.” What might be an even worse story, however, is the prospects for Taliban reconciliation.

It’s difficult to understand the logic behind making a pillar of the new strategy the stated intent to force the Taliban into negotiations by the increased use of air power and more U.S. military trainers. In 2011, then-Secretary of Defense Robert Gates said the Taliban “have to feel themselves under military pressure, and begin to believe that they can't win before they're willing to have a serious conversation.” The surge not only failed to bring them to the table, but saw the insurgent force expand to the point that today they control or contest almost forty percent of the country. How Mattis can credibly claim that with barely one-tenth the number of troops he can succeed where Gates failed is not clear.

Every objective Obama set for the 2010 surge to accomplish in Afghanistan failed, despite one hundred thousand U.S. troops. Every objective Mattis outlined on Tuesday is even more likely to fail. Until U.S. officials find the humility to accept reality, that the intractable political problems in distant Afghanistan cannot be solved with military power managed from Washington, we condemn ourselves to the probability that doubling our already sixteen-year-long commitment will merely double our failure at great cost to U.S. soldiers and taxpayers. Isn’t it time to reject all pain and no gain?

Daniel L. Davis is a Senior Fellow for Defense Priorities and a former Lt. Col. in the U.S. Army who retired in 2015 after 21 years, including four combat deployments. Follow him @DanielLDavis1