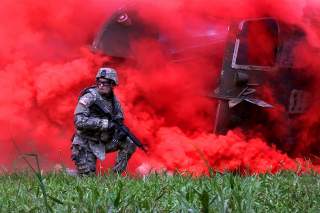 According to U.S. Code Title 10, the secretary of the Army is “responsible for, and has the authority necessary to conduct, all affairs of the Department of the Army,” including such functions as “recruiting, organizing, supplying, equipping, training, servicing,” and the “formulation of policies and programs . . . that are fully consistent with national security objectives and policies established by the President or the Secretary of Defense.” Today’s Army is suffering in almost all of those areas.

Before the House Armed Services Committee in February, Army Vice Chief of Staff Gen. Daniel Allyn testified that the state of the Army was worse than many thought possible. “Unfortunately, fifteen years of sustained counter-insurgency operations have degraded the Army’s ability to conduct operations across the spectrum of conflict and narrowed the experience base of our leaders,” Allyn said. But it was what he said next, however, that highlighted the effects from overextending the U.S. military.

“Today, only about one-third of our [brigade combat teams], one-fourth of our Combat Aviation Brigades and half of our Division Headquarters are ready. Of the BCTs that are ready, only three could be called upon to fight tonight in the event of a crisis,” he said. It is difficult to imagine that if an unexpected crisis arose, only three Army brigades would be ready to defend the nation’s interests. General Allyn’s suggestion to solve the problem was for Congress to give the Army a bigger budget.

The Army’s severe readiness problems, however, are not going to be solved by merely giving it more money.

Along with a realistic grand strategy that secures America’s vital national interests, comprehensive reform and reorganization are necessary to concurrently rebuild strength for the present, as well as to advance its capabilities into the future.

For that complex task, a highly qualified leader who can provide civilian oversight is essential in the position of secretary of the Army.

President Trump must nominate a qualified candidate who isn’t part of the status quo—someone not part of the swamp’s revolving door between industry and the Pentagon. That’s a recipe for business-as-usual, resulting in the perpetuation of the deteriorating status quo. Trump’s nominee should command respect from lawmakers on both sides of the aisle so he or she will be confirmed quickly. More important, the nominee must have three other critical qualifications:

• A solid understanding of business practices.

• An understanding of how things work on Capitol Hill.

The Army has suffered incalculable loss in opportunity costs because of a dysfunctional—or perhaps the absence of an—acquisition-and-modernization strategy. Since the year 2000, the Army has seen a dizzying array of high-profile, expensive acquisition failures that have cost the nation tens of billions of dollars: the cancellation of the Crusader artillery system, the Comanche Attack Helicopter, the Future Combat Systems and all subsequent iterations of the Ground Combat Vehicle.

Likewise, for more than a decade the Army has foundered with attempts at modernizing how it fights—its doctrine, organization and tactics. In the mid-2000s, the Army announced they were transforming into modular brigade combat teams, also known as BCT, which would produce more mobile, agile and lethal fighting organizations. CBO projected the initiative would cost $74 billion and be complete by 2013. It was clear as early as 2008, however, that the reorganization would not only fail to produce a more lethal fighting force, but it would also materially reduce combat power.

A 2008 study by the Center for Strategic and Budgetary Assessments warned that the change to a modular force would result in “roughly a 30 percent drop in the number of battalions and a 22 percent reduction in the number of companies. The loss of ground maneuver capability—‘boots on the ground’—seems at odds with the Service’s ongoing irregular warfare operations, which are often manpower-intensive.”

Even before the transformation was complete, Army leaders and commanders recognized what Center for Strategic and Budgetary Assessments had warned against. A 2012 analysis conducted by the U.S. Army War College reported “combat operations have shown that the current BCT structure is not sufficient to meet all the future operational requirements,” and as the center had predicted, “there are fewer maneuver units, a lack of functional capability” and other shortcomings.

Beginning in 2013 when the transformation was complete, the Army started replacing the combat power it had previously removed, returning the organizations to their original configuration. While the U.S. Army has failed in all its major weapons development efforts and attempts to modernize how it organizes to fight, America’s potential enemies have advanced.

During the same period in which the Army failed to produce a single working prototype, Russia modernized its armored force, robotics, cyber-capabilities and also reorganized how it fights in the field. While the U.S. Army tried and failed to produce a system-of-systems with the Future Combat Systems, Russia designed, tested and began fielding a new family of armored vehicles known as the Armata. Additionally, China has continued to modernize its entire armed forces at a rapid pace.

America simply cannot afford to see the U.S. Army continue in strategic and organizational drift. It needs a strong secretary of the Army to provide the vision, experience and leadership necessary to modernize the service.

The president should select someone who has the passion and skills necessary to solve the Army’s current readiness problems, and once again make it the dominant land force around the globe. America’s potential enemies around the world have continued advancing their capabilities while the U.S. Army treads water. It is crucial, therefore, that the president swiftly nominate a quality, experienced leader who can quickly get confirmed by the Senate and get to work repairing the Army.