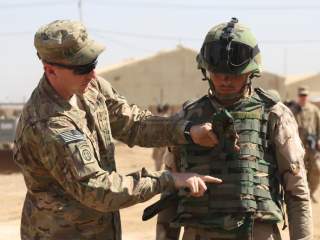 One of the hallmarks of America’s strategy to help friendly militaries successfully fend off rebels or insurgents has been providing U.S. military advisors and trainers. In recent years we have sent trainers and advisors into Iraq, Afghanistan, Iraq again, and to numerous “moderate rebel” groups in Syria. The belief behind this practice is that sending U.S. advisors to train other nations’ militaries reduces the need to send U.S. service members to fight overseas while improving the capabilities of the foreign troops. The truth is rather different: America’s efforts do not meaningfully improve foreign militaries.

The model was first touted as a major cause of the initial victory against the Taliban in 2001-02. U.S. Special Forces troops joined with Northern Alliance fighters in October 2001 and soon routed those who harbored Osama bin Laden. The fact, however, is that it was U.S. air and missile power that enabled the Northern Alliance to eject the Taliban. Since 2002 the U.S. military has been training and advising the Afghan National Security Forces (ANSF), spending tens of billions and losing scores of troops to green-on-blue attacks along the way. And yet, the net result is that even with fourteen years of U.S. support, the ANSF is losing ground to a resurgent Taliban.

The second major effort touted as a success was the training of the Iraqi Security Forces (ISF) following the downfall of Saddam Hussein in 2003. The U.S. military trained and advised the ISF from 2003 until the U.S. departure in 2011. Yet, after eight years and billion of dollars to train them, the ISF crumbled three years later against ISIS, a significantly smaller adversary. Then there was the staggering failure of when the U.S. committed $500 million to train “moderate rebels” in Syria—resulting in a whopping “four or five” trained rebels.

Now, Chairman of the Joint Chiefs of Staff Marine General Joseph Dunford Jr. says he is considering the possibility of recommending the administration expand the role of U.S. trainers down to brigade level in the Iraqi Army. Presently, the U.S. military is advising only at the division level and above, which is far from the actual battlefield. If General Dunford is successful and adds U.S. advisors to Iraqi brigade staffs, what impact on the actual conduct of the battle can we expect? Almost none.

It wasn’t the absence of properly trained fighting troops that led to the disintegration of the Iraqi army in 2014. It was the wholesale failure of officer leadership from the lowest tactical levels all the way up to Corps commanders. As numerous studies identified, the Shia-dominated Maliki government had a penchant for placing men in positions of leadership because they were politically reliable or had paid large sums of money to corrupt officials for choice command positions. This set the Iraqi army up for failure from the start.

Increasing the number of advisors Washington sends to the ISF isn’t going to make the frontline Iraqi troops at company, platoon and squad level—where the fighting actually takes place, and all below brigade level—suddenly capable of defeating ISIS forces. That process will require years of intense preparation and only happen if Iraqis themselves have the motivation to do whatever it takes to become an effective fighting force. As a means of comparison, consider how long it takes the U.S. Army to build an effective ground combat unit.

For U.S. Army units at platoon through battalion levels—the tactical echelon—to be effective, a prospective private must first be a high school graduate, score well on tests and be physically fit to a standard well above their civilian peers. Then they have to prove they are able to perform strenuous military tasks in basic training. If they don’t make the grade, they are released from the service. Those who overcome all those hurdles and are assigned to a combat unit will then be incorporated into a unit with other privates that have already acquired up to two years of experience. All will then be trained by several echelons of non-commissioned officers (NCOs) who range in experience from four to twenty years. All that is at the company level.

Then there are the levels of commissioned officers from the second lieutenant to lieutenant colonel at the company to battalion level. At each level of command those officers and NCOs have to go through increasingly sophisticated formal education to enable them to effectively lead in battle. All in all, the privates, sergeants and officers at the tactical level have experience ranging from months to twenty years. Without that mix of qualifications, education and years of experience, the U.S. Army would not be successful at the tactical level.

It has only been a year and a half since the Iraqi army disintegrated.

Rebuilding such a shattered organization will take many years under the best of circumstances. Inserting a few American trainers—however skilled and professional they may be—is not going to have a meaningful impact on the conduct of Baghdad’s fight against ISIS. If American policymakers set national policy on the flawed belief that inserting U.S. trainers will materially help the ISF beat ISIS, we are—yet again—setting ourselves up for failure.

Daniel L. Davis is a widely published analyst on national security and foreign policy. He retired as a Lt. Col. after twenty-one years in the U.S. Army, including four combat deployments. The views in these articles are those of the author alone and do not reflect the position of the U.S. Government. Follow him onTwitter @DanielLDavis1.