The Case for Michael Flynn 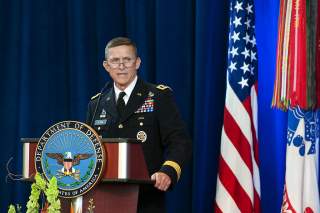 President Reagan’s national security policy was “peace through strength.” Notice that first word, peace, depends on strength—meaning military strength—which many find counterintuitive. But that strength is essential to getting the results Reagan got. Former British Prime Minister Margaret Thatcher explained those results in famously saying, “Reagan won the Cold War without firing a shot.”

President-elect Trump, with his national security appointments, is perfectly poised to pursue President Reagan’s same peace through strength policy. Most prominent in that regard is his choice for national security advisor, Lieutenant General Michael Flynn. Besides being a battle-hardened veteran with a long, storied career of defending the safety of the American people, Flynn has the skills and background required to recreate Reagan’s national security legacy.

Flynn began his military career in intelligence as a second lieutenant in 1981. Just a few years later, he went ashore with the U.S. forces liberating Grenada. That began a long career of operational combat assignments serving with the 82nd Airborne Division, XVIII Airborne Corps and other elite military units.

But it was in Iraq and Afghanistan where Flynn really shined. Flynn headed the intelligence operations of the Joint Special Operations Command in Baghdad, serving under General Stanley A. McChrystal. He was one of the main reasons Al-Qaeda in Iraq was hollowed out to a shell of what it once was. When McChrystal took command of U.S. forces in Afghanistan in 2009, he took Flynn with him as his intelligence chief. There, Flynn was widely acknowledged by military and civilian leaders as the driving force behind one of the most effective anti-terrorist operations in modern history.

In 2012, President Obama appointed lifelong Democrat Flynn as head of the Defense Intelligence Agency (DIA), which is essentially the Pentagon’s internal CIA. During the Cold War, the DIA’s top mission was to assess Soviet military developments and armaments, which helped inspire Reagan’s defense buildup that won the Cold War. Then, as now, it was indispensable to our national security.

But friction soon developed between Obama and Flynn, who refused to bend his experienced military judgment to suit Obama’s political needs. That started with Benghazi, which occurred soon after Flynn took command of the DIA. Obama and Secretary of State Hillary Clinton told the world that the Benghazi attack was a spillover by an unruly mob angered by a film produced by an obscure, little-known California producer. President Obama even stood before the United Nations and told the whole world this fairy tale.

But military intelligence knew it was a heavily armed attack by trained combatants. After he was re-elected in 2012 on his political narrative that bin Laden was dead and Al-Qaeda was decimated, Obama conceded that the original movie story was untrue. Hillary Clinton, though, repeated the false political narrative about the movie to the faces of the grieving parents of the victims. If a Republican president had to admit that he had pressured professional military intelligence to alter their reports of known facts, the consequences would be incalculable.

But the friction between Obama and Flynn did not end there. Obama sought to ban the words “radical Islamic terrorism” from his administration. Flynn knew, and would not stop repeating, that those words were the true description of the enemy the military was fighting.

The Obama experience proves that Flynn is not afraid to butt heads with the military and civilian establishment for the good of the country, and that is exactly what we need in a national security advisor. Flynn’s years of experience enables him to realize that Russia faces threats from radical Islamic terrorism that are quite similar to those we face. He knows that an alliance between the United States and Russia could be fruitful, much like President-elect Trump has stated in recent pronouncements. However, Flynn has also not been afraid of calling Russian President Vladimir Putin what he is - a “totalitarian dictator and a thug.” It is this combination of realpolitik and staying true to our values that sets the lieutenant general apart, making him uniquely qualified to advise Trump on all security matters.

President Obama has left a power vacuum throughout the world. Other hostile states, like Iran, have taken advantage of that vacuum. Our enemies are emboldened and have gotten away with murder all over the globe. But I can assure you with Mike Flynn as national security adviser, we will move quickly and smartly to alter the course of events, and we will throw hostile actors in retreat with American military strength.

Flynn clearly harks back to an ethos reminiscent of Reagan. The former president differed from Richard Nixon, Gerald Ford and Jimmy Carter in the way he unabashedly stood for American values by projecting strength boldly before the Soviet Union's expansion. Yet Reagan also knew when U.S. and Soviet goals intersected, and his willingness to negotiate with them (albeit not on our core values) led to the signing of the Intermediate Nuclear Forces Treaty in 1987, which helped pave the way for the end of the Cold War.

General Flynn may be serving his country three decades after Reagan, but his national security policy can best be described as Reaganesque. Peace through strength is the only way to protect America’s interests while firmly facing the myriad security threats our country faces, from terrorism in the Middle East to Chinese expansion in the South China Sea. He is the man best suited to assume the crucial role of national security advisor. Our country will be well led.

Peter Ferrara is General Counsel and Principal at the Raddington Group. He served in the White House Office of Policy Development under President Reagan, and as Associate Deputy Attorney General of the United States under President George H. W. Bush.