The Collapse of the UN Security Council 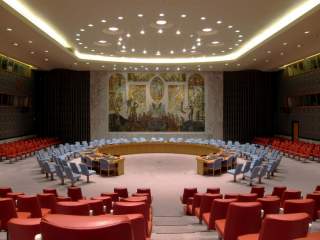 Although the 2016 U.N. meetings seem quite similar compared to others held over the last several years, this week’s debate comes at a time when the international community is inundated with problems in virtually every region of the world.  With the exception of a landmark peace agreement that ended five decades of conflict in Colombia, every region is experiencing some degree of threat that could spiral to a whole new level if the international community as a whole and regional governments in particular are unable to find a way to address them.  The list is endless and depressing: a humanitarian abomination in Syria and daily terrorist attacks in Iraq; the rise of anti-immigration parties in Europe and the biggest challenge to the EU since its foundation; a North Korea on a full tear towards a permanent nuclear weapons capability; Russia flexing its military and diplomatic muscle in the former Soviet Union; and China increasingly carving out more territory for itself in the South China Sea.

The United Nations was created nearly seventy years ago to ensure that crises that pop up around the world are either mitigated to the greatest possible extent or are solved in a way that doesn’t promote further conflict.  After tens of millions of people perished in World War II, the last thing the world wanted was a return to a full-scale armed conflict that produced nothing but more death and societal destruction.  At the top of the U.N. pyramid, of course, is the Security Council — a body of the world’s most geopolitically vibrant countries, each with a veto, responsible for the “maintenance of international peace and security” in global politics.  If an armed conflict, a natural disaster, an atrocity committed by a government, or a nuclear weapons breakout occurred somewhere around the world, it is up to the Security Council to determine the best course of action in a unified and collective way.  And in theory, every U.N. member state is required to uphold the council’s decisions.

Today, it isn’t a stretch to say that the Security Council is not living up to those obligations.  Indeed, what was originally thought to be a body where conciliation and unity between the world’s major powers would avert further war has changed into a forum that resembles a meaningless debating society.  But what’s even worse than a meaningless debating society is one whose membership is composed of highly antagonistic actors constantly at each other’s throats regardless of the issue.

On Syria, the rivalry and differences of opinion between the United States, France, and the U.K. on one side and Russia on the other has had a devastating impact on the Council’s work in general and on the Syrian civil war in particular.  When the U.S. Ambassador to the U.N. accuses Moscow of  duplicitous, hypocritical behavior in public and walks out of the chamber when Russia’s Ambassador gets up to speak during a meeting, the outcome is not only a deterioration in relations between two major powers but a further impediment to the Security Council’s work.

On South Sudan, a nation that has undergone such a horrific civil war over the past two and a half years that no one knows the full scale of the casualties, debate over an arms embargo on all parties to the conflict degenerates into a never-ending delay with no decisions made other than to do more of the same — a delay that allows the South Sudanese government and the rebel movement the opportunity to acquire more weapons and ammunition for further fighting down the line.

On nuclear non-proliferation, the Security Council hasn’t done much of anything.  Nuclear weapons reductions are the purview of Washington and Moscow, and if both are reticent to agree to further decreases in their arsenals and launch pads, there isn’t much the Security Council as a body can do about it.

North Korea presents an altogether different conundrum for the Security Council.  While the five permanent members all agree that stopping Kim Jong-un from further nuclear and ballistic missile testing and working towards the denuclearization of the Korean Peninsula is the long-term goal, commitment towards that goal varies depending on where one sits in the neighborhood.  And even when the Security Council passes comprehensive sanctions regimes on Pyongyang like they did this past March, implementation is a completely different story.

The purpose of pointing out all of these trouble spots is not to argue that the world is on fire.  It isn’t; global poverty is steadily declining, more countries in the developing world are finding it a priority to address climate change as a top-tier national security issue, and democratic systems of governance are still the name of the game.  The reason, rather, is to rehearse a tired argument that is nonetheless getting more prescient by the day: the Security Council has lost its luster and is no longer the elite decision-making body that its members often advertise.  Instead, it’s the international equivalent of the U.S. Congress — nasty words, politicization, and an inability to be pragmatic in order to achieve something of far greater significance than oneself.

Solutions will be hard to come by.  Enlarging the Security Council’s permanent membership in order to better conform to the 21st Century has long been a desire for those who want better representation in the system, but enlarging it could create more discord and gridlock if the rules and bylaws aren’t changed in the process.  I don’t know what the solution would be, but acknowledging what the problem is a good the first step.

Kevin Rudd, Australia’s former prime minister, has written that “while the UN today is not broken, it is in trouble.”  The Security Council, as part of the U.N., is just as bad.