The Comeback Caliphate: How ISIS Could Regain Control of Iraq 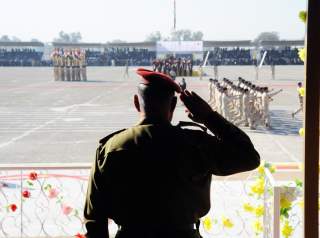 For a country that has been all too accustomed to terrible news over the last fourteen years, the liberation of Mosul was a big breath of fresh air for Iraqis of all ethnicities and sectarian affiliations. The Islamic State, an organization so incredibly inhumane and medieval that it makes Al Qaeda chief Ayman al-Zawahiri look like a grandfatherly scholar, outlasted its welcome in Iraq’s second largest city long ago. So when the Iraqi army, the elite counterterrorism service, the federal police and the U.S.-led multilateral coalition finally squeezed ISIS fighters from a small enclave in the old city along the Tigris River after nine months of brutal house-to-house, room-to-room combat, there was plenty for Iraqis to celebrate.

And yet despite this triumphant victory and the celebratory mood enveloping Baghdad, the Iraqi government is quickly squandering whatever goodwill it earned among Iraq’s Sunni population. The reconciliation, reintegration and reconstruction that is critical to rebuilding Mosul’s infrastructure and bringing the nation closer to an intercommunal awakening is instead being replaced by revenge, bloodlust and score-settling—the very conditions that assisted ISIS’s success in Iraq in the first place.

Reports of Iraqi security forces or pro-government militias committing human-rights abuses, illegal detentions of Mosul residents, and extrajudicial killings of ISIS detainees or sympathizers have become the norm during and after the Mosul operation. Human Rights Watch has documented numerous cases of Iraqi security forces randomly picking men and boys out of the crowd at checkpoints, beating them severely and taking them away to makeshift bases. Witnesses have told Human Rights Watch that some people have been killed at those bases, and it’s not unreasonable to assume that more have been tortured when they were interrogated.

Iraqi witnesses and victims have described how the families of ISIS members were rounded up and taken to rehabilitation centers. At the centers, they were screened to determine whether or not they supported the group’s ideology. None of the families that Human Rights Watch spoke to said that they were charged with any crime, and yet they were still held “against their will” by the very security forces that should have been protecting them.

New video footage released this month shows two ISIS detainees being thrown off a cliff by uniformed men. It is just the latest in a series of reported abuses where Iraqi troops or affiliated militiamen are depicted torturing terrorist suspects to elicit information. Those men are then executed. Indeed, when Iraqis are literally fishing out dead bodies from the Tigris River—some with faces so disfigured that it is impossible to identify them—it becomes clear that the lingering cloud of hatred and revenge that has been hovering over Iraq will continue to linger there.

That is, unless Iraqi prime minister Haider al-Abadi is politically strong enough to introduce some accountability.

Stopping the abuses perpetrated by the Iraqi security forces—or at least decreasing the amount of them—isn’t just a straightforward manner of respecting human rights and international humanitarian law. It is also a strategic necessity if Iraq is ever going to get out from underneath the sectarianism that has subjected the Iraqis to horrific violence and get away from incompetent governance of its many coalition governments. Indeed, it is precisely these types of abuses—often conducted by government forces and tolerated or ignored by the Iraqi army high command and officials in Baghdad—that made it easy for a band of bearded, nihilistic jihadists to swoop into northern and western Iraq and defeat a better-equipped army.

It was only a short three years ago when the predominantly Sunni residents of Mosul were clapping on the streets and honking their horns in jubilation as ISIS convoys were rolling by. Moslawis were happy, not so much because they were supporters of ISIS’s caliphate-building project or its interpretation of the world, but because the soldiers they viewed as unfair, corrupt and heavy handed were expelled from the area and taught a humiliating lesson. In those opening days and weeks, the citizens of Mosul, Tikrit, Ramadi and Fallujah were as likely to greet Islamic State militants as liberators from a disinterested and Shia-supremacist government as they are labeled criminals, marauders, rapists and mass murderers today.

If the Iraqi government doesn’t want to watch the same movie again in the not-so-distant future, then it needs to nip these issues in the bud early and often. Prime Minister Abadi must usher in a series of political and institutional reforms that will prevent the Iraqi security forces from displaying the atrocious behavior that a minority of them are displaying today. Reshuffling the security ministries, charging and prosecuting individual soldiers for war crimes, firing commanders and generals who encourage those abuses or fail to investigate them, and charging ministers or ministry employees who break the law and serve themselves rather than the Iraqi people won’t be smooth sailing for a prime minister who depends upon sectarian parties for his political future. But Abadi is running out of options. Indeed, unless Abadi wants to be known as a gentler version of former Prime Minister Nouri al-Maliki, there is simply no other way forward.

In the New Yorker, veteran correspondent Robert Wright asked the central question: “Can Mosul Be Put Back Together After ISIS?” The simple answer at this early stage is: we don’t know.

But one thing is certain: if Mosul and Iraq at large are to recover from ISIS and begin the long and difficult road of physical, social and political reconstruction, then it is Iraq’s politicians who will need to begin that recovery process. Nobody else—not the United States, the European Union, the Arab League, or the United Nations—has the ability to do it for them.