The Creeping Militarization of American Culture 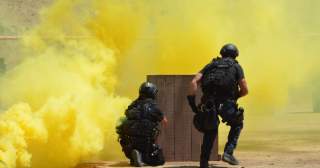 In his 1961 farewell address, President Dwight D. Eisenhower warned of the growing influence of the “military-industrial complex” on American politics and policy. Interestingly, Eisenhower’s original formulation of the menace was the even more accurate “military-industrial-congressional complex.” (Emphasis added). Seeing how that network of special interests has worked its tentacles into so many aspects of American political and economic life in the intervening decades indicates just how prescient was Eisenhower’s warning.

But there has been an even more subtle and pervasive militarization of American culture. It has been evident since World War II, but it has been accelerating markedly in recent years. Perhaps the most corrosive domestic effect of the global interventionist foreign policy that Washington adopted after World War II has been on national attitudes. Americans have come to accept intrusions in the name of “national security” that they would have strongly resisted in previous decades. The various provisions of the Patriot Act and the surveillance regime and its abuses epitomized by the NSA are a case in point.

The trend toward a more intrusive, militaristic state has become decidedly more pronounced since the September 11 attacks and the government’s response, but there were unmistakable signs even before that terrible day. My colleagues at the Cato Institute have done an excellent job documenting the gradual militarization of America’s police forces, beginning in the 1980s, with the proliferation of SWAT teams and the equipping of police units with ever more lethal military hardware. The terrorism threat simply provides the latest, most convenient justification to intensify a trend that was already well underway. Most SWAT raids in fact have nothing to do with terrorism; they are used to serve search or arrest warrants in low-level drug cases.

Politicians learned early that the fastest way to overcome opposition to a pet initiative was to portray it as essential to national security. Thus, the statute that first involved the federal government in elementary and secondary education in the 1950s was fashioned the National Defense Education Act. Similarly, the legislation establishing the interstate highway system was officially the National Defense Highway Act. In retrospect, President George W. Bush probably missed an opportunity when he did not label his legislation for a Medicare prescription drug benefit the National Defense Elderly Care Act.

And then there is the overall militarization of language. The rise of America’s imperial era coincides with the popular use of the “war” metaphor. In recent decades, we’ve had “wars” on everything from cancer to poverty to illiteracy to obesity. And, of course, we still have the ever present war on illegal drugs that Richard Nixon declared more than four decades ago. Language matters, and the fondness for such rhetoric is a revealing and disturbing indicator of just how deeply the garrison state mentality has become embedded in American culture.

Yet another sign is the growing tendency to misapply the term “commander-in-chief.”  The Constitution makes it clear that the president is commander-in-chief of the armed forces. There were two reasons for that provision. One was to assure undisputed civilian control of the military. The other was to prevent congressional interference with the chain of command.

One thing, however, is abundantly clear. The Constitution did not make the president commander-in-chief of the country. Unfortunately, that is a distinction that is increasingly lost on politicians, pundits, and ordinary Americans   The notion that the president is a national commander who can direct the country and it is our obligation as subordinates to salute and follow his lead is an alien and profoundly un-American concept. It also implicitly ratifies the perverse doctrine of the imperial presidency—that the president alone (our commander-in-chief) gets to decide when the nation goes to war. Both are thoroughly unconstitutional, ahistorical, and unhealthy attitudes. Yet they have become common, if not dominant, attitudes in late twentieth century and early twenty-first century America. And that is frightening. Viewing the president as the commander-in-chief of the nation is the epitome of a mentally militarized society.

At the dawn of the Cold War, social commentator Garet Garrett warned that America could not indefinitely remain a republic at home, enjoying the values of limited government and robust civil liberties, while taking on more and more trappings of empire abroad. Gradually, he predicted, the requirements of the latter would drastically alter and eventually eclipse the former. As in the case of Eisenhower’s Farewell Address, Garrett’s warning seems all too prescient.

Americans are rapidly approaching the point where they must make a stark choice. Either the United States adopts a more circumspect role in the world—in part to preserve what is left of its domestic liberties—or those liberties will continue to erode (perhaps beyond the point of recovery) in the name of national security. That choice will determine not only how the United States is defended in the future but whether this country retains the values and principles that make it worth defending.

Ted Galen Carpenter, a senior fellow at the Cato Institute and a contributing editor at the National Interest, is the author of ten books and more than 600 articles on international affairs. His latest book is Perilous Partners: The Benefits and Pitfalls of America’s Alliances with Authoritarian Regimes (2015).