The Danger of War without Sacrifice 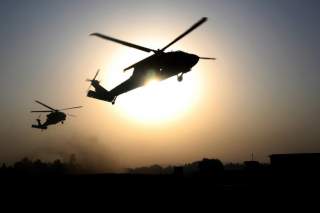 Donald Trump recently drew fire for his insistence that he had made sacrifices on a par with those of Khizr Khan, who spoke at the Democratic National Convention on July 28 and whose son Humayun was killed while serving in Iraq in 2004. Hillary Clinton praised Khan’s speech and “the ultimate sacrifice [Humayan] made for his country,” while Trump insisted that he had sacrificed by giving thousands of people jobs, by working hard, and by raising money for veterans.

Trump has rightly drawn ridicule for comparing his business deals to the loss of the Khans’ son, but one important thing has been lost among the guffaws emanating from the Democratic Party: the vast majority of Americans have sacrificed absolutely nothing in service of the great war machine that the United States has been running for the past fifteen years. This is no accident. Over the past four decades, the United States has chosen to build a model for the use of military force that minimizes as much as possible the costs that Americans must pay to deploy U.S. forces. Trump may not have sacrificed much, but neither have most Americans—and unfortunately, this is a necessary feature of the United States’ current foreign policy.

As I document in my book Cheap Threats, this low-cost model of American force started to take shape at the end of the Vietnam War. When the United States eliminated the draft in 1973, it did so in response to the deeply unpopular war in Southeast Asia and to criticism that the draft was unfair: young men who could afford to attend college, for example, were able to obtain deferments that allowed them to avoid military service. The movement to the all-volunteer force (AVF) has enhanced the training and professionalism of the United States’ military, but it has also insulated policymakers from criticism they would no doubt face for starting and maintaining two wars of choice in the Middle East while going after militants in Pakistan, Yemen, Libya and elsewhere. It is simply unimaginable that the United States would still have troops in Iraq and Afghanistan and that a former Senator who voted for the Iraq War would be the Democratic Party’s presidential nominee if the United States still drafted young Americans into military service.

The AVF has not been a perfect solution to the United States’ military-manpower problems. When the wars in Iraq and Afghanistan stretched the AVF to the breaking point, the United States turned to short-term military contractors because it could not attract enough individuals to volunteer for military service at the going rate of compensation. Reservists and National Guard units were called up repeatedly, with little advance notice or training, to be recycled through these war zones so that Presidents Bush and Obama did not have to make the tough decision to call up draftees. The brave individuals who have served in the United States’ armed services since 2001 have sacrificed greatly (and so have their families), but they constitute a stoic minority among a vast public that has little or no direct experience of the toll these conflicts have taken on America’s men and women in uniform. During the Second World War, everyone knew someone who was serving in the military; now, the active forces and veterans are a seldom-acknowledged minority who—in the eyes of many members of the elite—get what they deserve by volunteering for service. This is no “greatest generation” bonded together by common ideals of service and sacrifice.

Although Americans no longer face the possibility of conscription for themselves or their children, they remain remarkably intolerant of casualties resulting from American military operations. Knowing this, policymakers are choosing to use force in ways that minimize risks to those who are part of the AVF. For example, the United States is increasingly opting for military campaigns conducted entirely from the air and made possible by the rise of precision-targeting technologies, beginning with the 1999 NATO campaign over Kosovo and seen more recently with the 2011 operation to oust Muammar el-Qaddafi (at the start of the operation, President Obama explicitly pledged not to send U.S. ground troops). Similarly, the drone campaign allows the United State to use force without placing American troops at risk and in places where the United States is not formally at war. As the “War on Terror” drags on, the growing reliance on small groups of special operations forces and military “advisers” constitutes another variant of this trend toward low-footprint and tightly limited operations that seek to inflict targeted damage while minimizing exposure for both soldiers in the field and policymakers in Washington. All of these strategies for the use of limited force from a distance—what we might call “standoff strike warfare”—are politically attractive for policymakers who know that the American public is leery of additional long-term commitments overseas, but these strategies are not fostering and will not generate the long-term political outcomes (stability in Libya, for example) in which the United States is interested.

“Hold on,” you say—“doesn’t the United States spend a huge amount of money on defense every year? How can we say that Americans don’t have to pay anything to use force overseas? Aren’t cruise missiles expensive?” It is true that the American defense establishment costs a lot. In 2015, the United States spent about $600 billion on defense, which was more than the next seven biggest spenders combined. Relative to the size of the American economy, however (nearly $18 trillion in 2015), this is not a large figure—a little more than 3% of annual GDP. In the early Cold War period, the United States routinely spent nearly 10% of GDP on defense annually. By contrast, the United States spent about 16.4% of its GDP on healthcare last year. In other words, the baseline cost of the U.S. defense establishment might seem high in absolute terms but is quite modest compared with historical trends.

Most importantly, the operating costs of the wars in Iraq and Afghanistan have generally circumvented normal budgeting procedures: much of the operating expenses for these wars came from special supplementary budget requests. Americans did not have to shoulder these additional costs through tax increases, however; instead, at the height of these wars Congress passed major tax cuts at a cost of at least $1.5 trillion (or $2.8 trillion if we include the extensions passed in 2011). To put this in perspective, the wars in Iraq and Afghanistan are estimated to have cost about $1.26 trillion through 2011. Instead of paying for America’s wars of choice with current revenues, policymakers in Washington turned to deficit spending to finance these two wars while handing out tax cuts and passed the bill for these foolish conflicts on to our children and grandchildren.

Why does this matter? These changes in the manner in which the United States conducts its military operations have paralleled the expansion of executive authority over foreign policy. The Obama administration asserted in 2011 that it did not need Congressional approval for the Libya intervention because of the “limited” nature of the operation. Similarly, we have been told that the most recent bombings of Libya in August 2016 are permitted under the authorization for the use of military force passed by Congress in the immediate aftermath of September 11, 2001. In other words: no oversight is necessary or possible.

It is no accident that the United States has evolved a model for the use of military force that shields Americans from the costs of U.S. action overseas. If the public does not have to pay, why would they bother to protest? This does not imply that there has been a long-running conspiracy to eliminate checks and balances from America’s foreign-policy apparatus. Instead, pressure from an American public unhappy about wars in the Middle East combined with advances in technology and commitment to a liberal interventionist foreign policy pushed successive administrations to develop this standoff strike model of warfare, while the fear of international terrorism allowed Americans to tolerate an overreaching executive branch. When we combine the standoff strike model of warfare with these recent expansions in the scope of executive power, we have a truly frightening foreign-policy machine: a model for the use of force that costs the vast majority of Americans nothing (at least in the short term) and an executive who thinks (s)he is entitled to use force without congressional approval. This is not a recipe for making prudent policy in a democracy, nor does it promise to be an effective long-term strategy for securing the United States’ interests.

Donald Trump may not have sacrificed much, but the vast majority of Americans have not had to make any sacrifices in service of the United States’ wars, either. Ask yourself: what have YOU sacrificed for the war effort? Unless you or someone in your immediate family served in the military in the last fifteen years, the answer is probably “nothing.” The standoff strike model of warfare reflects a desire to shield a war-weary American public from the true costs of the United States’ interventionist foreign policy in exchange for a diminished capacity to coerce target states and a steadily expanding interpretation of the president’s powers. Until and unless something happens to supplant the standoff strike model, the United States is likely to continue to blunder along using cheap force in limited and ineffective ways for the foreseeable future.