The Dealmaker-in-Chief Goes to Jerusalem 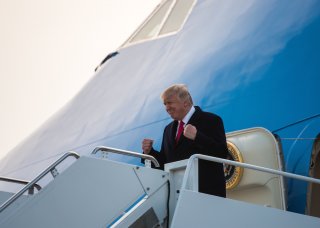 President Donald Trump and his top national-security aides could use a nice vacation overseas for a couple of days. The last week in the Washington scrum has been downright brutal for the administration, and the president hasn’t made things any easier on himself or his press shop with the sudden firing of the FBI director. You know you need to get out of town for a breather when some lawmakers are already talking about impeachment.

Fortunately, Trump will have that opportunity to get out of Dodge with his trip to the Middle East and Europe. The multinational tour, ending with a G-7 meeting and some informal discussions with America’s European allies, is a chance for the president to get back into a statesmanlike role and to change the narrative of Trump the scandal maker to Trump the deal maker. Trump’s many critics may laugh at this possibility, and claim that this scenario borders on fantasyland, but if there’s anything we should have learned about The Donald since he first strolled down that escalator in Trump Tower to announce his candidacy, it’s that it would be self-defeating to count this man out—or underestimate his capacity to make news.

This week’s trip overseas will be Trump’s first as commander in chief. And the trip couldn’t have come at a more consequential time for the Middle East. To say that there are several security crises going on simultaneously would be an understatement; very little is going right. That’s why the president’s visit to Saudi Arabia, Israel and the Palestinian territories is so important at this particular time—he can look some very important people in the eyes, take their pulse and directly push a peacemaking agenda that would start to freeze some of these conflicts, bring others closer towards a sustainable diplomatic process and build some semblance of a “day after” that would serve U.S. national-security interests in the region. Given the intense sectarian nature of some of these conflicts—particularly in Syria, where the civil war has long deteriorated into a regional proxy war with Arab states on one side and Iran and the Russians on the other—implementing policies that alleviate the violence may be too much to hope for. Trump, however, can’t miss an opportunity to at least get America and its Arab allies on the same page.

The top agenda item for Trump during the trip will be the Israeli-Palestinian conflict, that never-ending dispute that has made every U.S. president since Harry Truman look like a diplomatic amateur. National Security Adviser H. R. McMaster didn’t rule out the possibility of getting Israeli prime minister Benjamin Netanyahu and Palestinian Authority president Mahmoud Abbas in the same room for a photo op, so there may some interesting fireworks during the trip. It’s simply not in President Trump’s nature to sit back and show the saintly patience that so many of America’s Middle East envoys have demonstrated over the years, so a Netanyahu-Abbas meeting would be grist for the Trump mill: a potential diplomatic breakthrough in a conflict that is a living metaphor for frustration and failure, and a picturesque photo seen around the world.

If Trump happens to pull this off, props to him. It’s been enormously difficult to get Netanyahu and Abbas—two men who don’t like one another very much and view one another as the main reason why Middle East peace has been a pipe dream for over a decade—to force them to shake hands, let alone pressure them to dive into the substance of where the borders should be drawn, which settlements should be frozen and how the Palestinian refugee issue should be dealt with. If, as is very likely, a breakthrough doesn’t occur, Trump shouldn’t get himself into a tizzy or feel personally slighted. Men and women with far greater diplomatic experience than him have left the Holy Land with nothing but migraines and heart disease. Trump will want to shock everybody with his dealmaking ability and prove all of his critics wrong, showing that he is indeed the man with a plan. But he’d be wise to let rationality overtake his emotions and ego, because rushing into a negotiating process and badgering Netanyahu and Abbas to start talking to each other won’t force men to offer the concessions required to move the ball down the road.

Will anything come of Donald Trump’s first foreign trip? Time will tell. But even if success is fleeting, at least he’ll have the freedom to get out of the Beltway bubble for a couple of days and put this Russia and Comey stuff to the back of his mind—that is, if he stays away from his Twitter account and shuts off the television on Air Force One.