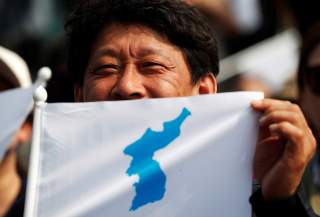 The global reaction to the dramatic reduction in tensions between the two Koreas is one of profound relief. That response was evident regarding the cordial atmospherics at the Winter Olympics, and it has grown more pronounced since then. The sight of North Korean leader Kim Jong-un stepping across the de facto border at the Demilitarized Zone was powerful symbolism. Perhaps even more important was the agreement that Kim signed with South Korean president Moon Jae-in formally ending the state of war that began with North Korea’s 1950 invasion of the South.

Such behavior certainly is preferable to Pyongyang’s usual insults that its rival is a U.S. lackey or, even worse, the periodic threats to turn Seoul into a sea of fire. A few months ago, North Korea’s missile and nuclear tests, combined with the regime’s shrill rhetoric, brought fears to a fever pitch that a new Korean war might erupt. The Trump administration’s blunt warnings to Pyongyang, the deployment of additional U.S. air and naval forces to Northeast Asia, and the president’s inflammatory references to Kim as “little rocket man” added to the worries.

The onset of détente between North and South Korea is a decided improvement on that situation. But as my colleague Doug Bandow points out, the inter-Korean summit produced far more “sizzle” than substance. There are still several daunting obstacles to a comprehensive peace settlement—especially one that includes Pyongyang giving up its nuclear-weapons capability. Kim has indicated his willingness to take that step, but how sincere his promise might be is highly uncertain.

Experts are sharply divided in their assessments about the likelihood of a final accord. Some are optimistic, contending that prospects for a deal are good, if for no other reason than Kim understands now that it is the only path to regime survival. Others are much more pessimistic, noting that Pyongyang has yet to make truly meaningful concessions and that North Korean charm offensives have occurred before without leading to lasting beneficial results. Given Pyongyang’s pervious behavior, critics contend that the regime is inherently untrustworthy.

As with most issues in international affairs, the devil is in the details. There has been considerable talk about what concessions Pyongyang must make, but very little about what Washington is—or should be—prepared to concede. And that consideration is crucial, because the United States is the 800-pound gorilla with respect to peace prospects on the Korean Peninsula.

Previous statements from Pyongyang indicate that North Korea has a number of explicit policy objectives. One is to have a formal peace treaty ending the Korean War. The bilateral agreement that Moon and Kim just signed is an important step, but China and the United States (or, technically, the United States. representing the United Nations) were also belligerents in that conflict. Is the Trump administration willing to sign on to an agreement officially ending hostilities?

North Korea has long sought formal diplomatic recognition from the United States, including the exchange of ambassadors. Washington declined to recognize the communist regime, even when Beijing and Moscow finally established diplomatic relations with South Korea at the end of the Cold War. Is the United States now prepared to recognize the Democratic People’s Republic of Korea as a legitimate state?

Beyond a peace treaty, Pyongyang has sought an end both to the unilateral economic sanctions the United States has imposed over the years and the multilateral sanctions that have mushroomed because of U.S. pressure on other countries and the United Nations. Is Washington ready to lift its own sanctions and induce the UN to terminate its sanctions regime? If so, would that change mean an end to all sanctions or only to those involving goods that unarguably have no military applications?

Other significant North Korean demands include an end to the annual joint military exercises between U.S. and South Korean forces. Are Washington and Seoul willing to end those maneuvers, and if so, under what conditions? What about Pyongyang’s recent demand that the United States remove all “nuclear and strategic assets” from South Korea—and who determines which assets fall into that category?

North Korea’s broader objective always has been for the United States to withdraw all of its military forces from South Korea and terminate the bilateral military alliance with Seoul. If Pyongyang persists in that demand, is the Trump administration willing to take such a step, even if a secure, comprehensive peace accord is reached?

The denuclearization issue is likely to remain the most crucial aspect—and the most difficult sticking point. Are U.S. leaders prepared to consider anything less than the DPRK’s full denuclearization? That step would require the supervised shipment of existing warheads out of the country, the demolition of all nuclear facilities, and intrusive inspections to ensure compliance, both now and in the future. What is the U.S. response if Pyongyang balks at agreeing to any of those measures?

Finally, if the Kim regime caves on the denuclearization issue, is Washington prepared to offer (perhaps jointly with China) a security guarantee to the DPRK? That is not a minor consideration. North Korean leaders have cited Washington’s double-cross of Libya’s Muammar el-Qaddafi after the Libyan leader relinquished his country’s embryonic nuclear program. How far is the White House willing to go to reassure the North Koreans that the United States is now out of the forcible regime-change business?

Developments at the Olympics and the Moon-Kim summit represent a step in the right direction, but only one step. It might be appropriate at this point to purchase a bottle of champagne to celebrate the prospect of peace on the Korean Peninsula, but it is far too early even to put that bottle on ice, much less to pop the cork. That last action must await not only the Trump-Kim summit, but successful negotiations flowing from that meeting to address and resolve the many thorny, substantive issues.

Ted Galen Carpenter, a senior fellow in defense and foreign policy studies at the Cato Institute and a contributing editor at the National Interest, is the author of ten books and more than 700 articles on international affairs. His books include (with Doug Bandow) The Korean Conundrum (Palgrave Macmillan, 2004).