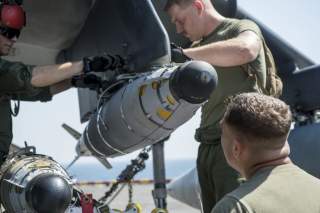 Last Thursday USA Today published a stunning article revealing that since August 2014 the U.S. Air Force has fired more than 20,000 bombs and missiles against Islamic State (ISIS) targets in Iraq and Syria.  The expenditure has, according to the article, depleted the Air Forces’ “stocks of munitions and prompting the service to scour depots around the world for more weapons and to find money to buy them.”

The article included a comment by a defense industry consultant lamenting the fact Congress has “capped defense spending” leaving too few missiles in the inventory.  Curiously, no one seems to be asking the much more fundamental question: why should Congress appropriate money to further increase missile stockpiles when the staggering expenditure hasn’t strategically dented the non-state enemy?

In fact, it may not simply be that we have failed to defeat ISIS.  The strategic situation may be worse after the expenditure of 20,000 bombs than before the first struck its target.  According to a report cited by the Associated Press this past summer, a multi-agency intelligence estimate suggested that the first year of bombing not only failed to accomplish strategic objectives, but saw the ISIS threat expand.

According to the article “intelligence analysts see the overall situation as a strategic stalemate: The Islamic State remains a well-funded extremist army able to replenish its ranks with foreign jihadis as quickly as the US can eliminate them. Meanwhile, the group has expanded to other countries, including Libya, Egypt’s Sinai Peninsula and Afghanistan.”  If the situation were only that we were wasting billions of dollars on a failing strategy, it would be appalling.  But there are second and third order effects at play few seem to consider which together place American national security at increasing risk.

At a time when every service chief is telling Congress that sequestration is killing readiness, the Department of Defense is now going to have to spend billions of those limited dollars to replace the missiles and bombs thus far expended, leaving even fewer dollars for readiness and training.  But there is an additional consequence that should be given more consideration.  The depletion of so many thousands of missiles leaves the US conventional forces with dangerously few in the event we face an unexpected conventional fight.

On August 1, 1990 anyone suggesting that in the foreseeable future the US would send half a million soldiers to fight in a full-on conventional war would have been dismissed as embarrassingly naive.  Saddam Hussein grossly miscalculated the next day when he invaded Kuwait and in a day the unthinkable suddenly became probable.  Given the tensions rising between Russia and the West and in the Asia Pacific with an increasingly aggressively China, the possibilities of unexpected conventional war cannot be dismissed.

If the US has launched 20,000 bombs and missiles against a non-state actor with no air force, navy, or modern army, how many might be required against a major world power with modern armed forces?  What if an unexpected and unavoidable war were thrust on us in the near future?  ISIS represents a legitimate terrorist threat, but is not an existential threat to the US.  A war against either Russian and Chinese forces most assuredly would.  How would the Department of Defense, Congress or the Administration explain to the American people that our armed forces couldn’t effectively blunt an enemy attack because we ran out of missiles?

Such a situation could be catastrophic for the United States and our interests abroad.  In a time of zero sum defense dollars, it is crucial that Washington reassess its military strategy against ISIS.  Hoping that we don’t get into a conventional fight in the near future while wasting limited resources on a failing strategy in the present puts our national security at unnecessary risk.