The Kim-Moon Summit Was All Sizzle and No Substance 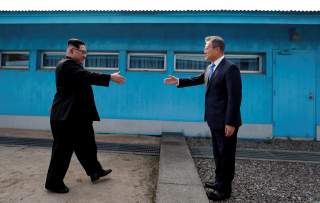 The meeting between South Korean president Moon Jae-in and North Korean Supreme Leader Kim Jong-un was picture perfect. Their objectives promised cooperation and peace. The symbolism of the summit could not have been better.

But what the two leaders decided matters little until they act on their promises. And that won’t happen unless President Donald Trump and Kim reach a symbolic and practical agreement. While that is possible, it won’t be easy.

The good of the Korean tete-a-tete is obvious. Two previous South Korean presidents ventured north. This is the first time a North Korean leader has traveled south, even if but a short distance, into the Republic of Korea. Moon plans to visit Pyongyang in the fall and Kim said he is willing to visit Seoul.

Moreover, Kim looked and acted like a modern figure, not a Stalinist caricature, joking about disturbing his counterpart’s sleep with missile tests and acknowledging the poor condition of the North’s roads. Kim also brought both his wife and sister—previously, the North’s rulers kept women, even family members, largely invisible, especially overseas. Kim demonstrated spontaneity, encouraging Moon to step over the demarcation line into the North.

The two leaders walked together past a South Korean honor guard and engaged in talks during which time all the right words were expressed. Kim was quoted as saying: “I came here to put an end to the history of confrontation.” Moon and Kim set as objectives negotiating and cooperating on various issues, reuniting divided families, ceasing “hostile acts,” formally ending to the Korean War, which remains only in abeyance through an armistice, establishing a liaison office in the border town of Kaesong, and undertaking phased disarmament. They also “confirmed the common goal of realizing, through complete denuclearization, a nuclear-free Korean Peninsula.”

There were some smaller practical positives as well. For instance, before the summit the two countries established a direct phone link between the two leaders. Irrespective of the pleasantries expressed by the two leaders, so long as the peninsula is loaded with military personnel and materiel, conflict remains possible. Creating a communication channel could help keep the peace.

That outcome creates a positive atmosphere for the Trump-Kim meeting, which is expected in May or more likely in June. Moon previously said he saw himself as a mediator: “What we can do is to try to help the North and the United States reach an agreement, helping them narrow their differences and seeking and presenting practical ideas both sides can accept.”

Despite the obvious value of the summit, it is important to remember that all of this has occurred in the past. Kim is a better diplomat than his father or grandfather. However, the dynasty’s founder, Kim Il-sung, was set to meet South Korean president Kim Young-sam, only to die shortly before that planned summit. Kim Jong-il, father of the current ruler, hosted two South Korean presidents: Kim Dae-jung and Roh Moo-hyun, for whom Moon was chief of staff. Kim’s father also met Secretary of State Madeleine Albright and almost scored a summit with President Bill Clinton.

These meetings led participants to hold hands, sing patriotic tunes, exchange heartfelt compliments, and even dance a bit. Out of the summits emerged the “Sunshine Policy,” which transferred some $10 billion in money and aid to the Democratic People’s Republic of Korea. The Kaesong Industrial Zone was opened, eventually attracting more than 120 South Korean firms and yielding some $90 million in hard currency to the North annually.

Within just a few years, however, the Sunshine Policy was kaput, North Korea was conducting both nuclear and missiles tests, the North and South were exchanging artillery fire, the DPRK was testing ICBMs along with nuclear weapons, and the U.S. president was threatening to unleash “fire and fury” in return. The two sides have different explanations as to why things went so bad so quickly. But obviously nothing about peace on the peninsula can be taken for granted.

Moreover, the only summit that really matters is between Trump and Kim. Unless Moon is willing to send American troops home, he will always be the junior partner in the alliance with America. And that means accepting Washington’s willingness to go to war “over there,” in Sen. Lindsey Graham’s infamous words, irrespective of the cost to the two Koreas and their neighbors. The Republic of Korea could scarcely escape the consequences of conflict between the United States and North Korea.

Although Moon has done his best to create a positive environment for the planned Trump-Kim meeting, several important questions remain:

– Is Kim willing to yield up weapons that cost so much to develop, are so tied to his dynasty’s legitimacy, give the regime international status, and offer the only sure deterrent to overwhelming American conventional power? Even if Kim is theoretically willing to do so, then what security assurances will he demand, given Washington’s dangerous proclivity for regime change, unwillingness to defend Ukraine, which yielded its nukes, willingness to take out Muammar el-Qaddafi after he surrendered his, and readiness to tear up past agreements, such as the JCPOA with Iran?

– Is Trump willing to offer more than verbal assurances and paper guarantees to Kim in exchange for full and irreversible denuclearization? Does Trump understand that while his threats increased Kim’s incentive to talk, they also increased Kim’s need for more than meaningless promises like those offered to Libya and Ukraine? Would Trump put the U.S. troop presence in South Korea on the table, since sixty-five years after the end of the Korean War the Republic of Korea is fully capable of providing for its own defense?

– Is it possible to create an inspection regime that can certify to Washington’s satisfaction the elimination of unknown nuclear weapons and unknown missiles from unknown locations? Would such an intrusive system, so inconsistent with the North’s past emphasis on independence, be acceptable to Pyongyang? Could the Republic of Korea, the United States, Japan and other nations ever be certain that the DPRK had eliminated its nuclear and missile capabilities?

– If the Big Nuclear Deal proves beyond reach, then are the two leaders willing to settle on a more modest agenda? Would they consider beginning small, with a shared commitment to common goals accompanied by small steps forward to expand cooperation and build confidence? Are Kim and Trump willing to consider intermediate steps which would leave the North a nuclear power but nevertheless make both nations—as well as South Korea and neighboring states—more secure?

– If the Trump-Kim summit fails to occur or ends in failure, then can Kim and Moon develop a relationship and implement policy to keep the peace if Trump returns to threatening war? Accounts differ on the details, but apparently Clinton considered military action against North Korea and was in part dissuaded from doing so by South Korean president Kim Young-sam. Could Moon find a path to peace if it turns out there is none to denuclearization?

– Is the United States willing to step back and invite China forward if doing so increases Pyongyang’s willingness to denuclearize and Beijing’s willingness to offer security guarantees for North Korean disarmament? Is Washington prepared to forego hopes to forever use South Korea as a base with which to contain the People’s Republic of China? Will Trump put America truly first by choosing peace rather than attempting to maintain U.S. dominance?

The Kim-Moon summit was a positive affair, but it was little more than an appetizer. The main meal is yet to come. Much more remains to do to yield a different result than in the past, when hope for peace seemed to fill the peninsula.

It is important to remember that the focus of Washington and other states should not be the upcoming summit. The principal objective for all should be keeping the peace. Denuclearization is but a means to that end. There may be a better chance than ever before of eliminating North Korea’s nukes, but there are important reasons to be skeptical that Trump will achieve that result—and the DPRK’s Kim does not pose the only barrier. If denuclearization fails, then there still will be a peace to keep.