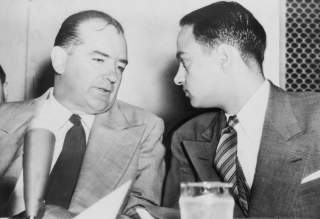 Donald Trump brings many defects to his new role as the GOP standard-bearer. Such defects have led Trump’s opponents to make allegations that range from hysterical to sleazy. In the former category are the growing number of speeches and articles that imply (and in some cases outright assert) that Trump is a closet Nazi. In the latter category are the even more rapidly mounting allegations that he is a Russian sycophant, if not a Russian agent. That smear constitutes a new McCarthyism. And it is especially ironic that liberal Democrats, the principal victims of the original McCarthyism during the early Cold War, are the main perpetrators this time.

The theme of Trump as a Russian agent (a “Siberian candidate”) received a major boost following his comments about the massive hacking of the Democratic National Committee’s e-mails. Trump opined that if the Russians were engaged in such systematic cyber espionage, it reflected a lack of respect for the current political leadership of the United States. That is a familiar GOP trope, and an especially unfair one in this case. Nations with good cyber espionage capabilities spy on all targets they deem relevant, and have done so for many years. The United States has even been caught spying on close allies such as Germany.

Trump’s statement might have passed with minimal notice, but he then added sarcastically that if the Russians had done so, he hoped that they had Hillary Clinton’s thirty thousand missing e-mails. His critics immediately spun that comment to suggest that he was urging Russia to undermine America’s security. That is a preposterous interpretation. If anyone put U.S. security at risk, it was Clinton, who had used a private e-mail server without the robust security features of government servers. And since she has already testified that there is nothing in those missing e-mails of a sensitive nature, how could Russia’s possession of such worthless items damage America’s security?

Now the Washington Post reports that two dozen GOP foreign-policy hawks have indited a letter to congressional leaders demanding an investigation into the hacking of DNC emails. They say that “this is not a partisan issue” but “an assault on the integrity of the entire American political process.” It is true that the signers have different reasons for writing Congress. Some like Ret. Gen. Michael Hayden have a longstanding concern about cyberattacks from abroad. But the animating spirit behind the letter is David Kramer, an impassioned neocon crusader. Another signer is the prominent neocon Elliott Abrams. The overall impression left behind by the letter is that it is precisely what the signers allege it is not—a de facto attempt to damage the Trump campaign. The fact is that the FBI is already investigating the DNC email hack. There is no cogent reason for a congressional investigation, other than an attempt to politicize the event.

The barrage against Trump for that comment is just part of a larger offensive. Trump has angered advocates of a new Cold War against Russia on numerous occasions. He has stated that he believes his administration could get along well with Vladimir Putin. He questioned NATO’s expansion to Russia’s doorstep and hinted that the alliance’s military maneuvers in Eastern Europe might be needlessly provocative. He has stated that the European countries, rather than the United States, should deal with any problems they might have regarding Russia’s actions in Ukraine. Those and other comments have caused critics to brand Trump as a Putin stooge.

The effort to discredit Trump and his foreign policy views extends into the Trump campaign organization. Opponents have attached great importance not only to Trump’s business dealings in Russia, but those of campaign manager Paul Manafort and other aides as well. They also attacked the Trump campaign for insisting on softer language in the GOP party platform about aid to Ukraine rather than explicitly embracing proposals for military assistance. Apparently that was evidence of undue Russian influence, too.

Trump is only the most recent and prominent victim of the new McCarthyism as it applies to policy toward Russia. Princeton University professor Stephen F. Cohen, a long-time distinguished scholar regarding that part of the world, has had his motives impugned and his reputation sullied because he dared advocate a conciliatory policy toward Russia.

The new McCarthyism would be reprehensible simply because of its intrinsic unfairness. But there is a larger reason to oppose it. The original McCarthyism badly chilled foreign-policy debate in the 1950s and beyond, producing dangerous stereotypes and rigidities. It was a major factor that prevented the American people and U.S. policymakers from recognizing that a civil war in far off Vietnam was just a civil war and not part of a Soviet/Chinese communist global offensive. That tragic miscalculation cost fifty-eight thousand American lives and more than one million Vietnamese lives.

There are plenty of reasons to dislike Donald Trump. His views on immigration, as they apply to both Hispanics and Muslims, can accurately be termed xenophobic. His willingness to embrace torture as an interrogation technique recalls some of the worst excesses of George W. Bush’s administration. And his apparent fondness for unconstrained executive power should alarm even the most passionate advocates of that doctrine, which, ironically were mostly found on the left side of the political spectrum in recent decades. But we must not allow the new McCarthyism to chill debate about how to deal with Russia. Proponents of a hardline policy who smear Trump and other advocates of accommodation do their country a monumental disservice.

Ted Galen Carpenter, a senior fellow in defense and foreign policy studies for the Cato Institute and a contributing editor at the National Interest, is the author of ten books and more than six hundred articles on international affairs.