The New Normal: Sending Troops to Afghanistan and Forgetting They Exist 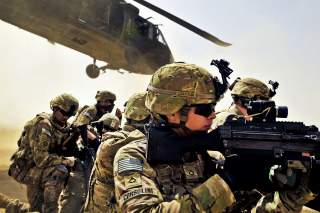 The handwriting is on the wall: Whether it’s a strategically sound policy or not, it’s likely the Trump administration will authorize the Pentagon to deploy an additional three thousand to five thousand U.S. troops to Afghanistan to ostensibly prevent the Taliban from capturing more territory.

While the details are not yet out, administration officials are saying the exact things one would expect before a sizable troop increase. Gen. John Nicholson, the U.S. commander in Afghanistan, requested additional troop strength in February during a congressional hearing, selling it as the only way to stop the situation from getting worse. In his annual Worldwide Threat Assessment, Director of National Intelligence Dan Coats wrote that “endemic state weaknesses, the [Afghan] government’s political fragility, deficiencies of the Afghan National Security Forces, Taliban persistence, and regional interference will remain key impediments to improvement.” Lt. Gen. Vincent Stewart, the director of the Defense Intelligence Agency, all but brought in a flashing red light to the Senate Intelligence Committee earlier this month, warning that “we’ll lose all the gains we’ve invested in over the last several years” if Washington doesn’t do something. Coming from a military man, that “do something” means more U.S. soldiers, more trainers, more advisers, more intelligence, surveillance and reconnaissance assets, more of everything.

No one disputes the intelligence community’s assessment of Afghanistan. The security situation has been deteriorating markedly over the past year. Quarterly reports from the Special Inspector General for Afghanistan Reconstruction have been a bevy of bad news; the latest tallied a record number of civilian casualties, a record number of security incidents with insurgents, a total of 2,135 Afghan army and police killed or wounded during the first two months of this year (an average of thirty-six people a day), and eight million Afghans now under Taliban control (an increase of 3.4 million over the previous year) aren’t signs that the status quo is working. Nobody in their right mind would argue that Afghanistan is showing progress.

Yet if current battlefield dynamics in Afghanistan are troubling, the embarrassing lack of public debate in the United States about whether it’s appropriate to send more U.S. and NATO troops into the country is almost un-American.

With the notable exception of some lawmakers—like North Carolina Republican Rep. Walter Jones, who has pressed for a national debate on Afghanistan policy for a long time now—you could be mistaken for traveling around Washington and assuming the United States is no longer at war in Afghanistan. Washington has forgotten about Afghanistan. It has forgotten that 8,400 Americans in uniform are still operating in very dangerous circumstances. The war in Afghanistan is literally at its most violent, and yet national news, for one reason or another, is uninterested in covering it.

This would be justifiable if there weren’t any Americans left in Afghanistan, or if the United States were experiencing another peace dividend. But that isn’t the case at all.

The men and women of the U.S. armed forces are engaged in so many conflicts against so many non-state entities in so many countries and across so many continents that it’s remarkable the Pentagon can keep track of them. Indeed, every week, there are headlines (barely mentioned on television) reporting that yet another shipment of U.S. soldiers out of Fort Bragg or Fort Benning are being sent on another overseas deployment—a few dozen special operators are headed to Somalia or another four hundred U.S. advisers in northern Syria. In Afghanistan, we’re talking about thousands of personnel.

This is not how the Founders wanted the American Republic to operate during a time of war. Before U.S. troops are asked to sacrifice their lives for a dangerous mission, the nation has an inherent duty to have an intense and fruitful discussion about whether the sacrifice and cost is absolutely necessary to defend U.S. national-security interests. The elected among us would hold a debate on the House and Senate floors before forking an additional five, ten, or fifteen billion dollars for the mission. The country’s goals and objectives must be thought through to determine if they are even achievable. And all the implications, second-order and third-order effects must be reviewed.

America, in other words, must be as prepared as possible before sending troops to a conflict.

Promoting responsible government, being a diligent spender of taxpayer money and serving as a check on the executive branch are supposed to be the norm rather than the exception.

Unfortunately, that’s not how Washington has operated for far too long. War plans are rarely questioned by senior lawmakers, and when they are lawmakers typically focus on whether more troops and money need to be thrown at the problem. If a lawmaker wants a debate on the vital national-security interests at stake or to uphold his or her constitutional responsibility, then that person is out of luck unless a privileged resolution is filed to force the issue. And when an administration is sending feelers out to the public that more U.S. soldiers may be preparing to deploy into a combat situation, the nation is told to defer to the field commanders, and Congress is expected to provide the funds required to accomplish the objective, doubts and pushback be damned.

The United States is on the verge of increasing the size of its force in Afghanistan by nearly 60 percent, and the news media and our politicians are more interested in talking about the firing of James Comey than a war that is deep into its sixteenth year—and could very well go on for another sixteen years. If our Founders were alive, they would be appalled.