The North Korea Crisis Is Coming to a Boil. It's Time for Fresh Thinking. 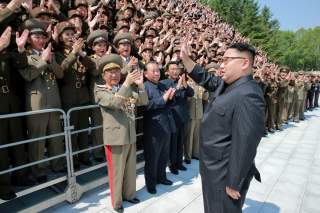 Presidents Donald Trump and Moon Jae-in met for the first time in Washington. It was a pairing of opposites. President Moon is a serious person: son of refugees, served in the South Korean army, jailed for opposing the military dictatorship and human rights lawyer. President Trump is, well, Donald Trump.

Their ideologies differ as well. The South Korean leader is a man of the left, critic of the Republic of Korea’s corporate-dominated economy, proponent of labor rights and advocate of engagement with North Korea. America’s president has few fixed beliefs on anything, including the Koreas. He dismissed the value of the U.S.-South Korea alliance while talking of both bombing the Democratic People’s Republic of Korea and meeting its leader, Kim Jong-un—but then effectively turned policy over to his hawkish secretaries of defense and state.

No doubt, both sides will offer a sunny description of the summit’s outcome. Even before arriving in the United States, President Moon minimized differences between the two. However, tensions may grow dramatically as they consider policy toward the Democratic People’s Republic of Korea (DPRK). Even if Seoul formally agrees with President Trump’s policy of “maximum pressure, maximum engagement,” they are likely to interpret it differently. And implementation is likely to vary significantly as well.

Already President Trump has expressed his displeasure at President Moon’s reluctance to move ahead with the THAAD missile defense system, after declaring that the Republic of Korea (ROK) should pay a billion dollars for it. Any attempt by the Moon government to reopen the Kaesong Industrial Complex or offer aid to the North would trigger a confrontation with Washington—and might violate U.S. and UN sanctions. The Trump administration’s threats to attack the DPRK, which could engulf the peninsula in war, would threaten to rupture relations from the other direction.

Unfortunately, the allies have no good options. Preventative air strikes would be reckless. Tougher sanctions would require China’s cooperation to be effective. Negotiation would be hopeless if focused on denuclearization.

I visited the DPRK two weeks ago. The North Koreans with whom I spoke unequivocally dismissed any willingness to abandon their nuclear program through negotiation. They blamed Washington for Pyongyang’s decision to develop nuclear weapons. America has been following a “hostile policy” highlighted by “military threats” and “nuclear threats.” U.S. aggression and regime change were evident in Iraq and Afghanistan. The North would meet “military force with military force.”

There’s obviously more here, North Korean behavior is important in assessing allied policy, but the Kim dynasty reasonably fears the threat of regime change. And Libyan dictator Muammar el-Qaddafi’s experience—violent ouster, public torture and street execution after negotiating away his missile and nuclear programs—is sufficient to dissuade most anyone from trusting the Trump administration’s assurances that it is not interested in regime change.

Which essentially leaves the United States and South Korea without a viable strategy. They can express the outrage of “the international community” whenever the North launches a missile or tests a nuke. But the North won’t pay any attention.

As the DPRK expands the size of its nuclear arsenal and the reach of its missiles, it will eventually create a deterrent against U.S. military intervention. If Pyongyang has a reasonable chance of destroying even a couple of American cities, Washington’s defense commitment to the South becomes dramatically riskier. Any U.S. attempt at preventive war, suggested by President Trump a couple months ago, would prompt almost certain retaliation. Even involvement in a conventional conflict pursuant the U.S.-ROK mutual defense treaty would risk triggering a strike on the American homeland: indeed, any hint of even a conventional plan to liberate the North would leave the Kim regime no alternative but launch or surrender, and the latter seems unlikely.

This situation would weaken the alliance, perhaps fatally. U.S. security interests in the Korean peninsula after the Cold War are modest. Nothing there warrants Washington risking a nuclear attack on the American homeland. Thus, the United States would have to reconsider its commitment, especially since the South is well able to defend itself conventionally. In fact, there is no reason sixty-four years after hostilities ended on the Korean peninsula for Washington to continue to protect the ROK.

At the same time, Seoul could not help but wonder if America would live up to any security commitment that could result in a nuclear strike on the U.S. homeland. Washington might continue to formally maintain a “nuclear umbrella” over the South. But if the North used nukes against South Korea, would Washington retaliate knowing that the DPRK could take out several U.S. cities in return? The ROK couldn’t count on America, no matter how many promises the latter made.

What to do? The two nations’ presidents could regularly get together and hug one another, proclaiming that all is well. Or the countries could consider a more controversial response.

For instance, Washington could phase out its troop presence and security commitment. After more than six decades, it is time for the South to take over responsibility for its defense. South Korea has forty times the GDP and double the population of the North—it should have left America’s defense dole long ago.

More important, U.S. disengagement would take America off of North Korea’s target list. The North is seeking to deter the United States by threatening retaliation, not attract it by planning aggression. Indeed, the simplest way to end fears of a North Korean missile targeting the U.S. homeland is for Washington to exit the Korean confrontation. America would no longer loom large in Pyongyang’s affairs.

While Seoul could create a conventional military capable of deterring and defeating that of the DPRK, the latter’s possession of nukes would still give it a dramatic military advantage. South Korea should restart the nuclear program, with America’s backing, in order to create its own deterrent. Afterall, Seoul shut down its nuclear program after U.S. pressure a half century ago.

The situation would be hardly ideal, but the United States would no longer find itself at nuclear risk in between the two Koreas. At the same time, the South’s security would not be dependent on America’s dubious promise to risk the destruction of its homeland. Moreover, the mere prospect of nuclear weapons proliferation to the South, but also Japan, would give China additional incentive to take a more active role in limiting the North’s nuclear arsenal. If that happened, the case for neighborly proliferation would disappear.

The American and South Korean leaders are meeting at a difficult time. Not only are both countries in the midst of unsettling domestic political transitions, but the DPRK has proved itself to be a nuclear power, unwilling to abandon the weapons which have become central to its national identity.

The status quo—an outdated conventional alliance and a risky nuclear umbrella—no longer meets the security needs of both alliance partners. Seoul and Washington need to consider unconventional alternatives. Their discussions should start now.