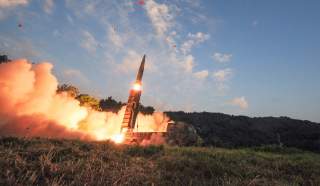 Just when cautious optimism was beginning to resurface that the North Korea crisis might be fading slightly, Pyongyang took yet more actions to alarm the international community. Kim Jong-un’s government announced that it had conducted another nuclear test. The latest move came just days after the launch of an intermediate-range missile that flew directly over Japan’s northernmost island before breaking up and splashing down in the western Pacific.

The nuclear test was even more alarming than the missile test. Pyongyang stated that, unlike North Korea’s previous underground detonations of atomic bombs, this one was a much more destructive hydrogen bomb. Seismic data confirmed that the explosion was approximately five times larger than previous tests. The North Korean government also insisted that the device was designed to be placed on an intercontinental ballistic missile (ICBM). A missile with that range would be capable of reaching targets on the west coast of the United States, and perhaps beyond.

Those two episodes underscore the urgency for a drastic change in Washington’s policy regarding the Korean Peninsula. Indeed, such a shift in policy should have been taken years ago. The risk-benefit calculation for America in continuing to take the lead role in deterring North Korea is now tilting alarmingly toward the former.

Although the latest developments are worrisome, there is no need yet to assume that North Korea currently poses a mortal threat to the American homeland. The North’s boast that it has been able to miniaturize the apparent hydrogen weapon for deployment aboard a missile should be viewed with considerable skepticism. So, too, should Pyongyang’s assertion that it already possesses missiles capable of striking the continental United States. More sober analyses point out that although Pyongyang has tested components of an ICBM, as well as testing at least three intermediate-range missiles, such achievements are not the same as a successful, full-range ICBM test. Moreover, even the more limited tests have hardly been flawless. The missile fired over Japan, for example, apparently came apart during re-entry—a defect noted in several previous tests as well.

At the same time, complacency on the part of U.S. leaders and the general public is unwarranted. It is clear that Pyongyang is making rapid strides in both its nuclear and missile programs. Within a few more years, North Korea will have the ability to attack the American homeland. The real danger is not the prospect of an unprovoked strike out of the blue. Contrary to the panicky mythology that American hawks cultivate, there is no evidence that North Korean leaders are suicidal. They fully realize that any nuclear attack on the United States would lead to massive retaliation and the annihilation of the communist regime.

However, while such direct deterrence remains quite credible, there is always the danger of a miscalculation. The development of a robust North Korean nuclear arsenal and delivery system also significantly erodes the credibility of extended deterrence—Washington’s commitment to risk nuclear war to protect such allies as Japan and South Korea. A bold North Korean leader might very well wonder whether U.S. leaders would really chance the destruction of American cities to protect third parties, even valued allies.

The credibility dilemma of extended deterrence often troubled Washington’s European allies during the Cold War, and was a key reason why NATO members sought not only multiple assurances but the presence of U.S. troops as a tripwire to guarantee that the United States would honor its commitment if Moscow challenged it. The East Asian allies now face a similar problem involving a far more unpredictable adversary.

Various analysts have argued recently that the United States must climb down from its long-standing demand that North Korea abandon its nuclear and missile ambitions. Instead, they advocate moving to a new policy based on negotiations, containment and deterrence. Such proposals are more realistic than the current bankrupt approach insisting that Pyongyang return to nuclear virginity, and they are far more prudent than reckless suggestions that the United States consider launching a preemptive conventional or nuclear attack.

However, they still contain the central defect of retaining America’s role as the lead player in trying to contain and deter Pyongyang. Washington’s chief objective instead should be to reduce America’s risk exposure in Northeast Asia’s increasingly dangerous strategic environment.

That means recognizing the reality that primary deterrence has greater credibility than extended deterrence. In other words, it is time for North Korea’s neighbors to acquire their own nuclear deterrents, with America’s blessing. Unfortunately, too many American officials, political figures and pundits believe that all forms of nuclear proliferation are equally bad. That is not true, and in any case, nuclear proliferation is already far advanced in Northeast Asia. When China, governed by a dictatorial regime, and North Korea, a bizarre communist monarchy, already have nuclear weapons, it is misplaced to fret about stable, status quo–oriented democracies such as South Korea and Japan possessing modest nuclear deterrents.

Moving to empower Tokyo and Seoul in that fashion is necessary to credibly deter North Korea over the coming decades. During the 2016 presidential election campaign, Donald Trump indicated that he would not necessarily object to Japan and South Korea acquiring independent nuclear arsenals. He should return to that position. A doctrine of mutually assured destruction between North Korea and its noncommunist neighbors, along the same lines as the relationship between the United States and the Soviet Union during the Cold War, is hardly an optimal solution. But it beats having America continue being on the front lines of a potentially catastrophic confrontation. It is time to offload that risk to the countries that have the most at stake in deterring North Korea.