Is the Pentagon Feeding Obama Bogus Intel on ISIS? 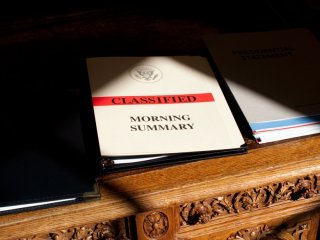 Is the United States winning or losing the war against the Islamic State in Iraq and Syria?

The question, although simple, cuts to the heart of the matter—one that policymakers in the executive branch, members of Congress and candidates running for president have been asking themselves ever since the U.S. Air Force dropped the first smart-bombs on ISIL targets fifteen months ago. If the answer is “yes,” then the Obama administration doesn’t have to worry about the constant clamor coming from its Republican critics that more U.S. military force—including the deployment of additional U.S. personnel on the ground is required to turn the situation around. If the answer is “no,” President Barack Obama and the National Security Council will need to gather in the Situation Room, reassess what elements of the strategy are working and which are falling short, and brainstorm new ideas in order to plug any shortfalls that may exist.

And yet, none of this is at all possible without honest, forthright, and unvarnished assessments from the men and women of the U.S. intelligence community who are responsible for providing the president, the secretary of defense, the NSC and the State Department with the information they need in order to fix what’s broken and amplify what is successful. Without good information, policymakers tasked with implementing the counter-ISIL strategy are twisting in the wind, carrying out a war plan based on intuition and assumption.

This is exactly why allegations that senior leadership at U.S. Central Command, which overseas the war against the Islamic State, manipulated or changed the assessments of lower-level analysts is so concerning. According to multiple press reports from The New York Times, the Inspector General’s investigation is specifically inquiring whether and to what extent senior CENTCOM intelligence officials spun what would have been more pessimistic reports of the war into a conclusions that were far more positive than the realities of the ground suggested. Assessments that were gloomy were supposedly ignored, sent back down the chain of command for revision or revised at the top levels of the CENTCOM intelligence hierarchy before being passed along to the president and his staff. As Matt Apuzzo, Mark Mazzetti and Michael Schmidt of the Times reported over the weekend, the accusations are so serious that the chairmen of the House Intelligence, Armed Services and Defense Appropriations committees are establishing their own joint investigation alongside the Inspector General.

As concerning as the claims, however, is the fact that at least fifty analysts within CENTCOM have signed up to the formal complaint given to the Inspector General. This case, in other words, is not about a few rogue or disenchanted analysts complaining that the bosses are ignoring their judgments; rather, it is one of the most significant allegations of intelligence tampering since the Saddam Hussein WMD debacle.

Guidance signed by James Clapper, the Director of National Intelligence, is abundantly clear about how analysts in the intelligence community should act, how they should conduct themselves during the intelligence assessment process and what type of behavior is inappropriate. “Analytic assessments must not be distorted by, nor shaped for, advocacy of a particular audience, agenda, or policy viewpoint,” Clapper’s directive reads. “Analytic judgments must not be influenced by the force of preference for a particular policy.”

Because there is an ongoing investigation from the Inspector General’s office, those on the outside looking in cannot and should not jump to conclusions. Any number of things inside CENTCOM could have happened, including the very real possibility that there was and remains a legitimate disagreement between the analysts and CENTCOM leadership about how well the counter-ISIL strategy is working. And yet the complaints are so serious and potentially damaging to the entire policy against the Islamic State that members of Congress are appropriately launching their own investigations about the claims being put forth.

In ordinary circumstances, congressional committees would wait for the Inspector General to finish the work before making a determination that further investigation is necessary. But at a time when the United States is in the middle of a war and leading a multinational military coalition against the barbarism that ISIL represents, the country has no choice but to ensure that the president is receiving the most accurate and impartial intelligence about the state of the conflict. The United States cannot defeat the Islamic State if its political leadership is not being delivered the best information available—free of political interference, as the Intelligence Community requires.

House Intelligence Committee Chairman Devin Nunes and House Armed Services Committee Chairman Mac Thornberry are within their rights to look into these allegations. Ranking Members Adam Schiff and Adam Smith should join their Republican colleagues in the pursuit of the truth. Getting the intelligence right and preventing the very same mistakes that occurred before the invasion of Iraq in 2002 and early 2003 is too important is an effort that both Republicans and Democrats can and should support.