The President Is Right: It Is Time to Leave Syria 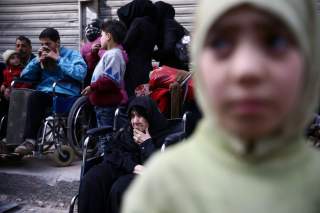 The latest apparent chemical weapons attack by the Syrian government triggered predictable demands that Washington act. But there are no good options, especially ones consistent with the wishes of an American president who plans to withdraw militarily and an American people who five years ago made clear they did not want to get more deeply involved militarily. However, the assault will make it harder for President Donald Trump to exit Syria.

Trump might be president, but when he announced that he wanted to withdraw U.S. troops from Syria, his officials reacted with horror. He can’t possibly mean it, they complained.

However, that’s what he said during the campaign. And he reiterated that position in early April: “Sometimes it’s time to come back home.” After all, the trillions of dollars spent on wars in the Middle East had resulted in “nothing except death and destruction.” He concluded: “I want to get out. I want to bring our troops home.”

So his staff staged an intervention of sorts, browbeating the president into submission. He agreed to delay action. Explained one unnamed official: “We’re not going to immediately withdraw but neither is the president willing to back a long-term commitment.” If he brings up the issue again, they undoubtedly will use the same tactics as often as necessary to make involvement de facto permanent. In fact, the Pentagon just deployed more troops to the town of Manbij, which Turkey had threatened to attack. And some response to the Assad regime’s latest apparent use of chemical weapons seems likely.

The president suggested that Saudi Arabia might “have to pay” the United States to stay, but Washington should not hire out its military personnel as mercenaries to the Saudi royals. An American, Master Sgt. Jonathan Dunbar, died in Syria at the end of March, a victim of an improvised explosive device. (A British soldier, Sgt. Matt Tonroe, was killed in the same incident.) No amount of cash from the Saudis could make up for Sgt. Dunbar’s death.

Presidential spokeswoman Sarah Huckabee Sanders said the president wanted “our allies and partners in the region, who have a lot more at risk, to put more skin in the game.” But they won’t do so if we insist on doing everything. For years a mix of angry hectoring and humiliating begging has had minimal effect on allies from Asia to Europe to the Middle East. The way to get them to do more is for the United States to do less.

However, Washington is filled with social engineers who want America to do much more. And they have hysterically high expectations, promising that America’s 2000-man force will remake not only Syria but the entire region.

For instance, in January then-Secretary of State Rex Tillerson offered an expansive agenda: Washington planned to wipe out ISIS, force Bashar al-Assad from power, block Iranian influence in Syria and compel Russia to agree to a democratic Syria. This was not just mission creep, but mission leap, dramatically expanding Washington’s objectives.

From what stemmed such magical thinking? America’s social engineers had failed, usually spectacularly, in Iraq, Libya, Afghanistan, Yemen and Syria. Go back further to Ronald Reagan’s disastrous intervention in the Lebanese civil war. To argue that Syria would be different was to imagine the triumph of fantasy over experience.

Moreover, the Middle East doesn’t matter much to America anymore. No hegemonic power threatens the West’s oil lifeline, as during the Cold War. Energy markets have dramatically expanded; America. soon will become the world’s biggest oil producer. Israel is a regional superpower, recently shooting down unarmed Palestinian protesters without fear of consequence. Washington need not risk lives and waste wealth to police the ever turbulent and unstable region. There is no need for America to continue defending the indefensible.

Naturally America’s self-professed allies want the United States to remain. For instance, Saudi Arabia’s crown prince declared: “We believe American troops should stay for at least the mid-term, if not the long-term.” However, Riyadh has the world’s third largest military budget, only to largely abandon the fight against ISIS in order to brutally attack Yemen. Washington should stop coddling countries able to defend themselves.

Are any serious American interests at stake in Syria?

President Trump expressed outrage at the Assad regime’s apparently violation of the chemical red line, but responding effectively would require a major expansion of U.S. military involvement, which Americans made clear five years ago they do not support. Uncle Sam expresses outrage today, but his hands are dirty: the Reagan administration assisted Saddam Hussein’s regime in acquiring and using chemical weapons against Iran. Although chemical weapons seem particularly horrid, they are not mass killers, like nukes, and in Syria they have taken far fewer lives than bullets and high explosives. Even if the president desires to punish the Assad regime, ground involvement in Syria’s continuing civil war makes no sense.

Defeating the Islamic State was the other task candidate Trump supported. And that goal has been achieved—roughly 98 percent of the “caliphate” has been swept away. However, a State Department envoy, Brett McGurk, warned: “We want to keep eyes on the prize—on ISIS—because ISIS is not finished.”

An anonymous official told the Wall Street Journal: “If we leave sooner rather than later, then there is a good chance that this could be all for naught and they could come back.” Another unnamed official told the Guardian: “We are faced with a situation now of 2200 fighters, who will be tough to move, entrenching themselves along the border with Iraq. We do not have the numbers, or the force protection to take care of that by ourselves.” Another policymaker told CNN: “It is a huge gamble that ISIS is not going to come back and that we are going to rely on others to stabilize Syria.”

Complained ever-hysterical Sen. Lindsey Graham, withdrawal would “be the single worst decision the president could make,” akin to the Obama administration’s withdrawal from Iraq. (Actually, President Obama followed the Bush administration timetable, and Americans left because that’s what the Iraqi government decided. Had the United States remained those forces would have become a target for Sunni and Shia radicals alike.)

But why must America take on the ISIS remnant? The United States initially intervened because the Islamic State had metastasized as a result of sectarian conflict in Iraq and brutal multi-sided civil war in Syria. Iraq has stabilized and the Assad government has largely won. It beggars imagination that these two governments, along with Turkey, Saudi Arabia, Iran, Russia, Kurdish forces and miscellaneous insurgents cannot deal with the Islamic State’s remaining two percent.

In any case, small Islamic State contingents are of little concern to America: ISIS inspired rather than planned terrorism. Fighting to preserve its nearby territorial remnant, not organizing distant terrorism, remains the Islamic State’s priority. The far greater terrorist threat to America comes from Saudi Arabia’s misbegotten war in Yemen, which has encouraged the growth of al-Qaeda in the Arabian Peninsula, long the most effective offshoot of Osama bin-Laden’s original operation.

What of Syria’s Assad? Matthew RJ Brodsky of the Security Studies Group contended “Remaining in eastern Syria allows the United States to deny Bashar al-Assad access to vital oil fields and the financial means to rebuild the territory of his loyalists while starving his opponents.” The Obama administration’s Frederic Hof said failing to fund “stabilization” efforts “would be opening up the area to the Assad regime and to Iranian-led Shiite militias, and of course this will instantly set the stage for the return of extremism and terrorism.” The ever-interventionist Washington Post warned that the president’s comments “will surely encourage Russian and Iranian hopes of driving the United States out of the country, so they can entrench their military bases and political influence.”

Such comments—calling them arguments gives them too much credit—ignore the fact that the territory is Syrian and Syria is a sovereign state. Only military force can prevent the Damascus government and its allies from operating there. Doing so makes American an undeclared belligerent and aggressor.

Even if successful, this effort will only temporarily weaken Assad. And the effect will last only so long as Washington stays. What interest impels the United States to undertake a permanent military occupation of another nation without constitutional warrant and in violation of international law?

Assad is a nasty character, but that does not set him apart from other Middle Eastern nations or numerous American allies. Perhaps the United States should occupy Saudi Arabia’s oil fields and force the kingdom to stop funding Islamic radicalism, supporting autocracy and war throughout the Mideast, and oppressing its own people. In fact, who rules Damascus doesn’t matter much to America. Throughout the Cold War Syria was hostile and allied with the Soviet Union, but posed no threat to the United States. Damascus is hostile to but no match for Israel.

The carnage in Syria has proved destabilizing beyond its own borders, witness the migrant flood into Europe, but that does not warrant American military action. And by intervening Washington has inflamed rather than constrained the fighting, spreading chaos. Encouraging the Kurds to battle various domestic and foreign forces would only keep the conflict alive.