The Price for Peace in Syria Is Cooperation with Assad 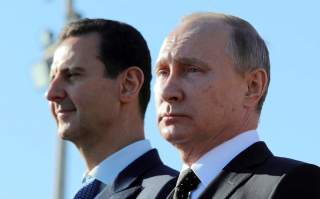 Two unpleasant propositions about the lengthy civil war in Syria have been substantially absent from current policy discussions. It seems time to bring them forward and to take them seriously.

The first acknowledges that the forces of Syrian president Bashar al-Assad have pretty much won the war. As journalist Robin Wright noted recently, Assad has managed to “consolidate his hold over the majority of Syria” and now “controls all the major cities.” Grandstanding bombings devised to encourage the regime to kill with bullets and shrapnel rather than with gas are exercises in futility. As she concludes “Assad is . . . winning the war and the reality is that the military strike will not change that.”

And in February, a U.S. intelligence community report concluded that, “the Syrian opposition’s seven-year insurgency is probably no longer capable of overthrowing President Bashar al-Assad or overcoming a growing military disadvantage.”

The second proposition is a stark observation put forward in a think tank report in 2015 by Ambassador James Dobbins and his colleagues: “any peace in Syria is better than the current war.”

For those whose chief concern is the welfare of the Syrian people, the conclusion, however painful, should be obvious. The United States and other intervening states should work primarily to bring the suffering to a substantial close, and this likely means cutting off support to most rebel combatants in Syria and working with—perhaps even directly supporting—Assad and his foreign allies.

This would, of course, constitute a massive reversal in policy—as well as a grim admission that the Russians have been essentially right in the civil war. But, although a great many elements in the Syrian tragedy remain cloudy, it seems clear that foreign assistance to the rebels has simply had the result of prolonging, or systematically stoking, the disaster. For years, much of the fighting has consisted of the mindless lobbing of ordnance on civilian areas, a process that mainly creates misery and refugees. All, or just about all, present policy proposals concerning Syria would essentially perpetuate this dismal condition.

There is a risk, of course, that, once something of a peace has been secured, Assad’s forces will embark on murderous rampages against former enemies. But it is more likely that this danger can be effectively dealt with if the United States and other interveners are inside the tent rather than outside of it.

The country would be effectively partitioned, with pockets still controlled by various rebel groups from U.S.-supported Kurds to Islamist operatives. And there would also be Islamic State remnants to deal with. Following the Dobbins proposal, this condition might prevail for years as efforts are made to negotiate difficult settlements.

But the very considerable bulk of the country would be substantially pacified. As a result, many refugees might find it safe to return and to help rebuild their shattered country.

And it is clear that a considerable portion of Syrians prefer being in government areas rather than areas controlled by rebels who are often incoherent and vicious. Details are sketchy, but given the choice, two-thirds of civilian evacuees from rebel-held East Aleppo asked to settle in government areas, not in rebel-controlled areas. One Aleppo professor, himself an opponent of the regime, estimates that in an election today, Assad would get more than 70 percent of the vote.

As early as 2014, Graham Fuller, a Middle East specialist and former vice chairman of the CIA’s National Intelligence Council, pointed out that although Assad “is hardly an ideal ruler,” he “is rational, has run a longtime functioning state,” and scarcely represents a threat to the United States. Moreover, Assad is supported by many in Syria who “rightly fear” the “domestic anarchy” that might come after his fall. The lessons of Libya are clearly relevant here.

Fuller concluded that “The time has now come to bite the bullet, admit failure, and to permit—if not assist—Assad in quickly winding down the civil war in Syria.”

This suggestion was highly unfashionable at the time, and then, like the Dobbins assessment, it was overwhelmed for a while by hysteria over the rise of the vicious, if ultimately rather ridiculous, ISIS group. However, although the perspective remains very much a minority view, its time may well have come.

John Mueller is a political scientist at Ohio State University and a senior fellow at the Cato Institute in Washington, DC.