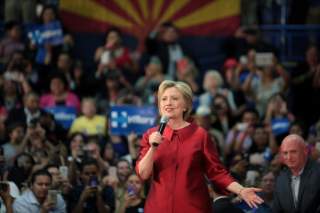 “He is not just unprepared,” she continued, “he is temperamentally unfit to hold an office that requires knowledge, stability and immense responsibility.”

Trump presents a rich target. His views are an incoherent jumble of mostly bellicose rhetoric, intermixed with occasional sensible comments about how U.S. foreign policy has failed. His criticisms of the elites that dominate U.S. foreign-policy circles are not grounded in any identifiable theory of international politics. He claims to abhor nuclear weapons, but at other times exhibits an almost cavalier attitude toward nuclear proliferation and even nuclear use. His views on trade are ignorant and short-sighted. His views on immigration, generally, and toward Muslims, specifically, are worse – vicious, hateful, beneath contempt.

But while she scored points against Trump, Clinton did not answer questions about her own foreign-policy views, and the foreign-policy consensus that she represents. That there is a bipartisan agreement on the basic tenets of U.S. foreign policy doesn’t mean that criticism of at least some of these tenets is beyond the pale. That one of these critics is ignorant of basic facts and generally comes off as uninformed doesn’t mean that all other critics are.

In fact, America’s foreign-policy elites have much to answer for, from major bipartisan catastrophes such as Iraq, to minor ones, such as the ill-considered war in Libya. Accordingly, I had hoped to hear in Clinton’s speech a serious reflection on the successes and failures of U.S. foreign policy over the past two decades, and useful suggestions on how she would advance American security at reasonable cost.

What we got instead were tired bromides about American leadership (“strong alliances; clarity in dealing with our rivals; and a rock-solid commitment to the values that have always made America great”) and a blinkered celebration of the crucial role that the United States plays in securing world peace: “I believe with all my heart that America is an exceptional country – that we’re still, in Lincoln’s words, the last, best hope of earth….We lead with purpose, and we prevail.”

Washington’s track record is considerably more complicated than that, and Clinton surely knows this. After all, she claims to now regret her decision to vote for George W. Bush’s ill-fated war in Iraq in 2002.

Clinton also overstates the role that U.S. alliances have played in ensuring global peace and security, and especially in terms of nuclear nonproliferation. She claims, for example, that Trump’s suggestion that he would “withdraw our military support for Japan,” would inevitably “encourage them to get nuclear weapons.”

It is true that American security guarantees have likely discouraged countries such as Japan -- as well as South Korea and Germany -- from developing nuclear weapons. But this is not the only factor. The vast majority of the world’s countries have chosen to remain nonnuclear, and very few are sheltered under the U.S. nuclear umbrella or secured with tens of thousands of U.S. troops serving as so many tripwires. Meanwhile, U.S. foreign policy has also encouraged (inadvertently, to be sure) a few states to defy or renounce the NPT and to embark on the costly and dangerous road toward becoming a nuclear-weapon state.

Clinton might also have reflected on the fact that some U.S. wars have had horrible unintended consequences. At a minimum, she should have answered questions about when she believes military intervention is justified, and whether these views evolved over time as she has seen the consequences play out.

For example, does Clinton believe the costs of the Iraq war would have been justified if Iraq had had the nuclear weapons that the Bush administration intimated that they did? Was Israel justified in striking the Syrian nuclear reactor in 2007? Or Iraq’s Osirak in 1981? Should the United States have bombed North Korean nuclear facilities in 2006, as Ashton Carter and William Perry urged the Bush administration to do? These are all important questions; she didn’t answer them.

Lastly, Clinton should have reflected on the fact that wars fought chiefly for humanitarian reasons have had unintended consequences, including nuclear proliferation. As evolving international norms have steadily eroded sovereign rights, some countries have sought other means for protecting themselves from foreign intervention. This includes developing nuclear weapons as a deterrent. This process did not start with the Iraq war, though that likely accelerated it. Iran, and certainly North Korea, felt a renewed urgency to acquire a nuclear deterrent after witnessing what happened to fellow Axis of Evil member Iraq. But Bill Clinton’s rough treatment of nonnuclear Serbia in the late 1990s might also have factored into their decisionmaking.

The worst case, in my opinion, was the Libya war of 2011. It is now clear that foreign intervention, though undertaken with the best of intentions, had awful side effects. Qaddafi had agreed to abandon his nascent nuclear program in exchange for assurances that he would be readmitted into the international community as a member in good standing. A few years later, he was dead, and his country was in chaos. Pyongyang pointed to this as proof that they had made the right decision in not giving up their nuclear weapons, and renewed their vow that they would never do so.

Hillary Clinton pushed a reluctant President Obama to intervene militarily in Libya. She has subsequently said that the Libyan intervention was “smart power at its best.” She chortled after the dictator was injured by a U.S. drone, and then brutally killed by rebels on the ground, “we came, we saw, he died.”

That sounds like the sort of thing that Donald Trump would say.