The Real Reason North Korea May Start a War 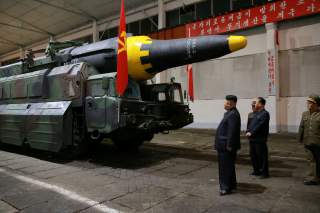 If you listen to the administration today you would think America was a small, virtually defenseless country threatened by a gaggle of hostile great powers. The latest national-security crisis involves the vast, globe-spanning empire of North Korea. Director of National Intelligence Daniel Coats declared on NBC that the North “has become a potential existential threat to the United States.” He apparently sees Pyongyang’s armored divisions, aircraft carriers, air wings and nuclear-tipped missiles encircling the beleaguered United States.

The U.S. military vastly outranges the North’s armed forces—spending upwards of one hundred times as much. America sets the technological standard for the world, while much of North Korea’s materiel is old and decrepit. With the world’s most sophisticated nuclear arsenal and 1411 warheads (the peak was 31,255 about fifty years ago), Washington could incinerate the North in an instant. Pyongyang is thought to possess around twenty nukes of uncertain deliverability.

Who poses an existential threat to whom?

But Coats is not the only Washington official prepared to run screaming from the room when North Korea is mentioned. Last month Defense Secretary Jim Mattis told the House Armed Services Committee that the North is the “most urgent and dangerous threat” to world peace and security. The DPRK’s nuclear program “is a clear and present danger to all,” he added.

Gen. Joseph Dunford, chairman of the Joint Chiefs of Staff, warned the same committee that North Korea’s behavior posed “an increasing threat to the U.S. and our allies.” Indeed, Pyongyang’s development of long-range missiles “is specifically intended to threaten the security of the homeland and our Allies in the Pacific.”

The American people appear to have been listening. A recent CNN poll found that 37 percent of Americans believe the DPRK poses an “immediate” military threat to the United States and 67 percent of them favor sending U.S. troops to defend South Korea.

The irony is that the latter position is largely responsible for the former challenge. If the North poses a threat to America, it is because America first posed a threat to the North.

Of course, there is nothing good to say about the Kim dynasty, now on its third generation. The regime has brutalized North Korea’s population and frightened the DPRK’s neighbors. Most Americans would love to consign Pyongyang’s present rulers to the ash-heap of history.

Unfortunately, North Korean elites know that. After all, the United States intervened to defend the Republic of Korea after the 1950 DPRK invasion and would have liberated the entire peninsula had China not intervened. Gen. Douglas MacArthur then advocated using nuclear weapons, a threat also employed by the incoming Eisenhower administration to encourage conclusion of an armistice.

Once that agreement was reached, the United States forged a mutual defense treaty with the South. During the ensuing years the American government maintained a garrison in South Korea and supplementary units nearby, such as Okinawa. It stationed nuclear weapons on the peninsula, regularly conducted joint military exercises with the South, sent naval forces—including aircraft carriers—off of the North’s coasts and flew strategic bombers over North Korea. It also insisted that “all options were on the table,” meaning military action.

As Washington presumably desired, Pyongyang officials noticed such activities and did not view them as friendly. Of course, North Korea was dangerous, especially when it still possessed the military backing of the People’s Republic of China and Soviet Union. But America’s military measures clearly posed an existential threat to the North Korean regime.

The U.S. danger was exacerbated by the end of the Cold War, when first Moscow and then Beijing opened diplomatic relations with South Korea. While the People’s Republic of China today helps keep the North afloat economically, the former would not back the latter in a war with America. The DPRK is truly alone, against its southern neighbor with vastly greater resources backed by the globe’s sole superpower. That is a lonely position.

It would be serious enough if Washington was simply defending its allies. But the Kim regime has seen the United States promiscuously intervene militarily around the globe. American administrations have used the armed forces to promote regime change in Grenada, Panama, Haiti, Afghanistan, Iraq and Libya. The government of the latter was so foolish as to trade away its nukes and missiles, leaving it vulnerable to outside intervention. The United States also tried to capture a dominant warlord in Somalia, intervened to prevent secession in Bosnia, dismembered Serbia, and backed the invading Saudis in Yemen.

If there ever was a case of a paranoid state having a real enemy, it is North Korea.

Pyongyang officials point to this reality. Obviously anything said by the DPRK government should be taken with a grain or two of salt, but there is little reason to doubt the concerns they express over potential U.S. military action. When I visited the North last month, North Korean officials dismissed criticism of their nuclear program, pointing to America’s “hostile policy,” which has been highlighted by “military threats” and “nuclear threats,” the latter, in their view, dating back to the 1950s.

No doubt one purpose of the DPRK’s nuclear weapons is to defend against such “threats.” Nukes have other uses as well, of course, such as enhancing Pyongyang’s international stature, cementing the military’s loyalty to the regime, and creating opportunities for neighborly extortion. But long-range missiles have only one use: deterring U.S. military intervention against the DPRK.

For all of the talk of North Korea threatening “the world,” Pyongyang has never shown much interest in “the world.” The Kims have spent little time threatening to incinerate Russia, Europe, Africa, South America, Canada, the Middle East or South Asia. The North always has focused on South Korea, Japan and the superpower looming behind them, America.

The Kims’ ever-truculent rhetoric reflects weakness, not strength. They always wanted their virgins in this world, not the next; none of them would intentionally launch a suicidal attack for the fun of it. The DPRK wants to avoid—not wage—war with America.

If the United States was not “over there,” the North’s safest course would be to ignore Washington. Creating weapons capable of targeting America would inevitably gain U.S. attention, creating the sort of hysteria that today seems to have swept Washington and beyond. For instance, Hawaii is discussing civil-defense measures against a possible North Korean nuclear attack. But with America already involved and threatening war, Pyongyang’s only sure defense is deterrence, which means holding at least a few U.S. cities hostage.

Naturally, the denizens of Washington cannot imagine a world in which they do not dominate and in which they cannot act with impunity. But the North is moving to do what no other potential adversary other than China and Russia has done, foreclose U.S. military action. Once the Kim regime has a reasonable chance of turning at least a couple of major American cities into “lakes of fire,” would the United States maintain its so-called nuclear umbrella, risking Los Angeles for Seoul? Should conventional war break out, would the United States dare to march north as victory beckoned to oust Kim and company? Would Washington even risk intervening in a conventional conflict, since the overmatched DPRK would feel pressure to use or lose its limited nuclear capabilities?

Coats is worried about the looming existential threat from the North, but it is best understood as a response to Washington’s casual and constant threat to bomb Pyongyang whenever the United States sees fit. The Kim regime may be hostile, but it doesn’t want war. Rather, it wants to ensure that America does not start a conflict with the DPRK.

The best response would be for Washington to back away from a war it need not fight. South Korea long has had the resources necessary for its own conventional defense. While its advantages are not quite as great as America’s—merely 40–1 on economics and 2–1 on population—the Republic of Korea’s failure to protect itself demonstrates how the Pentagon today has become an agency of international welfare.

And with rising interest in the South about building an independent nuclear capability, Washington should consider the advantages of folding up its nuclear umbrella as well, so the city at risk in defending Seoul is, well, Seoul, rather than Los Angeles or any other American metropolis. Nonproliferation has value, but the safety of America’s homeland is more important.

Does North Korea threaten America? Only because the United States has been next door for nearly seven decades, preparing for war against the North. U.S. policy in Northeast Asia should change to protect America above all.

Doug Bandow is a Senior Fellow at the Cato Institute and a former Special Assistant to President Ronald Reagan. He is the author of Tripwire: Korea and U.S. Foreign Policy in a Changed World and coauthor of The Korean Conundrum: America’s Troubled Relations with North and South Korea.