The Real Terrorism Problem: There is No Such Thing as Perfect Security 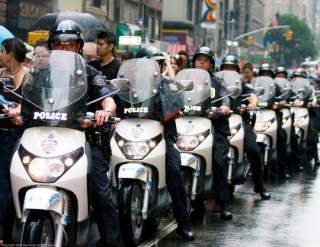 In a span of a few hours, the United States experienced a series of lone-wolf terrorist attacks from individuals who law enforcement authorities believe don’t have direct operational connections with international terrorist organizations. On the streets of New York, the pressure cooker explosion in the densely packed Chelsea neighborhood on a Saturday night was taken in stride; New Yorkers, after all, have witnessed acts of terrorism before, and the NYPD is on constant alert knowing full well that the city is always a top operational target for terrorists. People went about their night as usual; most of the people I ran into on the street were more concerned about their dinner plans that night than any follow on explosions.

The national media, however, has been another story entirely.  CNN, MSNBC, and Fox News covered the New York and New Jersey bombings and Minnesota knife attacks as if the country was in the middle of a siege, powerless to a few deranged individuals.  This is not to say that the incidents last weekend weren’t serious; they were.  Twenty-nine people were sent to the hospital in New York, and the fact that Ahmad Khan Rahami was flagged by the FBI on two separate occasions but was unable to open up a full investigation meant that he was straddling the line between self-radicalized jihadist and criminal misfit.

But if CNN and the networks were off-kilter in their coverage, the editorialists of the Wall Street Journal are even worse. In an editorial published on Wednesday, September 21, the paper calls for bulked-up surveillance power for federal and local police departments and dramatic changes to how the U.S. government treats suspects arrested for terrorism-related offenses.

There is always a high degree of Monday morning quarterbacking after a terrorist incident.  From the near-miss Christmas day airplane bombing in 2009 to the Boston Marathon bombing in 2013, commentators, politicians of both political parties, and ex law enforcement agents that sign contracts to be television panelists all too often blame the intelligence and law enforcement community for missing important signals that may have preventive the attack from occurring.  In some cases, this is a perfectly reasonable sentiment to express; Washington’s homeland security infrastructure failed miserably when they failed to pick up signs of Umar Farouk Abdulmutallab’s danger to society, particularly given the fact that he was on a federal terrorism database and that his own father reported his son’s radicalization to the U.S. Embassy.

Yet there is also a tendency to overreact and add more stringent intelligence gathering as a default response, hoping that doing so will provide law enforcement with the magic power of picking up, interrogating, charging, and prosecuting every single terrorist suspect or extremist that resides in the United States.

The Journal fits this pattern.  “[T]he Rahami case raises troubling questions about whether U.S. law enforcement and intelligence are gathering, analyzing and acting on the information they need to detect and disrupt threats before they happen,” the paper writes.  “He [Ahmad Khan Rahami] ordered his IED components online.  Missing these red flags was especially notable given New York City’s antiterror focus since 9/11.”

The paper’s solution to this incompetence?  More surveillance of course.  Suspects arrested by police should be branded enemy combatants and treated as such (whether this includes naturalized Americans is a mystery, although from the tone of the editorial, the WSJ seems to willing to go in that direction).  Lawmakers also need to get back to work and amend the USA Freedom Act, which the Journal describes as a hinderance on the counterterrorism community in pursuit of some novel and idealistic world where civil liberties are a fundamental value of American society (imagine that!).  "The debate now should be about expanding interrogation and surveillance,” the WSJ bluntly declares.

Advocating for enhanced surveillance and arresting powers is one thing, but casually dismissing — let alone failing to mention — the powers that law enforcement already possesses is another. This is the prime offense that the WSJ commits, and it does a disservice to the wider debate on counterterrorism in this country.  Personal privacy and civil liberties are treated as obstacles and inconveniences rather than critical components of America’s way of life.

Here are the facts. The USA Freedom Act is not the national security threat that its opponents proclaim it is. The only major differences between the Freedom Act and the Patriot Act are that the former requires additional transparency measures and more accountability into the FISA Court process; a greater role for judges before telephone metadata can be handed over to the NSA; and changing the FISA Court into a more adversarial system if the judges believe it would benefit their deliberations.  And in cases of a public emergency, the intelligence community is still permitted to attain the information it needs without a court order as long as it applies for an order later on.

The paper’s call for declaring terrorism suspects on U.S. soil enemy combatants is equally misguided and glosses over the fact that the FBI is already allowed to question a suspect for intelligence information before issuing the Miranda warning.  It’s called the public safety exception, and it’s been effectively used on the underwear bomber, the Boston marathon bomber, and reportedly on Ahmad Khan Rahami as well.  Because there is no definitive time limit on the public safety exception, interrogators have discretion as to when to end the procedure.  Law enforcement is even allowed to use evidence during this period in court.  And, in case the Wall Street Journal has forgotten, the criminal justice system has proven remarkably effective in prosecuting terrorists for decades; the paper fails to argue why treating a person as an enemy combatant would be any more effective in keeping the country safe.

There will inevitably be more calls for beefing up America’s counterterrorism capabilities, including changing the way law enforcement does business in order to ensure that something like last weekend’s attack in Chelsea doesn’t happen again. Some in Congress will no doubt attempt to resurrect the surveillance debate in the hopes of amending provisions in the USA Freedom Act that they view as dangerous to national security and an obstacle to effective counterterrorism work. But here is the sad but true fact: there is no such thing as perfect security, especially when individuals can simply radicalize themselves online and carry out a brazen attack on a soft-target without communicating with a terrorist group or member overseas. And we shouldn’t forget the powers that our cops and spies already possess.