The Rubio-Led Assault on Rose Gottemoeller 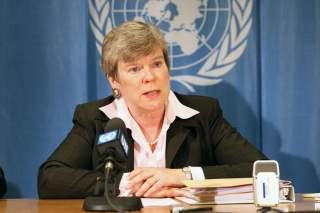 The nomination of Deputy Secretary General to NATO doesn’t usually make waves. The post doesn't receive the acclaim or attention of the Supreme Allied Commander in Europe or the NATO Secretary-General. Indeed, the deputy resembles a cog in the machinery of the NATO bureaucracy; if the Secretary General is unavailable, the deputy will pick up the slack and do some interviews with the press or issue a couple of statements on behalf of the organization.

That all changed when President Obama announced last March that he picked Rose Gottemoeller to be NATO's Deputy Secretary General. Gottemoeller has had an extensive career with everything and anything related to the Russia file, including a stint as the head of the Carnegie Endowment's Moscow field office. She served in multiple roles during the Bill Clinton administration, including director of Russia, Ukraine, and Eurasian affairs at the National Security Council, Assistant Secretary for Nonproliferation and National Security at the State Department, and Deputy Undersecretary of Energy for Defense Nuclear Nonproliferation. She returned to public service when President Obama selected her to lead a number of portfolios at the State Department dealing with Russia and arms control.

Her appointment as NATO Deputy Secretary General has generated such angst and opposition from high-profile members of the Republican caucus, however, that the State Department has been forced to come to her defense on several occasions.

To her colleagues, Gottemoeller is a well-experienced and professional diplomat with a tremendous knowledge of U.S.-Russia relations and whose expertise has been valued by two administrations over the past two decades. But to Republicans like Sens. Marco Rubio, James Risch, and John Cornyn, she has problems telling Congress the truth on some of the most important arms control agreements in the world. All three senators have had problems with Gottemoeller in the past regarding her willingness to provide Congress with up-to-date information about whether Russian officials were complying with arms agreements that they signed up to. Their attempt to block Gottemoeller in 2014 for the position she currently holds was only defeated after then-Senate Majority Leader Harry Reid overruled their objections and took her nomination to the floor.

Two years later, Rubio & Company (this time with freshman Sen. Tom Cotton joining the team) are back with the very same arguments. Gottemoeller, they argue, is deceitful. She says one thing to senators in private briefings and something else entirely in public testimony. Calling someone a liar is about the worst thing you can say in Washington about a US diplomat who prides herself on her work. If you describe someone as two-faced, it has more of an impact if you have actual evidence to back it up. Rubio, Risch and Cornyn don’t. An administration official saying one thing behind closed doors and something else in public testimony is not only common in Washington, but also expected when classified information is involved. Her detractors are trying to prove a negative, one that the State Department says was simply a misunderstanding that was later clarified to Congress.

This is why the opposition led by Rubio & Co. likely doesn’t have much to do with her interactions with Congress, but rather to her record as one of the lead implementers of Obama’s reset policy toward Russia. Rubio and others say that she is far too soft on Vladimir Putin's compliance with arms control deals that she herself helped negotiate. "Our main concern with Secretary Gottemoeller’s appointment," they write, "is an apparent unwillingness to keep the North Atlantic Council and individual member states apprised of key updates on Russian arms control violations...her frequent public ‘misstatements’ on this topic, and her reputation as a ‘Russia apologist."

And therein lies the underlying reason why Rubio and twelve of his House colleagues oppose Gottemoeller for the Deputy Secretary post. Their objections are probably not based on her past statements to members of Congress or her less-than-consistent testimony in front of several congressional committees. Rather, they are an extension of their visceral opposition to the New START Treaty - one of the most comprehensive arms control accords between the U.S. and Russia since the end of the Cold War. As the State Department's principal diplomat during those negotiations, Gottemoeller represents everything that congressional Republicans revile about the Obama administration's former "reset" policy with the Russians: compromise with a country that is still very much maligned in Washington as a resurgent, belligerent power hoping to upend the post-Cold War order in Europe.

Debate over the New START Treaty was one of those moments in U.S. history when an issue is so immense that it splits a political party that is usually in lockstep. Thirteen Republicans decided to ratify the accord, calculating that reducing America's nuclear weapons stockpile was a worthy price to pay for capping Russia's strategic nuclear arsenal. Two-thirds of the Republican caucus didn't feel the same way; instead, they lambasted a treaty that they saw as far too generous to the Russians and far too detrimental to the size and capability of America's stockpile of nuclear warheads.

Nearly six years after New START was passed by the Senate, Republicans in the chamber are even more insistent that Gottemoeller's stewardship of the "reset" was a terrible mistake for U.S. security interests. It's hard not to see objections over Gottemoeller's nomination as anything other than another GOP attempt to further complicate the already slim possibility of a U.S.-Russia defrost during the rest of Obama's tenure.

Republicans continue to argue that any conciliation with the Russians will eventually boomerang. The view is so prevalent among both parties in Washington that any contact with Russia, however minor or remote, is presented as an awful mistake that makes the U.S. look disheveled and weak. Accommodation and negotiation with Moscow, so the argument goes, has no place in U.S. foreign policy at a time when Russian forces are still in Eastern Ukraine, Russian aircraft are bombing civilian areas in Syria without regard to international humanitarian law, and Crimea is now effectively a Russian territory.

Yet what these same Republicans don't appear to understand is that talking with the Russians has actually served U.S. national security interests on numerous occasions, from the multiple nuclear disarmament and reduction agreements over the past three decades to a productive partnership in a multilateral forum that enabled the world to keep Iran away from nuclear-threshold status.

Instead of fighting old battles, the GOP should explain to the American people why America would be better served blocking Gottemoeller's nomination and diluting American leverage in NATO's civilian leadership as a result. Admitting that it would be foolish to not engage with the Russians on any matter might be a good place to start.