The Simple Reason Russia and America Keep Inching towards Crisis 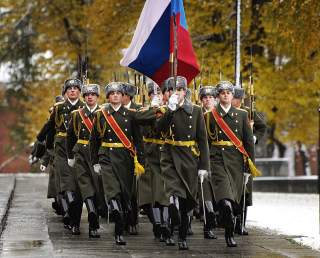 Tensions between the United States and Russia rose rapidly during the final months of the Obama administration. Symbolizing that trend is the new deployment of three thousand U.S. troops along with tanks and other military hardware in eastern Poland, directly on that country’s border with Russia. That decision drew an angry rebuke from Moscow.

Long gone was the hope Obama expressed early in his presidency for a “reset” of relations with Russia. Equally obsolete was the president’s ridicule of GOP nominee Mitt Romney for stating that Russia was America’s principal adversary. “The 1980s are now calling to ask for their foreign policy back,” Obama mocked his opponent in a presidential debate.

Since then, bilateral relations have deteriorated rapidly. The United States led the charge to impose economic sanctions on Russia in response to Moscow’s annexation of Crimea and support for rebel forces in eastern Ukraine. In its waning weeks in office, the Obama administration imposed a new round of sanctions for Russia’s alleged cyber hacking of the Democratic National Committee and other supposed interference in the 2016 U.S. elections. Vice President Joe Biden epitomized Washington’s hard-line attitude when he branded Russia as the most serious threat to the global order.

The reality, though, is that underlying tensions in the bilateral relationship have been ascendant for the past two decades. Despite occasional conciliatory rhetoric, U.S. actions during the initial post–Cold War decade suggested a lack of trust toward Russia—even during Boris Yeltsin’s presidency, to say nothing of the mounting suspicions once Vladimir Putin succeeded Yeltsin. The first round of NATO expansion took place in 1998, while Yeltsin was president, and long before U.S. officials could point to Putin’s aggressive moves as justification for adopting anti-Russian policies.

Russia and the United States have fundamentally different perspectives about the policies each country has adopted. From Washington’s perspective, Russia under Putin has become a thinly disguised dictatorship with expansionist ambitions. Although U.S. officials deem Moscow’s actions regarding Crimea and eastern Ukraine since 2014 as the most serious offenses, there are others. For example, the Bush administration was angry when Russian troops intervened in the Republic of Georgia to prevent that country’s government from suppressing secessionist movements in Abkhazia and South Ossetia. And more recently, the Obama administration seethed when Russian forces entered Syria on behalf of Bashar al-Assad’s beleaguered regime.

Russia’s list of grievances is even longer. They began with the U.S.-led NATO interventions in Bosnia and Kosovo. The Balkans were an important region to Russia as far back as the nineteenth century. A U.S. intervention there appeared to Russians as a gratuitous slap in the face—an ostentatious display of the West’s victory in the Cold War and a move that emphasized Russia’s weakness. The various rounds of NATO expansion produced further irritation. Moscow considered the first round, which brought Poland, the Czech Republic and Hungary into the alliance, as provocative enough. But the subsequent rounds added the Baltic republics, which had been part of the Soviet Union itself, and other nations that Moscow considered rightfully part of Russia’s security sphere. And then, enthusiastic American proponents of NATO expansion spoke of inviting Georgia and Ukraine to join. Russia’s 2008 military incursion in Georgia appeared to be a warning from the Kremlin that it would no longer tolerate NATO’s growing presence on Russia’s border. Further U.S. and EU meddling in Ukraine’s internal political affairs in 2014 produced even greater anger in Moscow, and led to the annexation of Crimea.

Policies regarding all of those issues reflect starkly conflicting perspectives between the United States and Russia. American officials consider the Balkan interventions a noble effort to prevent massive bloodshed in two civil wars. Those officials regard NATO expansion as an equally noble effort to enlarge the democratic community and secure a peaceful Europe. Conversely, they view Russia’s military responses in Georgia and Ukraine as manifestations of a nasty expansionist agenda that, if not resisted, might someday lead to a dangerous threat even to central and western Europe. Thus, U.S. policymakers see the new U.S./NATO military deployments in Poland and the Baltic republics as a defensive move against potential Russian aggression.

Russia considers its military maneuvers and other actions to be a defensive response following years of U.S. provocations, highlighted by Washington’s policies regarding the Balkans and NATO expansion. Subsequent U.S. military deployments in eastern Europe are deemed an even worse provocation. Putin’s government regards such moves as unacceptable intrusions in Russia’s rightful sphere of influence as a great power. U.S. leaders, on the other hand, reject the very concept of spheres of influence. Biden is only the latest prominent American to emphasize that point, charging that Russia aims to return to a system in which international politics is “defined by spheres of influence.”

Although both countries bear responsibility for the breakdown in relations, Washington deserves more blame than Moscow. Rejecting any manifestation of spheres of influence is either naïve or supremely arrogant. Russia is hardly the only country to regard the concept as important for its security. Or do U.S. officials believe that Chinese actions in the South China Sea, Turkey’s policies toward Iraq and Syria, and Saudi Arabia’s actions in Bahrain and Yemen do not involve such a consideration?

The incoming Trump administration has an important opportunity to repair relations with Russia. Trump himself has expressed the desire to reduce tensions and pursue greater cooperation with Moscow. He has reiterated those views despite scurrilous allegations, by opponents hell-bent on triggering a new Cold War, that he is a Putin stooge or even a Russian “Manchurian candidate.” One hopes that he succeeds in dampening tensions. The alternative is an increasingly dangerous confrontation with a Russia that possesses thousands of nuclear weapons.