Is the Trump Administration Sabotaging the Planned Summit with Kim Jong Un? 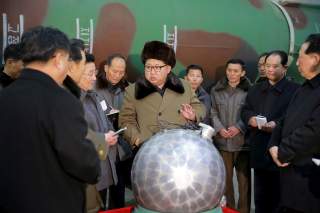 President Donald Trump is set to meet North Korea’s Supreme Leader Kim Jong-un. The summit looks more serious after the latter’s surprise visit to China. It was Kim’s first meeting with Chinese president Xi Jinping. That would not have happened if Kim and especially Xi were not taking the prospect of negotiations with America seriously.

However, is the Trump administration equally serious? The president’s recent appointments suggest not. Or they suggest that he is not aware of what might be necessary to reach a denuclearization agreement with the Democratic People’s Republic of Korea.

The Kim dynasty has caused extraordinary suffering for the North Korean people. But that doesn’t mean it is irrational or suicidal. To the contrary, three generations of Kims have played a weak hand well. And so far they have preserved their nation’s unique “social system,” as they call it.

The summit is no concession by Kim Jong-un. To the contrary, the DPRK long has insisted on bilateral negotiations with the United States. If the summit occurs, Kim will receive what his father and grandfather both wanted but never received: to be treated as an equal by the United States.

Is Kim prepared to give up a nuclear arsenal acquired at such great effort and cost? Probably not. He certainly won’t do so for nothing. According to the South Koreans with whom Kim talked, in return Pyongyang expects security guarantees. Whatever the details, that would mean preserving the dynasty and precluding any U.S. attempt at regime change. The end of the U.S.-South Korean alliance and withdrawal of American troops could be conditions. Perhaps more.

In short, the North is unlikely to abandon nuclear weapons unless it believes that the regime would survive the aftermath. At least some advocates of war believe that simple intimidation will work. Fear of a massive attack will convince Kim to surrender, trusting his future to President Trump’s professed beneficence and goodwill.

That is plausible, but only if Pyongyang really imagines itself to be safer abandoning nuclear weapons. That would require believing Washington will not attempt regime change. Unfortunately, successive U.S. administrations have inadvertently created strong disincentives to nonproliferation.

Every U.S. president since Ronald Reagan has ousted at least one foreign government. President George W. Bush did two, along with terming the DPRK a member of the “axis of evil” and stating that he “loathed” Kim Jong-il, the current ruler’s father. President Barack Obama unsuccessfully attempted to oust Syrian president Bashar al-Assad and, more importantly, did help defenestrate Libya’s Muammar Khadafy, who had negotiated away his nuclear weapons and missile programs with President Bush.

President Trump insists on rewriting or dropping the Iranian nuclear accord, or JCPOA, agreed to just three years ago. He may walk out of the agreement in May, the next deadline for extending the promised waiver of U.S. economic sanctions. Although some administration hard-liners fantasize that doing so would impress Pyongyang with the president’s toughness, instead it almost certainly would communicate that Washington cannot be trusted to fulfill any agreement made in the future. Giving up your most powerful weapons and leaving yourself vulnerable would be particularly foolish if your opponent proves to be simultaneously hostile and untrustworthy.

Moreover, the president has added staffers determined not only to destroy prior accords but overthrow existing regimes.

Prospective Secretary of State Mike Pompeo was a fierce opponent of the JCPOA and suggested support for regime change in North Korea. For instance, he told the Aspen Security Forum that “It would be a great thing to denuclearize the peninsula, to get those weapons off of that, but the thing that is most dangerous about it is the character who holds the control over them today.” He added, “from the administration’s perspective, the most important thing we can do is separate those two.”

Despite acknowledging that Kim is “rational,” Pompeo hinted at supporting regime change. The Pentagon was working to do what “ultimately needs to be achieved.” The administration should address “every piece” of North Korea’s threat. “As for the regime, I am hopeful we will find a way to separate that regime from this system,” he opined: “Separate capacity and someone who might well have intent, and break those two apart.” Moreover, "The North Korean people I'm sure are lovely people and would love to see him go." Pompeo also joked—presumably—that Kim “should vanish, given the history of the CIA, I’m just not going to talk about it. Someone might think there was a coincidence.”

Such sentiments are not likely to encourage Pyongyang to make a deal.

John Bolton’s views are even more threatening. He backed the Iraq War and justifies that position even today. In February 2003 he told Israeli officials that the administration planned to move on to Iran and Syria, ousting those nations’ rulers as well. (Apparently the Iraq debacle dissuaded President George W. Bush from following this plan.)

Bolton concocted a strategy for leaving the JCPOA, irrespective of Iran’s compliance. Moreover, he advocated preventive war against Iran, which did not possess nuclear weapons. Indeed, U.S. intelligence said Tehran had abandoned its nuclear program. Nevertheless, Bolton wrote an article entitled “To Stop Iran’s Bomb, Bomb Iran.” He was not troubled by the absence of “palpable proof,” since “Iran’s steady progress toward nuclear weapons has long been evident,” at least to him, if not to U.S. intelligence. Since “the inescapable conclusion is that Iran will not negotiate away its nuclear program,” military strikes were necessary. Bolton also explicitly advocated regime change before an audience of the People’s Mujahedin of Iran, which is a cultish authoritarian organization long labeled as terrorist by the State Department.

More recently he advocated that the United States offer/impose a Libya-style deal on the North. The summit talks should “be similar to discussions we had with Libya thirteen or fourteen years ago: how to pack up their nuclear weapons program and take it to Oak Ridge, Tennessee.” He ignored how that arrangement worked for the man making the deal, Muammar el-Qaddafi. Washington spurred his ouster when a convenient arose, and he ended up being dragged through the streets, sodomized, and killed.

Even more striking is the fact that Bolton advocated Qaddafi’s death, if not in quite such gruesome fashion. In 2011 he advocated that the U.S. military launch strikes on Qaddafi personally: “I think he’s a legitimate target.” Bolton did not simply advocate action that conceivably could lead to Qaddafi’s ouster and death, such as backing rebel forces. Bolton urged direct American bombing to kill Qaddafi. As for the denuclearization pact with the latter, Bolton believed “it was the right thing to do.” After all, “nobody at the time thought it was a get-out-of-jail-free card in perpetuity.” Had Qaddafi known that, he probably would not have approved the accord. And if Kim believes this to be current U.S. policy, he is unlikely to sign.

Finally, Bolton advocated war against the North. In February he wrote an article entitled “The Legal Case for Striking North Korea First.” In his view, “It is perfectly legitimate for the United States to respond to the current ‘necessity’ posed by North Korea’s nuclear weapons by striking first.” While it would be nice to get agreement from South Korea and Japan, “no foreign government, even a close ally, can veto an action to protect Americans from Kim Jong-un’s nuclear weapons,” even if that attack could result in a devastating war involving that allied state.

As for the upcoming summit, said Bolton, “I think this session between the two leaders could well be a fairly brief session where Trump says, ‘Tell me you have begun total denuclearization, because we’re not going to have protracted negotiations, you can tell me right now or we’ll start thinking of something else.’”

In return Bolton appears to be willing to offer, well, nothing, other than not bombing Pyongyang tomorrow. In an interview with Radio Free Asia he declared: “I don’t think we should offer them economic aid. . . . There’s no way we should give North Korea a peace treaty. They’re lucky to have a meeting with the president of the United States. I think if they want economic progress for the people of North Korea, they should end the charade of a divided peninsula. They should ask for reunification with South Korea.”

Now there is an incentive for Kim to give up his nuclear weapons!

Is the president committed to a peaceful settlement and does he have realistic expectations as to what the summit is likely to deliver? Much depends on the answer to these questions. A deliverable North Korean nuclear weapon would be bad. A war on the peninsula would be worse. Unfortunately, the president’s positions and actions suggest that he and his new appointees view war not as a tragic necessity, but an unexceptional, even routine policy option. If these factors determine future administration policy, the American people will be the losers.