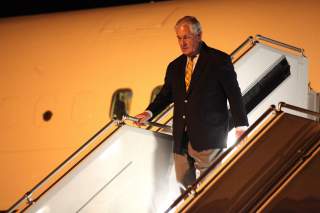 Last year’s coup attempt was Turkey’s Reichstag fire, giving Erdogan an excuse to punish all of his opponents, even those who resisted the attempted military takeover. The state of emergency, noted State, “allowed suspension of some due process protections for those accused of ties to terrorist groups”—which turned out to be almost anyone who had criticized Erdogan and his abusive behavior. Moreover, “The government restricted freedom of expression, media, and the internet, intensifying pressure on the media following the failed coup attempt.”

That was merely the start:

Courts imprisoned tens of thousands of persons accused of supporting the coup or terrorist groups, in many cases with little clarity on the charges and evidence against them. Government decrees issued under the state of emergency restricted suspects’ access to legal assistance, allowed suspects to be held without charge for up to a month, and in some cases froze the assets of suspended or fired civil servants or their family members.

Moreover, “The government suspended and dismissed tens of thousands of civil servants, who generally had little access to legal recourse or appeal, and closed thousands of businesses, schools, and associations.”

As legal repression, political instability and military conflict have expanded, the economy has slowed. Turkey has become an even less reliable partner for the United States.

Washington, obviously, can do little to fix any of these nations. However, the persistent and sometimes pervasive abuse of human rights detailed by the State Department’s annual report has security consequences. Rather than ignore the issue, the Trump administration should take the side of liberty and democracy. While America cannot remake the world, it could at least affirm the principle that governments should protect their people’s lives and dignity. If Washington succeeded in pushing the needle even a little on human rights, the world ultimately would be safer for Americans.

Doug Bandow is a Senior Fellow at the Cato Institute. A former Special Assistant to President Ronald Reagan, he is the author of several books, including Foreign Follies: America’s New Global Empire (Xulon Press).