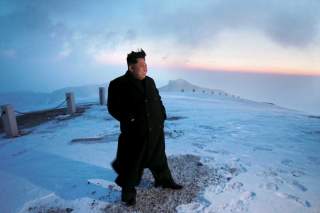 The last week has been yet another head-spinner in the Trump administration’s interaction with North Korea. Six months ago President Donald Trump threatened to “totally destroy North Korea.” Then suddenly he agreed to a summit with North Korean leader Kim Jong-un just forty-five minutes after the idea was first pitched to him by South Korean envoys. Everyone has whiplash, which is almost never good for policy.

The Korea analyst community has prevaricated over this all week on cable news and social media, as it seems far too fast and too unlikely. My own sense is broadly the same: this is moving so quickly, that the possibility of the summit stalemating or falling into an acrimonious back-and-forth between Trump and Kim is much higher than normal. Traditionally, summits occur at the end of years of diplomacy and staff work in which the devils in the details have been hammered out. The heads of state show up at the conclusion to nail down a few particulars, lend their prestige to the proceedings, and finalize the deal.

By contrast, Trump is suggesting to meet Kim in just nine weeks. That is simply not enough time, especially if a grand bargain on peninsular affairs is really in cards. Previous efforts on North Korea’s nuclear weapons—the Agreed Framework and the Six Party Talks—took years of effort and still fell through. If the summit really does happen by the end of May, the two sides will simply not have had enough time to close much of the enormous strategic and ideological divide between the United States and North Korea. That will leave much that Trump himself must do, personally, in the room with Kim. To put it gently, it is huge question whether Trump is really up to this.

Trump defenders are already suggesting he has the chops for this, because he is a great negotiator practicing the “art of the deal.” But we need to be more candid here; the stakes are far too high to indulge Trump’s reality TV persona. Much in Trump’s character suggests he is not, in fact, ready for this. He does not read, including the presidential daily brief, if rumor is true. He almost certainly knows very little about Korea. Some reports suggest he watches an enormous amounts of television. His grip on policy details, again according to various reports, is notoriously thin and error-prone. He lies regularly. He is moody, erratic, unpredictable and impulsive. He dislikes professional and technical staff, and he has an obvious preference for amateur friends and family. He is absorbed with his vendettas, feuds, scandals and so on. Some claim his attention span is short, and he is prone to wander wildly off-script. He is given to rage, profanity and insult when challenged.

Kim, by contrast, will almost certainly be a tough customer. No one could survive the brutal backrooms of Pyongyang politics without being a skilled bureaucratic knife-fighter. Kim overcame his inauspicious beginnings to the surprise of many who suspected a young man with no time in the party or army would not last. He has culled the army brass, assassinated his brother-in-law, rapidly finished the North’s nuclear and missile programs, and gotten the moribund economy growing again—all while sanctions have piled up. Trump has never dealt with anyone or thing like this, and his usual negotiating tactics of bluster, threats, lawsuits, insults and so on will not work. If this is to succeed, Trump will really have to buckle down and prepare. That is, to be generous, highly unlikely.

As a result, there is a not insignificant possibility that Trump will be outplayed by someone who knows the issues far better than he, or that the event will descend into a shouting match as two characters unaccustomed to being challenged tear into each other, as they did last year in the media (“rocket man” vs the “dotard”). If I had to guess, this outcome is unlikely, but it is still far more likely than in a normal summit preceded by proper staff work involving a president intellectually committed to the process. Most likely, the summit will be a bust, in which the genuinely deep issues between the two sides go unresolved given just nine weeks to resolve them. A face-saving communique could be released in which each side gives up something small, but no grand bargain would emerge.

But even that is a victory for the North, because a meeting of its leader and the U.S. president on equal terms is a huge propaganda coup, something the North has sought for decades. Trump has already given this carrot of U.S. prestige away for nothing, which shows just how woefully unprepared he is for the summit. North Korea doves keep saying that the United States should give the talks a chance, but consider how unlike any other summit this is like so far, and it was only announced about a week ago.

No consultation with relevant stakeholders was done. Trump just decided to do this at the drop of a hat. Even his staff did not know. South Korean conservatives will be apoplectic if Trump trades away U.S. forces in Korea for a weak-tea denuclearization deal the North might renege on. U.S. hawks in Congress and the DC think-tank community would fight back too. Trump is hugely unpopular in South Korea; if a deal is influenced by Trump’s reckless insouciance, desire to put tariffs on South Korea, or to provoke Seoul to pay the United States more in the special measures agreement this year—and looks like it threatens South Korean security—then it could well provoke an existential crisis in the alliance.

Trump lacks the staff for this. Not only does Trump only have nine weeks to put this all together, he is woefully understaffed. Astonishingly, he fired Secretary of State Rex Tillerson just after he agreed to the momentous meeting. The national security advisor and chief of staff may lose their jobs too. The State Department has been decimated by Trump and Tillerson. There is no U.S. ambassador to South Korea, no assistant secretary of state for East Asian and Pacific Affairs, no point person on Korea in the White House or State Department. So few Korean experts are at the State Department that Secretary Tillerson mispronounced Kim Jong-un’s name—“Kim Yong Oon”—for fourteen months without being corrected. When the South Korean foreign minister came to Washington this week, she met Ivanka Trump regarding North Korea. This is almost surreal.

The North Koreans have still not accepted the offer, nor even said that an offer was made. It increasingly looks like the South Korean officials who met Trump overhyped Kim’s words to them. Again, it is moving much too fast.

Trump decided to accept this momentous summit offer after just forty-five minutes with no staff consultation. This is classic, impulsive Trump, and it is a recipe for disaster in a tough negotiating environment. It displays his obvious disdain for expertise. Indeed, accepting this offer and pushing through his tariffs look more like Trump declaring independence from his establishmentarian staff rather than any real concern for these policy areas.

It seems that no one can say with any measure of confidence that Trump is not doing this for all the wrong reasons, which in turn could encourage him to make bad decisions at the meetings. Trump is under investigation, bedeviled by scandal, likely faces an impeachment investigation if the Democrats do well in this fall’s midterm election, and loves TV coverage and attention. A grand-bargain deal with North Korea to be marketed as a “win” at home might change the subject from Stormy Daniels and all the rest. To get to that, who knows what he might put on the table?

In brief, the Trump-Kim summit should be delayed until the U.S. side has done a lot more work, or cancelled, because a positive outcome for the United States is quite unlikely. If it goes badly, and if Trump concludes diplomacy has failed—and hawks around him like Mike Pompeo and John Bolton concur—then it could set the United States on the road to war. If it stalemates (the mostly likely outcome), then it is still a propaganda win for the North because of the optics of Trump meeting Kim as an equal. The only way the summit benefits the United States is if Trump pulls off a grand bargain. Little in Trump’s character, staffing troubles, or the highly compacted nine-week timeframe suggests this is a likely outcome. It is all just too risky. The best move is just to cancel the summit.