The Trump Team Is Still Searching for a Two-State Solution 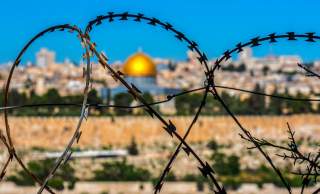 Washington, DC is dealing with a lot of problems these days. Drama over the House Intelligence Committee’s investigation into possible collusion between Trump campaign officials and Russian operatives is pretty much all that people seem to care about these days. Talks over keeping the government open after April 28 are proceeding apace. And the aftermath of the Obamacare repeal is still hovering above the capital city like a dark storm cloud. Outside of the first U.S. missile strikes on the Assad regime since the Syrian civil war began, it's almost as if everything else in the world is unimportant.

And yet there are things going on in the world today that are even more consequential to America’s national security than how much money Paul Manafort may have made in Ukraine or whether the federal government runs out of money by the end of next month. The Israeli-Palestinian peace process, to name one major issue.

Trump’s envoy for international negotiations, Jason Greenblatt, has been flying in and out of the Middle East like so many peace negotiators before him. Greenblatt perhaps has the most thankless job in the foreign-policy community: trying to find just the right combination of honey and vinegar to convince Palestinian Authority president Mahmoud Abbas to come back to the table. The fact that he needs to do this at the same time as he must reassure Israeli prime minister Benjamin Netanyahu that Washington has Israel’s core interests in mind is the proverbial circling of the square. As former State Department negotiator Aaron David Miller has written for CNN, “The chances of the Trump administration waking the patient up, let alone facilitating a real road to recovery, are well . . . pretty close to zero.” This is coming from a man who spent most of his career trying to strike the ultimate bargain in the Holy Land, so he knows something about getting two intransigent parties in the same room.

It’s not going to be easy for Jason Greenblatt.

But for those who continue believe that the two-state solution is ultimately the only formula that will provide Israelis and Palestinians with the right mix of self-determination, security and peace, Greenblatt’s meetings with Israeli and Palestinian diplomats over the last two weeks are an encouraging sign that the Trump administration seems serious about putting out feelers.

The only thing predictable about Mideast peace negotiations is that Netanyahu and Abbas don’t particularly like or trust one another. Rightly or wrongly, Abbas sees Netanyahu as a right-wing extremist who views placating his domestic political base as more important to his personal legacy than risking his political future by providing the Palestinians with the concessions they seek. Netanyahu, in turn, sees in Abbas a weak politician who is past his prime, doesn’t have the power to get the Palestinian people behind him, and a figure who can’t guarantee that a Palestinian state wouldn’t deteriorate into another Gaza Strip. Rushing into talks, even if the Palestinians agreed to talks, is bound to fail and set back the peace process even further.

Greenblatt has chosen to take a more deliberative approach. He’s made the rounds in Israel, Ramallah, Washington and on the sidelines of the Arab League Summit this week, poking and prodding about what the stakeholders would like to see in any deal and whether there’s enough common ground that a more formal process can be launched. That’s the way to do it.

Again, we haven’t a clue as to whether the Trump administration will be anymore successful than the Clinton, Bush or Obama administrations before it. Mideast peace talks tend to have the effect of causing migraines, heart palpitations, ulcers and a general sense of psychologic daze (just as President Bill Clinton and former Secretary of State John Kerry). Greenblatt and his superiors in the White House may get to that point as well.

But at least they are starting this painful but necessary endeavor with eyes wide open.