The U.S. Must Focus on Its Own Enemies 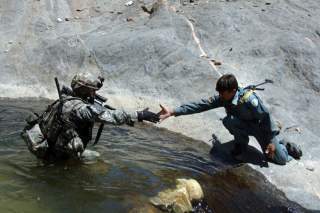 The so-called “Islamic State” is losing ground. The liberation of Mosul, Iraq’s third most populous city, may be the Baghdad government’s next objective.Yet even as the “caliphate” shrinks in the Middle East, Daesh, as the group also is known, is increasing its attacks on Western civilians.​​ (The unintended yet predictable consequence of such foreign meddling is to make America less safe.) In contrast to Al Qaeda, which always conducted terrorism, ISIS originally focused on creating a caliphate, or quasi-state. Daesh’s territorial designed conflicted with many nations in the Middle East: Iraq, Syria, Iran, Turkey, Libya, Jordan, Lebanon and the Gulf kingdoms.

The Obama administration did not intervene out of necessity: ISIS ignored America. Moreover, the movement faced enemies, which collectively had a million men under arms; several possessed sophisticated air forces. Washington’s concern for those being killed by ISIS was real, but casualties lagged well behind the number of deaths in other lands routinely ignored by the United States. The administration seemed most motivated by the sadistic murder of two Americans who had been captured by ISIS in Syria. Although barbaric, these acts did not justify another Middle Eastern war.

Washington took control of the anti-ISIS campaign, but waged a surprisingly lackluster effort. The administration recognized that there was no domestic support for ground troops, so mixed bombing and drone strikes with support for “moderate” Syrian rebels proved to be generally ineffective.

Turkey sought to play the United States, pushing Washington to oust Syria’s Bashar al-Assad, while tolerating ISIS. The Syrian government attempted to use the specter of the Islamic State to weaken Western support for its overthrow. Iraq’s Shia-dominated government wanted a bailout while maintaining sectarian rule. The Sunni Gulf countries expected America to take care of their problems, as usual.

The campaign always was ATO: America and The Others. Iraq’s government and military were in disarray. The Gulf States soon effectively dropped out. Saudi Arabia dragged Washington into a foolish military diversion, a war with Yemen’s Houthis. Iran turned out to be America’s reluctant but most effective partner.

Now ISIS is in retreat—it has lost almost half of the territory it held in Iraq and one-fifth in Syria. But the group remains surprisingly resilient for an increasingly unpopular and only modestly armed group facing a coalition including the U.S., Europe, and most of the Middle East.

Unfortunately, defeat has turned Daesh toward terrorism, including in the West. As was predictable. After the horrid attacks in Paris late last year, French President Francois Hollande declared that his nation was at war. But it had already been bombing ISIS-held territory for fourteen months. The only surprise was that it took ISIS so long to strike inside France ​so spectacularly.

Had the United States and Europe left the battle to those directly threatened, the latter would have had no choice but to take the lead. And the fight would have been largely contained within the Middle East. ISIS would have had to focus on the enemy literally at its gates, rather than its abstract Western enemies afar.

As ISIS recedes, Washington should step back. Unfortunately, the administration’s plan to increase U.S. forces by 560 to about 6,000 for the coming Mosul assault will tie America more closely to the sectarian government in Baghdad and its close partners, Iran-supported Shia militias who have committed numerous civilian atrocities.

Washington understandably prefers an unsympathetic Iraqi government to a threatening Islamic State, but should remain in the background. Baghdad should be left responsible for its own mistakes and crimes. Seeking to build up a “moderate” insurgency to battle both Damascus and ISIS has proved to be a fool’s errand. U.S.-backed forces too often surrendered both personnel and weapons to the radicals. In particular, backing Riyadh in Yemen has been a disaster. Saudi Arabia has turned the longrunning insurgency into a sectarian conflict, while Yemenis blame America for civilian atrocities committed by the Saudis.

​The problems festering in the Middle East ​are complex. There are few "good guys" to support, and Washington should stop pretending that it is capable of controlling ​ so many complex factors and dictating positive outcomes​. At the very least,  the United States certainly should stop making more enemies. America faces a genuine terrorist threat, though it is largely indigenous, inspired by foreign killers. Alas, the number of terrorists will continue to increase as Washington makes other people’s conflicts its own. Instead, the U.S. should focus on those targeting Americans.

The ISIS “caliphate” is collapsing and eventually will disappear from the Middle East. But as a terrorist group Daesh may well come to surpass Al Qaeda. The U.S. must learn to focus on its own enemies.

Doug Bandow is a Senior Fellow at the Cato Institute. A Foreign Policy Fellow and Scholar with Defense Priorities, he also is a former Special Assistant to President Ronald Reagan and author of Foreign Follies: America’s New Global Empire.