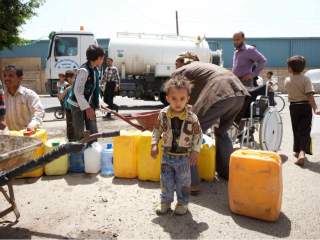 The Middle East is often categorized as a cauldron of blood-soaked anarchy—an area of the world where those who rule care more about their family’s fortunes than the prosperity of their subjects and a region where political disagreements are resolved by bullets and vendettas rather than votes at the ballot box. President Barack Obama may not want to admit it openly (although he came close during his exhaustive interview with Jeffrey Goldberg of The Atlantic), but it’s likely that whenever he sees the Middle Eastern region on a map, he recoils. And for good reason: with the exception of his plunge into Libya in March 2011, President Obama has to the best of his ability attempted to transition the United States from a nation quick on the trigger to one that picks and chooses which civil war to engage in and which problem requires some amount of U.S. military force.

The barbarity and cruelty of Bashar al-Assad and the criminal nihilism of the Islamic State of Iraq and the Levant tend to get most of the bandwidth and airtime here in the United States. There are several publications that try to shed a light on other conflicts in the region that are just as threatening to U.S. national-security interests, or simply don’t get enough (or any attention) in the bubble that is Washington, D.C.

The civil war in Yemen, which has been going on for the last thirteen months, has largely escaped the level of concern that the Obama administration, the U.N. Security Council, and America's allies in Europe have devoted towards other crises in the Middle East. At the same time that Secretary of State John Kerry, Russian Foreign Minister Sergei Lavrov, and U.N. envoy Staffan de Mistura are working valiantly to sustain a credible comprehensive peace process in Syria, millions of Yemenis continue to be subjected to the twin horrors of an indiscriminate Saudi-led air campaign on the one hand and a predatory Houthi movement on the other.

While a third round of Yemeni-Yemeni peace talks has finally gotten off the ground this week—four months after the latest negotiations collapsed—the Yemeni conflict has received a pathetic amount of coverage from the mainstream media (if you want a break from this dereliction of duty, take a look at Matt Purple’s piece in the National Interest, my own from several weeks back, Namir Shabibi and Jack Watling’s investigation for Vice News, and Daniel Larison’s consistent coverage in the American Conservative).

This is one of the reasons why I decided to write to the Committee on Arms Export Control, a special committee established by the U.K.’s House of Commons that is responsible for reviewing British arms sales around the world and ensuring that 10 Downing Street is complying with the arms-export rules that Britain is signed up to. To its credit, members of the Committee chose Yemen as its first inquiry after an eleven-month absence. As an American citizen, I would have much rather written a few letters to the Senate Foreign Relations or House Foreign Affairs Committees, but both have failed to spend a sufficient amount of time on Yemen at all outside of issues related to international terrorism (the Foreign Relations Committee held a hearing on Yemen in the context of the wider GCC last summer). In fact, in contrast to their British colleagues across the Atlantic, very few members of Congress have even broached the subject—a situation that is slowly beginning to change now that Sens. Chris Murphy and Rand Paul are joining forces to question the wisdom of providing unlimited and unconditional military and political support to Saudi Arabia.

To be honest, I have never submitted evidence to a congressional committee before, let alone a committee thousands of miles away. Indeed, just to show my ignorance about the procedures of the House of Commons, I wasn’t even certain if the rules would allow me to submit written evidence given my non-U.K. citizenship. But when I discovered that it was fair game for a Yankee like myself to send something over, I decided to do so for one reason and one reason only: in my humble opinion, one of Washington and London’s closest allies in the Arab world has been violating international humanitarian and human rights law for the past year.

Thousands of civilians have been killed and tens of thousands of additional civilians have been injured by Saudi airstrikes on civilian targets that by law are protected by the Geneva Conventions—the foundational document that governs how a war should be conducted and a treaty that requires warring parties to ensure that civilian casualties are kept to an absolute minimum (and, when civilian casualties are inevitable, the deaths are in proportion with the value of the military objective that will be achieved). Human Rights Watch, Amnesty International, the Campaign against the Arms Trade, the U.N. Commissioner of Human Rights, and the U.N. Security Council’s own Panel of Experts on Yemen have all documented examples of Saudi munitions being dropped on marketplaces, hospitals, medical clinics, mosques, homes, businesses and camps for internally displaced people. Any country that commits these kinds of infractions should be reprimanded, but when the country happens to be a long-time friend, partner, and ally of the United States, Washington has a duty to use its leverage to prevent more civilians from dying at the hands of cluster munitions or two-thousand-pound bombs supplied by the United States.

Why does the civil war in Yemen matter to the United States? For one, the Saudi campaign against the Houthis is providing a great opportunity for AQAP to expand its area of control along the southeastern Yemeni coastline—a presence that has allowed AQAP to make around $2 million a day by taxing imports and exports out of the Mukalla port. Secondly, the more air force assets that Riyadh dedicates to its Yemen campaign, the less the Saudis are able to offer to the international coalition battling the Islamic State in Iraq and Syria. And thirdly, the U.S. receives no benefit in aiding and abetting a military campaign that is killing a disproportionate number of civilians and making post-war reconstruction of an already poor country even more difficult.

The House of Commons is doing its part for the British people. It’s time for the U.S. Congress to do the same for Americans.