The West Should Avoid Starting a New Cold War with Russia 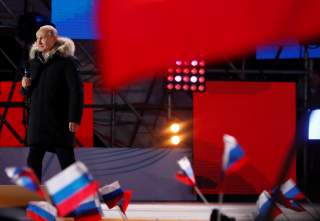 President Donald Trump entered office with praise for Russian President Vladimir Putin and support for improving Washington-Moscow relations. A year later President Trump surprised even his aides by congratulating Putin on the latter’s reelection and suggesting a summit meeting between the two leaders.

A chilling political wind is blowing through the capitals of America, Europe and Russia. There is talk of a new Cold War, as the two sides trade diplomatic expulsions. In the West, at least, there is even a hint of war as NATO fusses over European defense capabilities (poor) and the United States deploys more troops to the continent (as usual).

President Trump has stood by, mostly silently, as bilateral relations continued their slow-motion collapse, demonstrating his essential irrelevance to much of U.S. foreign policy. For instance, he allowed the State Department to announce the latest expulsion of Russian diplomats. This is one area where his gut instincts—the value of an improved relationship—are correct, but what he personally believes obviously doesn’t much matter for policy. That could change as he asserts himself with a new secretary of state and national security advisor, but they both have hawkish instincts and have demonstrated no interest in détente with Moscow.

Despite the diplomatic spiral, however, there is no new Cold War. And there won’t be a hot war unless Washington ignites a confrontation while pursuing an ever more interventionist and activist foreign policy in areas viewed as vital by Russia.

The first, perhaps most dominant ingredient of the Cold War is missing: ideological competition. America remains aggressive internationally, determined to transform the world in its image, or at least in its interest. Of course, invading Iraq, nation-building in Afghanistan, blowing up Libya and messing around in Syria all failed dramatically—even disastrously. Nevertheless, so far Washington’s governing elite appears to have learned nothing.

In contrast, Vladimir Putin clearly grasped the lessons of the Soviet Union’s collapse. He is a pragmatic authoritarian, rather than a communist. His ambitions look far more traditional, like that of the Tsar and the Russian Empire. His government’s greatest concerns are maintaining control, gaining respect for Russia’s interests and safeguarding its boundaries.

Putinism is no philosophy. It is just traditional authoritarian nationalism. Even those in the West who seem to admire him—reactionary conservatives, intolerant nationalists and wannabe authoritarians—are more enamored of his methods than his person. There is no Putinist version of the Comintern, no global Putinist revolutionary movement devoted to world conquest. Putin cares about the world only insofar as it affects Russia.

Second, Russia’s foreign policy is essentially conservative and restrained, though not pacifist. (In contrast, America’s is unconstrained and frankly militarist.) This approach explains the conflicts in Georgia and Ukraine, as well as attempts to influence American and European elections. The United States views expansion of NATO up to Russia’s borders as the natural evolution of American global domination. Moscow considers the incorporation of Ukraine into the alliance created to constrain Russia as a security threat, rather as Washington might view Mexico’s entry into the Warsaw Pact. While to Americans Moscow is wildly inflating the threat—in truth, the idea of the Europeans attacking Russia sounds like the plot for a fantasy movie—the United States has not suffered multiple invasions from its European neighbors.

Moreover, Putin and many other Russians believe the West violated its commitment not to expand the transatlantic alliance eastward. Perhaps Presidents George H. W. Bush and Bill Clinton merely encouraged the Gorbachev and Yeltsin governments to believe what they wanted. However, newly declassified diplomatic records help explain Moscow’s anger. To that must be added the dismemberment of Serbia, long linked to Russia, and “color revolutions,” always to Moscow’s detriment. Again, one can imagine the reaction of U.S. policymakers most exercised over Vladimir Putin had Russia backed a street putsch against a democratically elected, pro-American president in Mexico City. Such does not justify Moscow’s reaction, but it helps explain it.

Putin wants to disrupt and divide those countries most directly threatening Russia (ironically, his actions have done more to unite the fractious transatlantic alliance). He also wants to prevent NATO from incorporating Georgia and Ukraine (in this he has been more successful). Ironically, there was nothing in his early years in power which suggested animus toward the West. Rather, he appeared to be a typically cynical and worldly KGB officer determined to enhance his nation’s domestic power and international standing. From his perspective Russia’s foreign policy is just business, nothing personal.

Even Putin’s Syrian adventure demonstrates the limits of his ambition. He backed a long-time ally to thwart what would be another aggressive U.S. advance. Far from threatening to dominate the Middle East, Moscow is seeking to preserve a small role in a region long dominated by America, which is allied with Israel, Jordan, Egypt, and the Gulf States. Only pretentious Washington policymakers, who successively intervened militarily to oust established governments in three Middle Eastern countries and backed an ally’s invasion of a fourth country would have the chutzpah to accuse Russia of aggressive designs for supporting a recognized government in one.

Third, the world no longer is bipolar. China and the European Union both enjoy economic wealth and power akin to that of the United States, even though Americans remain wealthier and, at least until the Trump administration, were the primary drivers of international economic policy. Beijing is building a significant military while the Europeans are capable of doing so, in whatever form they desire. India is moving onto center stage as well, with virtually unlimited possibilities in the future.

In a broad sense the Europeans are on America’s side while the People’s Republic of China (PRC) backs Russia, but the divisions are far more complex than during the Cold War. Several European governments have resisted U.S.-led sanctions against Moscow as well as other American initiatives, while the PRC and Russia are friends out of necessity, mostly drawn together by Washington’s hostility. Such an alliance, if it deserves to be called that, likely will prove of little value if truly tested. There is no “Evil Empire,” as President Ronald Reagan once characterized the Soviet Union and its satellite states.

Fourth, there are no essential conflicts between Washington and Moscow. There are no disputed territories, no vital regions occupied by the opposing power. Neither nation has any interest in conquering the other. The only genuine area of conflict is the desire of American policymakers to impose their will virtually everywhere on earth, including areas of long-standing Russian interest. U.S. policy is an inverted form of the Monroe Doctrine: Other nations are not allowed to exercise influence even in their own neighborhood. Washington desires to treat the world as it originally deigned to handle Latin America, viewing any outside interference as “the manifestation of an unfriendly disposition toward the United States.”

This irrationally aggressive approach is evident in Syria, a long-time ally of Moscow. American policymakers speak with outrage at Russia’s military involvement in one nation even though Washington has spent decades intervening—often militarily—virtually everywhere else in the region: Lebanon, Iraq, Iran, Egypt, Israel, Yemen, Jordan, Sudan, Kuwait and the other Gulf States. Similarly misguided are Washington’s complaints about Russian involvement in Central Asia, which any map shows to be a lot closer to Russia than America. The denizens of the District of Columbia might aspire to a world in which America dominates every region, but such an objective is not important let alone vital to the nation’s security. And such an overly ambitious and unsustainable policy certainly is not worth war.

As for Europe, despite the frenzied complaints of the Baltic states and Poland, there is no evidence of any aggressive Russian designs. And why would there be? The meal would be indigestible. Indeed, nearing eighteen years in power Putin has gained nothing but Crimea, which probably was welcomed by a majority of residents. Beyond that influence over South Ossetia, Abkhazia, and the Donbass is a pretty pitiful empire, while the United States has bombed, invaded, occupied and/or dismembered several states. If he was biding his time then he made a huge error, since the Europeans are finally taking steps to create a more effective and better coordinated continental defense.

Even if Moscow were to win against a Baltic state, Russia would only gain ravaged territory along with enduring enmity, brutal sanctions and military retaliation. Worse, if NATO chose to fight—as it almost certainly would—Russia would lose the war. Unsurprisingly, Putin has done nothing to suggests he wants anything other than to secure Russia itself, a goal he has advanced by destabilizing, but not conquering, Georgia and Ukraine, to prevent their inclusion in NATO. The easiest way for Washington to avoid conflict with Moscow is to not advance its security guarantees and military deployments to Russia’s borders in Asia.

Fifth, Russia is no match militarily to the United States. Despite the widespread wailing and gnashing of teeth about the tragically underfunded American military, Washington spends ten times as much on the armed services as does Moscow. Congress sometimes votes larger annual increases in outlays than Russia’s total annual expenditures.