The World Is Reacting to Trump's Words—Not His Actions 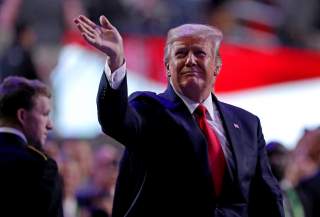 There has been a flurry of articles and op-eds over the past few weeks about how President Donald Trump has supposedly engineered a dramatic departure from the liberal world order that the United States has led for roughly seventy years.

In a Washington Post op-ed that focused mostly on Trump’s autocratic tendencies at home, Joe Scarborough also lamented Trump’s praise “of autocrats across the world as they were ruthlessly consolidating power in countries such as Russia, China and the Philippines.”

The New York Times’ Mark Landler offered up one of the more thoroughgoing assessments, contending that:

Mr. Trump has transformed the world’s view of the United States from a reliable anchor of the liberal, rules-based international order into something more inward-looking and unpredictable. That is a seminal change from the role the country has played for 70 years, under presidents from both parties, and it has lasting implications for how other countries chart their futures.

On closer inspection, these assessments seem overwrought. President Trump has not abandoned U.S. allies in Europe and Asia. On the contrary, he allowed Montenegro’s admission to NATO to go forward, the first new member in ten years. Last month, he backed the sale of weapons to Ukraine’s government as it struggles to put down a Russia-backed insurgency. He increased the number of U.S. troops in Europe. None of these decisions advance U.S. security—arguably, they undermine it—so it is hardly consistent with what most Americans think of when they hear “America First.” What’s more, these actions provide little evidence that Donald Trump is overly solicitous of Vladimir Putin, or particularly mindful of Russia’s geopolitical insecurities.

In Asia, most Americans have focused on the deepening crisis over North Korea’s nuclear program and Donald Trump’s war of words with Kim Jong-un. In practice, however, Trump has not significantly departed from the status quo that he inherited. The U.S. Navy continues to operate extensively throughout the Asia-Pacific. There are still tens of thousands of troops in Korea and Japan, and the Trump administration has shown no signs of reducing that permanent presence, despite the president’s stated misgivings, and the dubious connection between such a presence and U.S. safety.

Meanwhile, across the Greater Middle East, Trump has expanded the air war against ISIS, Al Qaeda, violent extremists, or anyone, really, who might possibly pose a threat. The fact that many hundreds, and perhaps thousands, of innocent civilians have been killed in this campaign reflects a degree of callousness and indifference to human suffering, and is consistent with Trump’s rhetoric during his campaign. Barack Obama, and George W. Bush before him, justified occasional “collateral damage” in the service of the Global War on Terror as an unfortunate side-effect of the necessary use of force.

Lastly, on the question of whether Trump has broken sharply with the foreign policy elite or affirmed that elite’s preferences, let’s not forget, Trump expanded the U.S. ground presence in Afghanistan, despite the fact that he had repeatedly questioned the wisdom of continuing the war. In the end, both Landler and AP reporters Jonathan Lemire and Zeke Miller admit that Trump didn’t depart from the national security establishment’s collective wisdom that the war—already seventeen years old—should continue indefinitely.

In short, Trump’s rhetoric suggests that he is willing to abandon primacy—America’s de facto foreign policy for the past several decades—but his actions largely affirm the status quo, which makes him indistinguishable from his predecessors in a number of critical respects.

If you are skeptical, ask yourself: would Hillary Clinton have withdrawn troops from Afghanistan, wound down the drone war, or blocked NATO expansion or the Ukrainian arms sale?

I doubt it. Meet the new boss, same as the old boss.

To be sure, Donald Trump has pushed through a number of changes to U.S. foreign policy that neither Obama nor Clinton would have (e.g. withdrawal from the Paris climate accord; reversal on better relations with Cuba; threats to undo the Iran nuclear deal; calls for recognizing Jerusalem as Israel’s capital). Indeed, if there is a single theme connecting his disparate actions it seems to be “If Obama did it, it must be wrong.” But, on matters of substance, and particularly with respect to the U.S. global military posture, Donald Trump hasn’t changed that much.

So, why all the fuss? Because Trump is different. Words matter, and Trump’s Twitter rants and ill-considered off-hand comments have not made us, or the world, safer.

Unsurprisingly, U.S. allies in Europe and Asia have questioned, and at times openly defied, Washington’s dictates. “We’re beginning to see countries take matters into their own hands,” observes Richard Haass, president of the Council on Foreign Relations. “They’re hedging against America’s unreliability.”

We might ask, “What took so long?” The U.S. liberal global order was never as liberal as advertised (consider Washington’s support for illiberal dictators and perilous partners during the Cold War and since). It was mostly focused on a few favored allies, and excluded those we didn’t like (so, not exactly global). And it wasn’t even that orderly (the disastrous Iraq War, after all, resulted in hundreds of thousands of deaths, millions of refugees and destabilized an entire region). The rules, meanwhile, applied to others, not to us. It was unrealistic to think that it could last indefinitely, especially when the American people are desperate for something different.

We should be disappointed, therefore, that concerns about Trump and Trumpism haven’t prompted a more serious debate over the future of U.S. foreign policy. Instead we get lamentations that all is lost, followed by a forlorn hope to go back to the way it was before.