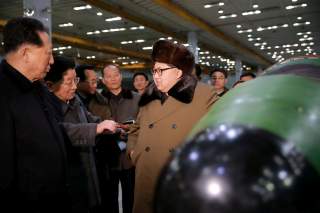 North Korea conducted its highest missile test yet. So much for the Trump administration’s forlorn hope that Pyongyang’s two-month pause of missile tests indicated that the Kim regime was prepared to negotiate terms of surrender with Washington. Western nations responded with the usual meaningless denunciations of the North. President Donald Trump announced: “We will take care of it.”

No one outside of Kim Jong-un’s leadership wants the North to possess a capability to target the United States. Nevertheless, even normally sober Defense Secretary James Mattis repeated Washington’s meaningless litany of scary claims—that the launch threatens America and “everywhere in the world.” This misstates North Korea’s likely intentions for—and the actual impact of—its missile and nuclear programs. Pyongyang cares little about the world and everything about America.

This isn’t the first time an unpleasant, hostile, and threatening government acquired weapons of mass destruction and the means to attack the United States. Joseph Stalin’s Soviet Union and Mao Zedong’s China presented Washington with a similarly difficult conundrum when they developed nuclear weapons. Mao even dismissed America’s retaliatory potential because of his nation’s abundant population. The United States considered and rejected preventive war in both cases.

The Democratic People’s Republic of Korea offers a similar threat, only far weaker. The DPRK is no superpower. Its economy is minuscule, population is small, and security situation is bleak. The North is essentially friendless, down to little more than Cuba. Pyongyang’s former allies, Moscow and Beijing, aren’t likely to risk war to save it. Facing the North is far wealthier and advanced South Korea backed by the American global military colossus. Absent suicidal intent—and so far Kim Jong-un has followed his father and grandfather in desiring his virgins in this world, not the next—North Korea isn’t likely to attack America.

But the DPRK has good reason to fear Washington. After all, the United States took out another member of the “axis of evil,” Iraq, while threatening to attack a third, Iran, which lacked an effective deterrent. American military forces have variously invaded, occupied, and intimidated several nations, including Libya, which negotiated away its missile and nuclear programs. Even paranoids have enemies. Americans understandably prefer that the Kim regime does not possess a nuclear deterrent, but also should recognize that just as the North Koreans aim to deter, they can be deterred.

That is the situation facing the Trump administration today. The latest test shows both the North’s advances and limits. The test went high, but the missile did not carry the weight of an actual payload and appeared to break up after reentry. The Kim regime has come far, but it still has farther to go before it can target America.

Moreover, deterrence works against the DPRK. For the last sixty-four years Pyongyang has not restarted the unfinished Korean War. For the last decade the Kim dynasty has not used weapons of mass destruction, including whatever nuclear capabilities it has developed. There is no reason to believe that the threat of nuclear annihilation, which held a succession of Soviet leaders as well as Mao Zedong and his successors in check, won’t work against the North’s Supreme Leader.

The alternative is to hope for a miracle or start a war. To have any chance of coercing the DPRK, sanctions require Beijing’s full support, and that isn’t likely to be forthcoming unless the United States addresses China’s interests. If the People’s Republic of China insisted that Washington do to Mexico what the United States demands the PRC do to North Korea, President Trump would respond with one of his infamous tweets, and likely an uplifted middle finger or two.

The PRC needs to know what America would do in the event of a North Korean collapse and ensuing reunification. The end game matters to Beijing. Even if China cut off oil exports, as Washington demands, the DPRK still might not yield. A system which outlasted a brutal famine two decades ago might survive, poorer but angrier—while possessing nukes and ICBMs.

That leaves the option of war. Starting the disastrous conflict which America so long prevented on the Korean Peninsula would be a tragic irony. And the consequences would be incalculable. Washington could try to forestall North Korean retaliation for U.S. military strikes and mitigate the damage from any attack, but the risks of full-scale war, with South Korea as the battlefield, are huge. To dismiss the risks because the war would not be “over here,” as Sen. Lindsey Graham infamously put it, would be to play a reckless game of international chicken with millions of lives.

It would be one thing to do so to preempt an imminent North Korean attack. It would be quite different to do so to avoid an uncomfortable—if workable—deterrence strategy. Washington also should start thinking about second-best solutions in a world in which the DPRK is a nuclear state. Living with a nuclear Soviet Union and China was better than starting a war with them. Living with a nuclear DPRK would be better than turning Pyongyang, along with Seoul and Tokyo, into lakes of fire.

Washington needs to talk with the North without preconditions and address China’s interests to win its assistance against the DPRK. It needs to push for an interim freeze of U.S.-South Korea military exercises in return for a suspension of North Korean missile and nuclear tests. Additionally, Washington needs to plan a backup strategy of deterrence and containment. It should also reconsider its conventional security guarantee and nuclear umbrella to the Republic of Korea, which makes America a potential nuclear target.

If President Trump truly hopes to frighten Kim into submission, North Korea’s latest missile test should disabuse him. Despite the president’s repeated fulminations, three carrier groups on patrol, a visit to Pyongyang by a Chinese envoy, and Secretary Tillerson’s expressions of pacific intent, the North is continuing to rush its missile and nuclear development. Unless President Trump changes his approach, he will have to choose between war and acquiescence.