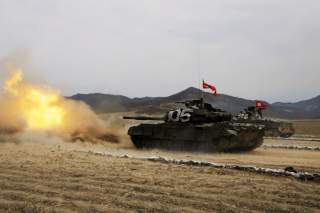 It is the time of year of predictions and forecasts. The course of large tangled relationships like those of the Middle East, or the United States and China, are hard to foresee, but here is a fairly easy prediction regarding otherwise extremely opaque North Korea: there will be no war between the United States and North Korea unless Washington chooses to start one. Western media would have you think we are on the brink of a massive conflict. That is grossly inaccurate. The only war in Northeast Asia would be a war of choice, not necessity, driven by the mistaken insistence of Donald Trump’s administration that the United States absolutely cannot live with a nuclearized North Korea. By contrast, all other players in the region are adjusting to the North’s new capabilities.

To be sure, no one wants North Korea to have nuclear weapons. There is acceptance out here, but it is grudging, anxious, and uncomfortable. Everyone realizes that North Korea is the most dangerous state in history to possess nuclear weapons, as well as the most poorly governed. Everyone is frightened by the potential of regular inter-Korean micro-clashes spinning out of control in a now nuclearized environment. Everyone is anxious about North Korean nuclear safety (or lack of) and the possibility of a Chernobyl-style incident as the North’s unsupervised program enlarges. The North’s weapons also raise the likelihood that it will seek to blackmail the neighborhood into concessions. For example, it might ‘lose’ a weapon if South Korea or China do not give cash ‘aid.’

But ultimately these risks are regionally judged to be less awful than those of a military strike—the so-called ‘bloody nose’ option—or a major conflict. The risks of a major conflict have been detailed in media reporting throughout 2017, so there is no need to repeat them. (For my understanding of those risks, go here.) The ‘bloody nose’ option is similarly risky, and I have seen nothing in allied (i.e., South Korea or Japanese) media to suggest any less anxiety about this option over traditional war. Naturally, China and Russia are deeply opposed to any sort of kinetic action.

In short, all regional players are what international relations theorists call status quo powers. China, Russia, Japan, and the Koreas are not in fact prepared to carry serious costs to re-write the local territorial or prestige-ranking status quo. This is a point David Kang has made relentlessly. For all the talk of the potential for war in the region and its many hot-spots, East Asia has avoided major conflict for almost forty years. The last large regional conflict was the limited Chinese invasion of Vietnam in 1979. And Northeast Asia, despite all the tension and Northern provocations, has not exploded into war as we so often predict.

To be sure, all other things being equal, local players would like to see changes. China may well seek to dominate the region, as so many hawks fear. Japan would certainly like to see its many territorial disputes break in its favor. South Korea and North Korea both formally, in their constitutions, claim sovereignty over the other. So nominally, there are many local grievances and hence the potential for revisionist foreign policies. But these ideal goals are less interesting than whether the local players would actually seriously sacrifice for them. The Koreas may say again and again that they seek unification, but neither is actually seriously acting on that. Formally revisionist, they are status quo states in practice.

Curiously, it is the United States which is perhaps the least status quo-minded of the six relevant national players in northeast Asia. I have routinely noticed in the decade I have lived in South Korea that American national security professionals are more pro-unification and willing to push the issue than South Korean ones. South Koreans seem to have made their peace with North Korea’s existence, at least temporarily, whereas Americans more regularly reject it. Neither Japan nor China has talked of the use of force to inhibit Northern nuclearization. Only the US has.

Perhaps this is so, because the costs of a more openly revisionist course are lower for the United States. America is, of course, a curious half-in, half-out regional player. Around half a million Americans reside in the region, as well as U.S. business and military investments. The United States, however, remains geographically and culturally distant. Or perhaps it is simply the Trump’s much discussed psychology. The president clearly enjoys boasting and bluster, and his traditionalist-nationalist political base, which he grooms so relentless, revels in his machismo.

Whatever the reason, there is no obvious structural cause for a new Korean War in 2018. Deterrence has held for decades. It should continue to hold in this new nuclear environment, as all players, including North Korea, are signaling no serious willingness to risk war to restructure the regional order. If the United States were to do so nevertheless, it would be a war of our choice.