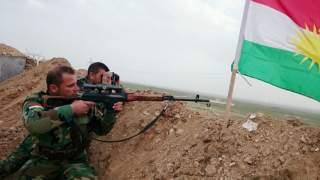 Two years ago, the Islamic State was on the warpath. The jihadist group, treated as a backburner issue at that time by the Obama administration and more of a nuisance than a national security threat to the U.S. homeland, shocked the world with its blitzkrieg across northern and central Iraq.  An Iraqi army that was trained by the U.S. military and funded by the U.S. taxpayer to the tune of hundreds of billions of dollars fled south in terror. In about 48 hours, Iraq’s second biggest city of Mosul was firmly in the hands of the jihadists; in TIkrit, Iraqi soldiers were quickly surrounded in their base, rounded up, and executed in mass graves. The rest stripped off their uniforms and ran for the hills.

The situation couldn’t be more different this year. The U.S.-led military coalition has shown the world that ISIL, as President Obama likes to say, is not ten-feet tall. The Pentagon’s statistics are impressive: tens of thousands of ISIL’s fighters have been killed; dozens of its commanders have been smoked from above; 45% of the group’s territory has been retaken by the Iraqi government; and its oil production is down by half.

The campaign is going so well, coalition officials say, that the city of Mosul is now in its crosshairs. For Iraqi Prime Minister Haider al-Abadi and the Iraqi army leadership, recapturing Mosul would be depicted as the death of ISIL’s self-proclaimed caliphate and a reaffirmation to the Iraqi people that its army is not the disheveled, pathetic force that it was in 2014.  For the Obama administration, Mosul’s capture would be the icing on the cake — a perfect going away gift as it hands the reigns of government over to his successor.

U.S. officials are understandably eager to get moving. Gen. Joe Dunford, Chairman of the Joint Chiefs of Staff, told reporters that, “the noose is gradually tightening around Mosul” and that driving ISIL out of the northern city would be “a very significant blow to the Islamic State as…they can no longer talk about holding a physical caliphate in Syria and Iraq.” Troops and enablers continue to drip in to the Qaraya military base, about forty miles south of the city. Brig. Gen. William F. Mullen III, until recently the deputy commander of the operations room in Baghdad, was so bold as to predict a rout of ISIL in Mosul once Iraqi forces begin moving in. “I don’t think they’re [ISIL] going to stick around,” he said.

It’s always difficult, if not impossible, to predict how a military operation will proceed. The old adage that any military plan becomes useless as soon as the fighting starts is a good rule to follow. But what we can say is that three questions will determine whether or not the combination of coalition airpower and Iraqi and Kurdish boots on the ground will prove to be as successful as it was against ISIL in Sinjar, Tikrit, Fallujah, Ramadi, and Kobani.

1 – How hard will ISIL fight? There is no uniform guidebook that the Islamic State has used to defend terrain. In Ramadi, the group littered the entire city with IED’s, dug trenches to complicate the Iraqi army’s initial offensive, and deployed suicide car bombs to strike at Iraqi lines. It took about eight months for the Iraqi army to drive the group from the area.

Sinjar was a completely different fight. Kurdish and Yazidi forces, taking advantage of precision U.S. airpower, were too much for ISIL to handle. Nearly 48 hours after the first shots were fired, ISIL troops decided to retreat rather than stand their ground and risk overwhelming casualties.

Mosul will most likely resemble Ramadi more than Sinjar. Mosul is the city, after all, where Abu Bakr al-Baghdadi delivered his sermon proclaiming that he was now the caliph of an Islamic utopia. It’s the city that put ISIL on the international map with its sudden thrust into Iraq. And Mosul is the source of a significant amount of the organization’s wealth; its two million residents are a perfect source of cash for ISIL fighters and administrators, whether this takes the form of taxes or extortion. It’s going to be tough to give all of that up, which is likely one of the reasons why Gen. Jamal Mohammad Omer — the Kurdish military chief of staff — predicted that the group will “fight to the death.”

2 – What happens with the Shia militias? If there is any other group reviled in Iraq among the Sunni community as much as ISIL, it’s the Popular Mobilization Forces (PMU) — units that are composed of Shia fighters that don’t necessarily take orders from the Iraqi state. Although these units have been instrumental to the Iraqi government in the fight against ISIL (when the Iraqi army was a shell two years ago, Shia militias made up most of the numbers), they are also unaccountable and are distrusted or reviled by Iraqi Sunnis.

Sunni hatred towards the PMU’s is not without reason; these militias, sometimes in partnership with the Iraqi security forces, have committed some of the worst crimes against humanity in the country. Hanging or murdering prisoners, looting and burning homes in Tikrit, summarily executing Sunni villagers in Diyala, and disappearing hundreds of Sunni men from Fallujah​ are only just the tip of the iceberg. The fact that the PMU’s have been able to engage in such inhumane behavior without being held to account by the Iraqi government is just as concerning to Sunni residents. The record suggests that the PMU’s, if not controlled or limited during the operation, could very well conduct these same crimes in Mosul.

This is what Daniel Davis, a retired U.S. Army Colonel and now senior fellow at Defense Priorities (where I’m also privileged to work), observed during his trip to the frontlines. Civilians in Mosul, Davis writes, “have no intention of allowing any Shia groups into their zone. If they do, I have been told, the Sunnis will fight the Shia militias as much as they would fight ISIS.” Less than a month before the offensive for Mosul is due to begin, we still don’t know whether Prime Minister Abadi will permit the PMU’s to participate.

3 -  Who governs Mosul after ISIL? Kurdish peshmerga, Iraqi national police, Iraqi special forces, Sunni tribal militias, and possibly the PMU’s will all be involved in the operation to liberate Mosul. But assuming ISIL is defeated as everyone hopes, the question of how the city will be governed and who will take control of administrative functions is just as important as whether or not ISIL is pushed back in the first place. Whenever several different and potentially adversarial factions are cluttered together in the same city, it doesn’t take a genius to assume that “victor goes the spoils” mentality could be prevalent. If the Iraqi government doesn’t sit down with the coalition, the Kurds, and the local Sunni forces to hash out these problems and determine who is in charge of what, there is a good chance that internecine fighting between all of them could erupt over turf. That wouldn’t help anybody, in particular the people of Mosul who have been locked in the city by ISIL for over two years.