Time for America to Declare Victory in Syria and Come Home 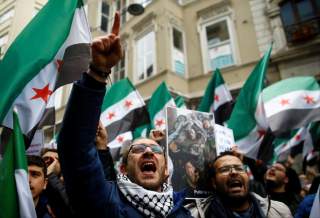 Donald Trump ran for president advocating a different kind of foreign policy. But his appointees are taking a Clintonesque approach to Syria: half-hearted military intervention on behalf of minimal security interests, resulting in great risk with little gain. To avoid escalating involvement in someone else’s war, the president should assert control over his foreign policy.

When asked about Syria recently, the president responded that it was all about the Islamic State: “We are there for one reason, to get ISIS and get rid of ISIS and go home. We are not there for any other reason.”

But his officials believe that America’s involvement is about everything other than the Islamic State. In a recent speech Secretary of State Rex Tillerson implausibly defended America’s involvement in yet another permanent war as, among other things, a refusal to “restore Assad and continue his brutal treatment of his own people” and “provide Iran the opportunity to further strengthen its position in Syria.”

Some seventeen hundred American military personnel are expected to deal with what a Pentagon official described as “converging forces with diverging interests.” The resulting conflict is horrendous, but the parties haven’t finished their fight. Yet another UN call for a ceasefire won’t stop the conflict. Nor will the administration policy, which involves broad commitments, minimal interests, multiple combatants, inadequate resources, unrealistic goals, antagonistic powers, conflicting objectives, minimal oversight and nonexistent public support. What could possibly go right?

The Islamic State lost and the Kurds were used, but otherwise Washington failed to achieve its objectives. Assad survives and is retaking territory, there never were many genuine moderates to promote, Turkey invaded and attacked Washington’s Kurdish friends, combat forces backed by the United States and Russia have clashed, and Riyadh dropped the anti-ISIS campaign to launch its brutal campaign against Yemen, dragging in Washington.

The demise of ISIS the Caliphate provided President Trump with an opportunity to declare victory and bring home America’s military personnel. Which would have been an occasion worth celebrating with a parade.

Today the Syrian issue is mostly a humanitarian challenge for the United States. The world should celebrate when Assad eventually faces eternal judgment for his crimes. But Washington cannot justify American military intervention. Moreover, trying to sort out a complex civil war in which there are multiple forces ranging from dubious to awful is a task beyond the abilities of career-minded bureaucrats, think tank gurus, pundits, election-minded legislators, eternally-hopeful diplomats and political activists.

Of course, even many conservative Republican critics of social engineering at home seem to believe in nation-building abroad, that even Democratic presidents and congressional lawmakers who allegedly did so much to destroy American society can transcend history, religion, ethnicity, geography, culture, ideology and more to inaugurate peace on earth. Alas, that didn’t happen after previous intervention in the Middle East, Balkans, Africa and Asia. And it won’t happen in Syria now. Outsiders can’t fix Syria. The Trump administration should not squander American lives and resources in a heedless pursuit of the demonstrated impossible.

Syria’s conflict matters little for American security. Damascus was allied to the Soviet Union and hostile to Israel throughout the Cold War, but was largely impotent. Despite being tagged as a terrorist state, Syria does not engage in terrorism, especially against America; the designation is political, reflecting Damascus’ hostility toward Israel. But even before its virtual dissolution Syria was a pygmy compared to Israel militarily. The latter can defend its own interests, as it demonstrated when it destroyed a presumed nuclear reactor in 2007. Even with Russian and Iranian support it will take Damascus years to recover, during which it will be a geopolitical nullity.

Moscow’s alliance with Syria matters less today than before. Russia’s involvement largely reflects reassertion of an interest held during the Cold War—an interest in causing the U.S. discomfort, given American sanctions and continued involvement in Ukraine. Washington policymakers appear outraged that there is one country in the Middle East that looks to Moscow when most everyone else—Israel, Jordan and the Gulf States—is strongly aligned with America. U.S. policymakers should eschew geopolitical greed. American involvement is not worth the price.

Especially if the two great powers stumble into a military confrontation. Apparently American airstrikes killed numerous Russian mercenaries fighting with pro-Assad forces that attacked a U.S.-backed militia near Deir ez-Zour and Syrian energy fields. Some reports indicate that a U.S. base was threatened. Washington has no interest in such a fight. The United States should count its blessings and leave at least one of the world’s many conflicts to other nations.

Iran’s military presence changes little. Tehran’s alliance with Damascus is ancient history, running back to 1979. However hostile Iran and Hezbollah might be toward Israel, they can ill afford a direct confrontation, especially after their lengthy and costly involvement in the Syrian civil war. Moreover, both Damascus and Moscow are more interested in reviving Syria than confronting Israel; Iran found itself vulnerable and alone when Israel retaliated for the intrusion of an Iranian drone.

The notion of a new Iranian empire is the result of fevered neoconservative imaginations. For instance, the Heritage Foundation’s Peter Brookes warned that “if successful, Iran would have influence over a big chunk of the Middle East, allowing Shiite, Persian Iran to threaten more Sunni Arab states and nearly encircle American ally, Israel.” Yet Iran is constrained and contained, divided politically and weakened economically. It faces an emerging Israel-Gulf Arab alliance, which already possesses nuclear weapons and outspends it dramatically on conventional weapons. Gaining some measure of influence in tragic Yemen, which has suffered from internal conflict for decades, sectarian Lebanon, which always seems on the edge of another fratricidal explosion, and wretched Syria, which has a shadow of its former power, is a dubious accomplishment. Indeed, this “empire” may be more cost than benefit: Iran’s expensive foreign diversions helped generate the recent wave of domestic unrest.

Nevertheless, AEI’s Kenneth Pollack advocated ensuring that Syrian’s regime’s “foes are armed, trained, and supplied to allow them to persevere and to keep bleeding the Iranians and their allies,” just like the United States did with the Soviets in Afghanistan. But there is no Cold War and Iran is not the U.S.S.R. Pollock argued that this is something “our regional allies from Saudi Arabia to Turkey, the Emirates to Jordan, have all been wanting us to do for years.” Well, of course they want the United States do it. But so what? They are numerous and possess substantial resources. If this is such a great strategy, leave it to America’s supposedly steadfast friends. They don’t need America’s assistance to stop Tehran’s imagined aggressions.

Further illustrating the dangers of unnecessary entanglement, Washington’s nominal ally, Turkey, and genuine ally, the Syrian Kurdish People’s Protection Units (YPG), now are fighting. U.S. officials cannot claim they weren’t warned: Ankara made clear its displeasure with America’s reliance on Kurdish forces, which it views as an extension of the Kurdistan Workers’ Party, which has been fighting for autonomy in Turkey for years. Indeed, the Erdogan government has been far more concerned about the Democratic Union Party’s creation of a nominal Kurdish zone, Rojava, than in the Islamic State’s self-declared caliphate. Washington deluded itself into thinking that the United States and Turkey shared goals in Syria.

Alas, the confrontation risks going from bad to worse. Ankara launched “Operation Olive Branch,” invading Afrin in northern Syria and threatening to move east on Manbij, where U.S. forces are advising the Syrian Democratic Forces, dominated by the YPG. In early February Lt. Gen. Paul Funk visited the area and announced: “You hit us, we will respond aggressively. We will defend ourselves.” In response Turkey’s President Erdogan, who faces parliamentary elections next year, warned that “it’s quite clear that those who say they will respond aggressively if we strike have never had an Ottoman slap.” The prospect of a military clash is unthinkable yet neither side seems inclined to back down.

In mid-February Secretary of State Rex Tillerson spent a couple days in Ankara attempting to resolve the issue, without effect. Apparently, he offered the Erdogan government the slow reduction in U.S. ties to the Kurds, a buffer zone in Afrin, and joint U.S.-Turkish patrols around Manbij, which the Turks considered to be inadequate. Tillerson proclaimed: “We’re going to act together from this point forward. We’re going to lock arms. We’re going to work through the issues that are causing difficulties for us and we’re going to resolve them.”

Further complicating the issue is the shift of U.S.-armed YPG units to Afrin to engage Turkey. The YPG also made an agreement with the Assad regime, which Washington still seeks to oust, to enlist the support of Damascus-backed Popular Forces to oppose Ankara. Even if American and Turkish forces seek to avoid a clash, their proxies could trigger a confrontation. Rather than getting more deeply entangled in what promises to be a needless, bitter, and protracted conflict, Washington should get its forces out of the way.