Time to Strike a Diplomatic Deal with China on North Korea 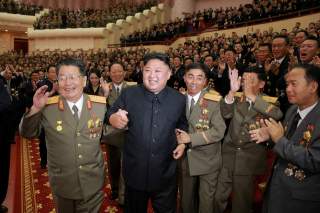 Image: North Korean leader Kim Jong Un reacts during a celebration for nuclear scientists and engineers who contributed to a hydrogen bomb test, in this undated photo released by North Korea's Korean Central News Agency (KCNA) in Pyongyang on September 10, 2017. KCNA via REUTERS