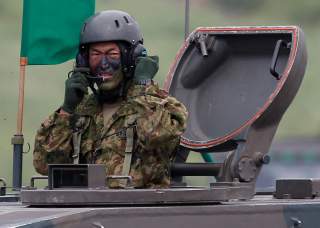 The spectacle of South Korean president Moon Jae-in proclaiming that the United States cannot attack North Korea without his permission is an embarrassment for a country that believes it has taken its place among the nations. He undoubtedly realizes that no American president, especially the present one, would give another nation a veto over U.S. security.

At most the Seoul government could forbid the Pentagon from using bases in the Republic of Korea, but Washington has multiple options for launching military operations. And Sen. Lindsey Graham spoke for many Americans when he declared that a war would be awful for the South Korean people, but at least “it will be over there.” The ROK, not the United States, would provide the battleground if full-scale war erupted as a result of American strikes. So why should the Trump administration worry?

No wonder President Moon is almost frantic over the possibility of a unilateral U.S. attack. The late President Kim Young-sam claimed to have dissuaded President Bill Clinton from assaulting the North’s nuclear facilities. An attack plan was drafted with the assistance of former Defense Secretary Ashton Carter, when he was serving as an assistant secretary under Defense Secretary William Perry, though Clinton aides denied it was put in motion.

The flip side of Seoul’s dilemma is that it lacks the capability to launch its own preemptive strike. Whether that would be wise and under what circumstances is a matter for debate. But long ago the ROK turned its security over to Washington and now is stuck with the consequences.

The same with Tokyo. At least there are historical factors at work in Japan. Still, an aversion to war is a good reason to prepare to deter attack and defeat aggression, rather than do nothing. Or hope that Washington will always be ready to come to one’s defense.

The United States has been complicit in limiting its allies’ armament. Indeed, the “Peace Constitution” imposed on Tokyo formally bans a military. Thus, Japan deploys “self-defense forces,” a quaint interpretative subterfuge that America’s Supreme Court justices would appreciate. Only after much torturous debate did the Japanese government decide to contribute to peace-keeping operations and offer aid to American ships under attack. Still, Tokyo has studiously avoided acquiring weapons that theoretically have “offensive” uses.

The ROK’s constitution does not bar the government from arming itself, but Seoul agreed to treaty limitations on the range of its missiles and granted Washington formal control over its military through the Combined Forces Command. Moreover, threats from the Nixon administration caused South Korean president Park Chung-hee to shut down the country’s nuclear-weapons program a half century ago.

However, an increasing number of people in both Japan and South Korea have grown uncomfortable with the presumption that they should remain militarily vulnerable, if not quite helpless, and rely upon the United States. In recent years North Korea’s weapons development and China’s greater assertiveness have increased Japanese and South Korean support for doing more militarily. Voices have been raised in both nations even favoring development of a countervailing nuclear deterrent. Polls suggest that a majority of South Koreans support doing so.

The Trump presidency has inadvertently spurred interest in greater military self-sufficiency. Donald Trump’s long history of criticizing America’s alliances unnerved leaders and peoples in both the ROK and Japan. His shift to the opposite extreme, threatening “fire and fury” against the North, added additional uncertainty.

My friends in Seoul were used to blustering threats to turn their city into a “lake of fire” emanating from Pyongyang. They were scared to hear similar language from a man in charge of a nuclear arsenal that actually could light up the peninsula. He was not someone in whom they desired to rely upon when it came to their nation’s survival.

Now, both the ROK and Japan appear determined to abandon past military constraints imposed by the United States. With Washington’s support, Tokyo has revised its guidelines to expand allowable Syrian Democratic Forces operations. Japanese prime minister Shinzo Abe backs revising Article Nine of the constitution, which formally bans possession of a military, though the political complications of doing so are many. And newly installed Defense Minister Itsunori Onodera expressed his interest in studying “if our current missile defense is sufficient.”

Before his appointment, Minister Onodera led a parliamentary committee from the ruling Liberal Democratic Party, which recommended developing the capability to launch preemptive attacks, most importantly against North Korea, if necessary. Prime Minister Abe said that Japan was not “planning any specific deliberations about possessing” such weapons, but that Tokyo needed to improve its defenses “given that the security situation surrounding Japan is becoming increasingly severe.”

There also are increasing South Korean calls for Washington to return tactical nuclear weapons to the South and, more fundamentally, for Seoul to develop its own nukes. Although Moon has not climbed on the latter bandwagon, popular support appears to be growing for the idea of a South Korean deterrent. Although the Japanese public is not so ready to consider an option that some of its leaders, including Prime Minister Abe during his first incarnation in the job, have spoken of, an ROK program might change that. Observed Hideshi Takesada of Tokyo’s Takushoku University: “If South Korea went nuclear, that debate would happen in Japan, too.”

This growing popular ferment for an improved defense among America’s allies is all to the good. One of the most pernicious impacts of the U.S.-dominated alliance system, buttressed by Washington’s constant efforts to “reassure” other nations that America can be counted on to defend them to the last American, has been to discourage allies from increasing their own capabilities. The result is a bizarre spectacle of populous and prosperous Asian and European states doing less than the United States to confront threats that mostly concern Asia and Europe.

While limits on allied armament have been justified as discouraging a regional arms race, both China and North Korea already are racing. The alternatives are for America to do most of the heavy lifting on behalf of its allies or turn some—if not most—of the hard work over to friendly democratic states with far more at stake in their own security. The latter makes the most sense and is what President Trump appears to have been advocating for over the years in his usual imperfect and poorly articulated way.

America’s allies are anxious, which is a good thing. No longer are they satisfied relying on Washington. Rather, they are increasingly determined to do more to protect themselves from growing threats. The Trump administration should encourage such efforts. Indeed, Washington’s long-term objective should be to kick both Tokyo and Seoul off the U.S. defense dole. Americans no longer can afford to allow foreign nations to treat the Pentagon like a welfare agency.