Trump Can Only Make the Syrian Disaster Worse 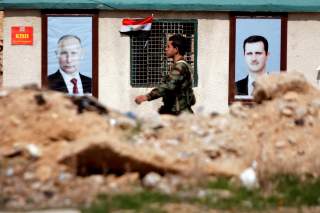 Syria awaits President Donald Trump’s decision whether to retaliate against the Assad government for its apparent use of chemical weapons. Doing so would result in little gain while risking a wider war. Instead, the president should follow his initial instinct to withdraw U.S. forces from the war-ravaged nation.

Just days ago, President Trump displayed a common sense that is often lacking in Washington, recognizing that the United States should come home rather than illegally occupying nearly a third of Syria and confronting the Syrian, Iranian and Russian governments. Then his instincts deserted him when he threatened war against the Damascus government.

His professed humanitarian concern may be genuine, but his administration has spent a year supporting Saudi airstrikes that have killed thousands of Yemeni civilians. Moreover, chemical weapons are not really mass destroyers. Bombs and bullets have the same ultimate result, having killed most of the half million Syrians who have died over the last seven years.

The president’s delay in acting likely reflects Washington’s lack of an effective response. Yet his hesitation allowed the sense of international outrage to diminish while giving Damascus time to prepare for U.S. strikes—hiding some military assets and moving others closer to Russian forces. Moscow, too, has had ample time to decide on its strategy.

Most everyone acknowledges that a one-off attack would have limited if any deterrent effect. But massive retaliation would be even worse. For instance, Firas Maksad of the Arabia Foundation has advocated “a comprehensive bombing campaign, perhaps sustained over a number of days, targeting command and control centers and elite military units to knock out Assad’s entire air force.” Yet strikes significant enough to do serious damage would force Damascus to rely more heavily on Iran and Russia. Reinvigorating the civil war would not likely change the ultimate result, while guaranteeing more casualties, suffering, refugees and chaos.

More important for America, any military attack risks triggering a more general war. If the Trump administration followed Maksad’s advice, Moscow could not easily remain supine. Indeed, even the president’s ill-considered taunts make it difficult for the Putin government to stand aside. Russia can ill afford to play the patsy, bullied by Washington.

The more widespread any U.S. attacks, the more likely “collateral damage” involving Russian and Iranian military personnel. Scores of Russian mercenaries reportedly were killed by American forces when attacking Kurdish fighters in February. Last year the United States downed a Syrian plane attacking U.S.-backed forces. In these cases Moscow was not directly involved and did not retaliate, but this time it might exercise less forbearance.

Russia’s foreign ministry threatened “very grave consequences” in response to “military interference in Syria.” The chief of the general staff warned, “if lives of the Russian officers are threatened, the Armed Forces of the Russian Federation will retaliate against missile and launch systems.” Moscow’s ambassador to Lebanon left out the condition and said simply: “the Russian forces will confront any U.S. aggression on Syria, by intercepting the missiles and striking their launch pads.”

The latter could include U.S. ships, submarines and aircraft, as well as foreign nations. Attacking them would guarantee U.S. retaliation and risk much broader conflict. Militarily Moscow lags behind the United States, but it has much greater interests at stake in Syria. Indeed, far more than Washington, the Putin government needs to demonstrate credibility to prevent further U.S. attempts at coercion. Because of its relative conventional weakness, Moscow may have a lower threshold for using nuclear weapons. The likelihood of general war is small, but the consequences would be catastrophic.

Russia could take actions that are more limited but still dangerous. For instance, Moscow could intensify its support for the Assad government’s efforts to reclaim the remaining areas of Syria under insurgent control. That could include hitting the Kurdish-dominated Syrian Democratic Forces, which Washington imagines will create a de facto state, force Assad from office, expel Iranian influence and limit Moscow’s role. Russia might exercise less care in avoiding risk to Americans stationed in the region, which could result in U.S. casualties and set up a direct confrontation between two capable militaries.

Moreover, Moscow could become more truculent dealing with the United States elsewhere. Additional succor for North Korea would reduce Kim Jong-un’s economic incentive to make a nuclear deal. If Washington repudiates the JCPOA, Moscow could provide additional arms to Tehran to make a future American attack more costly. The Putin government also could become more active in Egypt and elsewhere in the Middle East, attempting to reduce their reliance on Washington.

Tehran, too, might look for opportunities to hit American interests, if not personnel. After Syria’s alleged chemical-weapons attack, an Israeli air strike on a Syrian base killed four Iranians, among others. If the U.S. response adds to that toll, Tehran would face pressure to act. With the common expectation that the Trump administration will abandon the nuclear deal, Iranian authorities might decide that they have little reason to avoid confrontation with Washington. Tehran also might look for opportunities to use proxies, such as Hezbollah in Lebanon, to covertly hit U.S. interests.

Turkey could become a somewhat reluctant partner of Moscow and Iran. The three countries view the Assad regime very differently, but they share a desire to prevent the United States from creating a Kurdish statelet allied with Washington. Turkish president Recep Tayyip Erdoğan already attacked Kurdish forces near Afrin and threatened to march east on Manbij, where American forces are located along with Kurdish fighters. Russia could offer air support; indeed, the Turkish government already plans to purchase the S-400 air defense system.

Iran might try to build the oft-predicted “land bridge” between Tehran and Damascus. Washington imagines its Kurdish allies can prevent that, but they have been diverted by Turkey’s invasion, and Americans are spread thin, not deployed for direct combat. Turkish acquiescence and Russian support would make it more difficult for Washington to stop Iranian activities. A proxy battle could turn into a major-power confrontation.

In recent years the United States has been the most destructive, destabilizing force in the Middle East. In Iraq, Libya and Syria, succeeding U.S. administrations wrecked the established order, fueled sectarian violence and encouraged regional chaos. In Syria, Washington is even risking confrontation with other regional powers and nuclear-armed Russia.

President Trump’s tweets reflect Washington’s overweening hubris, the assumption that the United States could brush aside any Russian response. However, though the American military is stronger than Russia’s armed forces, Washington is acting from a position of weakness in Syria.

The Obama years were marked by a hopelessly inconsistent, overambitious, ridiculously complicated and internally inconsistent strategy. The Islamic State was defeated, but every other U.S. objective fell short. Washington’s Persian Gulf friends decided they had other priorities. America’s Turkish ally proved most interested in destroying America’s Kurdish proxy, which the United States ruthlessly abandoned. The Assad government successively vanquished its enemies. A few thousand troops on station and handful of airstrikes on the Damascus regime won’t retrieve Syria for the Trump administration.

No one can quite imagine Washington and Moscow coming to blows. But the broader and more extensive any American attack on Syria, the greater the chance of sparking a shooting war between America and Russia. It is hard to imagine what objective short of defending America would be worth that cost. Certainly not Syria. President Trump should remember his tweet from September 2013: “Don’t attack Syria—an attack that will bring nothing but trouble for the U.S. Focus on making our country strong and great again.”

Doug Bandow is a senior fellow at the Cato Institute and a former special assistant to President Ronald Reagan. He is author of Foreign Follies: America’s New Global Empire.