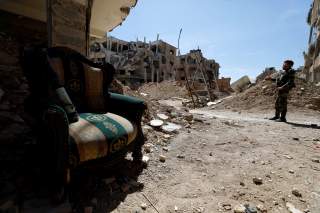 The last few days in Washington have read like the script from 1972’s blockbuster movie The Godfather. Only this time, President Trump is doing his best imitation of Sonny Corleone.

Sonny: I’m going to decide what’s going to be done.

Tom Hagen: All right, but your war is costing us a lot of money, nothing’s coming in. We can’t do business.

Sonny: Well, neither can they! Don’t worry about it.

Tom Hagen: They don’t have our overhead. . . . We can’t afford a stalemate.

Sonny: Well, you just do what I tell you to do! Goddamn it. If I had a wartime consigliere—a Sicilian—I wouldn’t be in this shape!

Like Sonny, President Trump is in the grip of a fanatical urge to act. He’s determined to punish evildoers in Syria for the alleged chlorine gas attack, telling his cabinet that if involved, Assad—and even Putin—will be held accountable: “Everybody is going to pay a price. He will. Everybody will.”

The advocates for military action include the usual suspects. Most are President Trump’s most severe critics, wrongly placing blame for events in Syria on Washington’s chronic failure to intervene in the Syrian Civil War. They reflect the prevailing bipartisan “globalist,” interventionist “wisdom” inside the Beltway: that bombing Syria will induce the warring parties to comply with American demands for polite restraint in a bloody civil war where all sides practice scorched-earth tactics.

No doubt, the interventionists are confident that President Trump’s use of American military power will result in a tolerable political compromise, enabling Syria’s diverse peoples—Arabs, Kurds, Shia, Druze, Christian and Sunni—to live peacefully in a harmonious, secular democratic state. Is that not what happened after the U.S. military intervened in Iraq, Libya and Afghanistan?

President Trump knows better. Bombing Syria is exactly the kind of military action that has made America’s regional opponents stronger and its allies weaker since 2001.

Washington’s 2003 decision to attack Iraq—to occupy the country, disband its army and govern it with American military power—precipitated the breakdown in regional order. The resulting war of U.S. military occupation installed a Shia Arab dictatorship in Baghdad and made Iran the master of Iraq. The outcome produced a cloud of violence that spread across the Middle East and North Africa—a region characterized by underdeveloped economies, stagnant social structures and peoples who define themselves by religious sect and ethnic and tribal identity, not by the artificial dictatorships created in the aftershock of decolonization.

Whether the United States’ small, vulnerable light-infantry force of two thousand troops stays in Syria another six months or another six years, the country’s fate will not be decided by Washington. Moscow, Ankara, Tehran and Damascus will divide it, or Syria will descend into a permanent state of ethnic and religious warfare. Either way, the developing struggle for control of northeastern Syria between Turks and Iranians suggests a low probability that an American bombing offensive will do anything more than force cohesion on the unnatural alliance of Russians, Turks and Iranians.

As a successful businessman, the president knows that without a comprehensive business strategy tied to a realistic understanding of the marketplace, corporations hemorrhage cash, wither and die. Syria is a marketplace where outsiders invest at their own peril.

President Trump’s instinct to leave Syria as soon as possible is sound. The Islamic State’s influence always depended on its ability to seize and hold territory. That territory is now gone.

Yet there is another reason for President Trump to avoid entanglement in Syria. The America First agenda must succeed—and for the agenda to succeed, the Trump presidency must succeed.

Right now, the greatest danger to the Trump presidency is a renewal of Washington’s refusal since 1991 to accept any regional solution in the Middle East other than one imposed by American military power. The danger is a destructive collision with the triumvirate of powers that have tangible, concrete strategic interests in Syria: Russia, Iran and Turkey. Unlike the weak insurgents Americans have faced since 2001, these nations possess powerful air forces, air defenses, armies and navies.

It is never easy for an aggressive commander in chief to resist offensive action, but any significant military action in Syria risks confrontation with these powers on strategic terms that do not favor the United States. Moreover, American military action is simply out of line with Syria’s actual importance to the United States. President Trump would be wise to heed Tom Hagen’s advice to Sonny Corleone—or risk having his legacy shattered on the causeway, like Sonny.