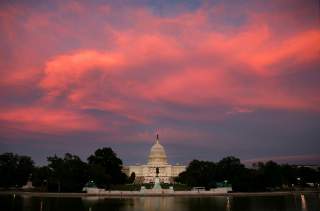 President Donald Trump threatened to “totally destroy” North Korea during his September United Nations speech, and on his current Asia trip, he flatly stated that “the era of strategic patience has ended.” To be clear, the decision on whether to wage preventive war on the Korean Peninsula does not lie with Trump or any president. The United States Constitution reserves exclusive authority for declaring war to the Congress.

If Trump were to make good on his threats and order military action on the peninsula, it is almost certain that North Korea would instantly retaliate, unleashing waves of artillery and rocket fire on Seoul and its environs, potentially killing hundreds of thousands—unless they use nuclear weapons, in which case the casualties might quickly escalate into the millions.

South Korea would never sit idly by if the North launched such an attack, and it is likely they would execute “OPLAN 5027”—a decades-old plan to launch a counterattack across the DMZ. Given treaty obligations, the United States would be sucked into such a war immediately.

It would be too late, given such an eventuality, for Congress to debate anything. Whether it would make sense or not, the United States would be committed, and no member of Congress would dream of voting to cut off funds while troops were engaged in major combat.

Congress would then be exposed as an impotent, nonfactor of its own making: nothing more than a rubber-stamp for the commander-in-chief.

Avoiding a war in Korea is in America’s vital national security interests, especially because conflict very likely could lead to nuclear war, jeopardizing millions of lives and trillions of dollars of commerce. The range of outcomes for any preventive military action to disarm North Korea would likely fall somewhere between “really bad” on one side and “catastrophic” on the other. There is no prospect for a “good outcome.”

This decision is far too consequential to the entire nation to be left to one person. In 1793, James Madison—known as “the Father of the Constitution”—explained why the founders expressly withheld the power of declaring war from the president.

He warned that it would not “be difficult to fabricate a power in the executive to plunge the nation into war,” that the prerogative for judging the necessity of war was “fully and exclusively vested in the legislature,” and emphasized that “the executive has no right, in any case to decide the question.”

The authors denied the president such a right, he continued, because he “might sometimes be under temptations to sacrifice his duty to his interest, which it would require superlative virtue to withstand. An avaricious man might be tempted to betray the interests of the state to the acquisition of wealth.”

As a reminder, China has clearly and unambiguously stated that if North Korea were to start an armed conflict, Beijing would remain neutral. But if the United States and South Korea “carry out strikes and try to overthrow the North Korean regime,” the statement continued, “China will prevent them from doing so.” Regime change would be implicit in any military strike to separate the regime from its nuclear weapons.

Clearly the American people do not want war in Asia, do not believe that military strikes are necessary to contain the threat, and want the situation to be solved by nonlethal means. Congress is “hired” by the people, and thus they have an explicit obligation—even aside from the direct requirement of the Constitution—to have a serious debate before any action is taken.

If after a thorough and comprehensive debate Congress decides to authorize military action, then at least the people will have had had a chance to communicate their views through their representatives, and the president can act with the full backing of the country.

Everything could still go very badly, but the American people would enter into war with clear eyes. There are ways to ensure the security of our country besides using the military—deterrence and diplomacy foremost among them—and the people appear to be smarter than Washington in understanding this fact.

In any case, regardless of the outcome, the Constitution demands that congressional deliberation and authorization come before military strikes. In addition, the people deserve to be consulted before the Washington establishment chooses to take America into a war that could deprive it of thousands of its sons and daughters and trillions of its tax dollars.

Daniel L. Davis is a senior fellow for Defense Priorities and a former lieutenant colonel in the U.S. Army who retired in 2015 after twenty-one years, including four combat deployments and an assignment in Korea. Follow him @DanielLDavis1.

Image: The setting sun casts an orange glow on passing clouds over the U.S. Capitol Building in Washington September 19, 2006. All 435 seats in the U.S. House of Representatives are up for election in the November mid-term elections, with Democrats needing a net gain of six seats to regain control of the Senate, and 15 seats to recapture the House of Representatives. REUTERS/Jason Reed