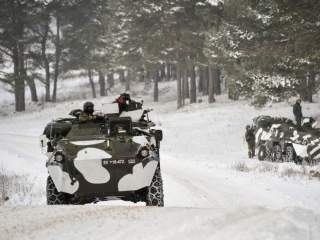 Presidential candidate Donald Trump again caused more than a little consternation in the ranks of the foreign-policy elite when he delivered his speech at the Mayflower Hotel. Not only did he contend that U.S. policy was covered with intellectual rust that had accumulated since the end of the Cold War (an indictment of the self-anointed Mandarins that have been directing our policy), but he cited specific deficiencies. Those deficiencies included the nation-building fiascos in the Middle East, the mishandling of relations with Russia and China, and the problems of egregious allied free-riding associated with America’s network of security alliances.

Trump’s comments about Washington’s flagship alliance, NATO, have caused the most uneasiness in the foreign-policy establishment. But, alas, such worries are probably overblown. Although he has accurately termed NATO “obsolete,” and explicitly expressed a willingness to have the United States withdraw from the alliance, terminating U.S. membership is clearly not his preference. In his Mayflower Hotel speech, he made the following statement: “Our allies are not paying their fair share” of the collective-defense effort. “The countries we are defending must pay for the cost of this defense, and if not, the U.S. must be prepared to let these countries defend themselves.” [Emphasis added] He went on to stress that “the whole world will be safer if the allies do their part to support our common defense and security.

With those comments, Trump placed himself in the venerable NATO “burden-sharing” camp. He put the threat of U.S. withdrawal on the table, but only as a regrettable, last-resort option, if the allies proved uncooperative. That stance is most unfortunate. Frustrated American officials, policy experts and pundits have been chasing the unicorn of greater NATO burden-sharing for more than six decades without success.

Indeed, the ink was barely dry on the North Atlantic Treaty establishing NATO in 1949 before U.S. officials saw worrisome signs that Washington’s new alliance partners were shirking their share of the collective-defense responsibilities. Secretary of State Dean Acheson assured uneasy members of the Senate that the Europeans would provide the vast majority of armaments and manpower for NATO, making it unnecessary for the United States to station a large number of troops on the Continent. That scenario proved to be untrue.

In the mid-1950s, John Foster Dulles, President Dwight Eisenhower’s secretary of state, issued a warning to his alliance colleagues that the administration would have to conduct an “agonizing reappraisal” of America’s defense commitment to Europe if the NATO allies could not develop a united policy regarding West Germany and make a more serious effort at collective defense. That American attempt at coercive diplomacy ultimately failed. European leaders never took the warning seriously, believing that their American counterparts regarded Europe as far too important to America’s own security and prosperity to ever consider abandoning the continent to possible Soviet domination. They called the Eisenhower administration’s bluff and quickly confirmed that it was a bluff. There was no reappraisal of Washington’s defense commitment to Europe, agonizing or otherwise.

There have been numerous calls from American officials and legislators in the decades since for European members of NATO to “do more” for the collective-defense effort. The Nixon administration was able to beat back the Mansfield Amendment (named after Senate Majority Leader Mike Mansfield), which proposed to drastically reduce U.S. troop levels in Europe, in part because of informal promises from the NATO allies that they would step up their defense efforts. Those promises that were soon forgotten.

More recently, President Obama’s secretary of defense Chuck Hagel admonished the Europeans during a February 2014 meeting of NATO defense ministers that America’s patience was wearing thin. The current path of inadequate defense spending, he warned, “is not sustainable. Our alliance can endure only as long as we are willing to fight for it, and invest in it.” Rebalancing NATO’s “burden-sharing and capabilities,” Hagel stressed, “is mandatory—not elective.” The tone of his message was quite firm. “America’s contributions in NATO remain starkly disproportionate, so adjustments in the U.S. defense budget cannot become an excuse for further cuts in European defense spending.”

Hagel’s speech and other calls for greater burden-sharing have had only limited impact. Four alliance members now meet the target agreed to at the 2006 (!) summit to devote at least two percent of annual GDP to defense, up from two members at the time of his speech. But that is still an anemic effort, and it notably does not include such key powers as Germany and Italy. Moreover the slight increase in the military effort of NATO’s European members has been drowned out by the calls for the United States to do much more—to station heavy armor and the most modern military aircraft on Russia’s western flank. On balance, allied free riding is as bad as ever.

That’s why Trump’s calls for greater burden-sharing are a fatal distraction. Americans have been chasing that unicorn for decades, and it is past time to recognize the chase for the futile quest it is.

NATO is thoroughly obsolete in any case. As I have written on other occasions, it was created for a very different world and it no longer serves America’s interests. Instead of considering U.S. withdrawal as a regrettable, “fall back” option if his burden-sharing proposals fail, Donald Trump should embrace withdrawal as the preferred option for an intelligent twenty-first-century foreign policy.

Ted Galen Carpenter, a senior fellow at the Cato Institute and a contributing editor at The National Interest, is the author of ten books and more than 600 articles on international affairs. He has written several books on NATO, including Beyond NATO: Staying Out of Europe’s Wars (1994) and NATO Enters the Twenty-First Century (2001).