Trump Ends the CIA Syria Pipeline: An Admission of Failure 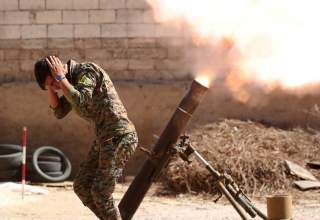 Last month, after meeting with CIA Director Mike Pompeo and National Security Adviser H. R. McMaster in the Oval Office, President Donald Trump decided to phase out the covert, CIA-run program that funneled small weapons and ammunition to moderate Syrian opposition elements trying to overthrow the Assad regime. An administration official speaking to the Washington Post on condition of anonymity called the cut off “a momentous decision,” before bluntly concluding that “Putin won in Syria.”

The order will presumably be opposed by congressional hawks like Sen. John McCain, Sen. Lindsey Graham and House Speaker Rep. Paul Ryan, all of whom have been vocal proponents of Bashar al-Assad’s forceful overthrow ever since Assad unleashed his army and intelligence service to quash an anti-government uprising in March 2011. Indeed, at one point in time, the official U.S. policy in Syria was to not only call for Assad’s resignation in multiple multilateral forums, but to actually provide the military assistance that Assad’s opponents would need to achieve that objective. The strategy was straightforward: push back government forces, carve out territory in Syria outside of the regime’s control, and thereby create an alternative for a significant segment of the Syrian people who were clamoring for a new political reality. Former CIA Director David Petraeus, former Defense Secretary Leon Panetta, former Secretary of State Hillary Clinton, and former Chairman of the Joint Chiefs of Staff Gen. Martin Dempsey lobbied for this program as far back as the summer of 2012, which is when Syrian troops were literally deserting the security forces in droves.

Syria has changed in drastic ways since those discussions occurred. The battlefield geometry has long outpaced the military and logistical support that the CIA and its partners in Amman and Riyadh were willing to provide. Russia’s forceful intervention into Syria on behalf of its Syrian government client in September 2015—continuing this very day—was the beginning of the end for Washington’s regime change campaign. The Obama administration over the next two years and the Trump administration over the past six months continued to refer to Bashar al-Assad as a despicable and evil human being leading a reprehensible and criminal regime. That verbal pushback aside, the White House has implicitly recognized that there was simply no way that the United States could stop the Syrian government’s territorial gains unless the opposition was given more weapons of increasing caliber. The risk of those weapons falling into the hands of the Islamic State, Jabhat al-Nusra, or any of the other extremist factions on the ground today—or being used to shoot down Russian aircraft—was simply too dangerous for the United States to accept.

Viewed through this prism, the abolition of the anti-Assad CIA program likely would have occurred sooner or later. The unemotional fact of the manner is that Russia is willing to expend far more men, money and military assets to keep the government in Damascus alive than the United States was ever willing to kill it. The bottom line is that Vladimir Putin was willing to spend a lot more on behalf of Assad than Barack Obama, Donald Trump and most European leaders were willing to spend on forcing the strongman into exile. At its core, who wins and who loses in Syria’s civil war is more important for Moscow’s national interests than it is for Washington; the United States doesn’t need a pro-American Syria to maintain a strategic foothold in the Middle East. But that’s exactly what the Russians require.

Over the past two years, the Assad problem has been handed over to the United Nations to solve. Special Envoy Staffan de Mistura, a forty-plus-years negotiator who is used to mediating in some of the world’s most desperate areas, has been doing his best to coax all of the warring sides to the table. A broad agenda has been set that Assad’s representatives and opposition delegations can work with. But even seven rounds of talks in Geneva led by a tenacious diplomat have yet to bridge a divide that may in fact be unbridgeable. From the moment Russian warplanes started mercilessly bombing opposition-held cities and enabling the regime’s counterattack, Bashar al-Assad has been able to sit pretty in his Damascus palace, not feeling the need to negotiate seriously. Assad, after all, holds the upper hand with an iron grip. And unless man-portable air-defense systems begin to stream their way into the opposition’s arms inventory—something that nobody besides the Saudis and the Emiratis think is a smart play—we shouldn’t expect the Assad regime to act any differently when the eighth round of talks in Geneva happen this September.

Trump’s shuttering of the CIA pipeline will come as a significant, moral disappointment. It will be very, very difficult for Syrians who have experienced such unprecedented brutality from their government—barrel bombs, mass torture, mass executions, the use of chemical weapons, the withholding of food to starve whole communities into surrender—to understand why the administration has made this decision. Those in Washington who are vehemently anti-Trump are already labeling the weapons shutdown as yet another capitulation to Vladimir Putin from a man who is so desperate to be buddies with the Russians that he’s happy to throw America’s leverage down the toilet.

But if we’re being honest with ourselves, the administration’s determination to stop transferring weapons to moderate rebel forces is just a realization of where we are in the Syrian conflict today—staring at a regime confident that it will pull out of this mess in a stronger position thanks to Russian and Iranian blood and sweat.