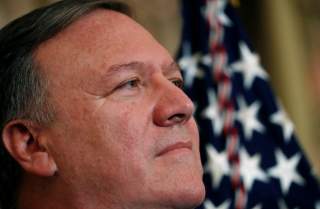 The United States prioritizes a Western Hemisphere “distinguished by democracy, peace, respect for human rights, and cooperation,” Secretary of State Mike Pompeo told the Organization of American States, the principle organizing body of North and South America, at a meeting in Washington earlier this week.

It was his first address to the body as secretary, and he didn’t mince words: he called for Venezuela’s ouster.

At a time when North Korea and Iran dominate the news and capture the White House’s attention, Pompeo stated, strikingly: “There is no greater challenge today than the full-scale dismantling of democracy and the heartbreaking humanitarian disaster in Venezuela.”

Vice President Mike Pence, who on other issues such as North Korea is an internal skeptic of Pompeo’s less interventionist approach, concurred in his own remarks to the OAS: “The once-great Venezuelan economy and government is now nothing more than a failed state.”

The United States has not explicitly made regime change in Caracas its official policy, but room for dialogue would seem scant: “The United States stands steadfast in support of the Venezuelan people and their efforts to return to democracy,” Pompeo said. He added: “The regime’s refusal to take meaningful action on these issues has demonstrated unmistakable bad faith and exhausted options for dialogue under current conditions.”

At the end of his tenure, Secretary of State Rex Tillerson asserted American privileges under the Monroe Doctrine, in a remark that drew raised eyebrows across the region.

The State Department did not return a request for comment if Foggy Bottom is prioritizing the near-two hundred year-old doctrine in the region going forward under Pompeo.

Venezuela could be seen as a theater in the broader confrontations with China, Russia and Iran; all three countries are substantially invested in the country.

Tillerson had made the point about the Chinese, thrilling American China hawks and roiling Beijing, as I documented.

Pompeo “has now added his voice to those of the vice president, UN Ambassador Haley, and other senior administration officials and Congress insisting that the Maduro Administration be held to account for having destroyed democracy, wrecked the economy, and engineered the hemisphere’s worst humanitarian crisis,” Eric Farnsworth, a former State Department official and Washington director of the Council of the Americas, told me.

“The situation continues to deteriorate, and has now become a regional issue spilling over Venezuela’s borders, not just an ‘internal’ matter which Latin America and the Caribbean might more easily ignore,” Farnsworth said. Farnsworth has previously told me the Venezuelan refugee situation in Colombia is without precedent -- that any refugee crisis in South America is basically unheard of. Though an ex-Clinton official, Farnsworth has praised parts of the administration’s approach to Cuba. “It has become abundantly clear that that the problems stem from the misguided, corruption-riddled, Cuba-directed governance of the Maduro Administration and not the price of oil … In fact, U.S. actions have been remarkably restrained,” he told me.

Indeed, restrainers are, at least for the moment, onboard with Pompeo’s line.

"Secretary Pompeo’s call to oust Venezuela from OAS makes sense and should be heeded by the other member states,” Benjamin Friedman of Defense Priorities told me. “Maduro has proven himself a worthy successor to his mentor Hugo Chavez, who set Venezuela on its recent decent into misery.

But he cautioned against more fundamental involvement, fearing blowback.

“It is difficult for the United States and other countries to help Venezuela without deepening its misery. Banning its oil sales, for example, would starve its regime of revenue but also would probably literally starve its people, who are already suffering enough. U.S. covert aid to Madura opponents could help but threatens to discredit them,” said Friedman.

Meanwhile Pompeo, like Farnsworth, namechecked Cuba as a prime regional villain; the Trump administration has partially pulled back from the Obama-initiated detente with Havana.