Trump Is Pursuing a Defense Spending Hike and a Pentagon Audit at the Same Time? 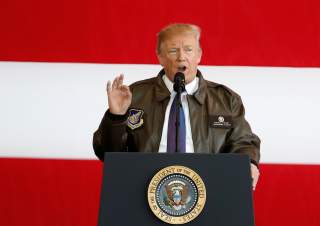 Left unmentioned in the president’s speech on Monday regarding the National Security Strategy is that, under his direction, the Pentagon is undergoing its first audit in history. It’s not referenced in the document itself, either, though “restraining Federal spending” and “making government more efficient” are mentioned. The National Interest pointed out last week how little attention the audit is getting.

When the Republicans first made gains back in the Barack Obama era, they did so on the Tea Party wave. Now-forgotten is that many of those emerging political stars, like Rand Paul and Mike Lee, dissented from party orthodoxy on military spending. That legacy carries on, to some extent, today; Paul and Lee were among only eight senators to vote against the National Defense Authorization Act earlier this year. Perhaps this skepticism helped broaden the conversation on the Right, allowing the rise of a Republican nominee in 2016 who openly mocked George W. Bush. Yet, seemingly paradoxically, Donald Trump stands with most establishment Republicans in favoring some sort of defense spending hike, and his administration is pursuing that path—is that a contradiction? Some observers insist a one-two punch is necessary: a defense spending hike can only possibly be justified in tandem with a long-overdue audit.

“You’ve got a lot of wasted administration and travel costs coming from keeping smaller bases that aren’t needed anymore open. . . . Also I could see them going after General Services contracts—lots of people fill redundant roles that used to be operated by civilian government personnel,” the advisor says. “Ironically, it would be cheaper to bring these back to permanent government positions than to pay the salary, processing and overhead for a contractor.”

“Oh, and I bet a bunch of people get their hands slapped for poor fiscal controls,” the source says.

U.S. Defense Spending in the Era of Reemergent Geopolitics

Vladimir V. Putin’s Russia on Tuesday called the new National Security Strategy “imperialist” and a return to the “Cold War.” This on the heels of a few days of warm words between the White House and Moscow, after Trump and Putin spoke twice by phone between Thursday and Sunday. On the latter call, Putin had rung to hail an intelligence-sharing exchange Russia says averted a terrorist attack. “President Putin extended his thanks and congratulations to Central Intelligence Agency (CIA) Director Mike Pompeo and the CIA,” the readout noted. It ended enthusiastically: “President Trump then called Director Pompeo to congratulate him, his very talented people, and the entire intelligence community on a job well done!”

Exclamation points in White House statements are unusual. Russia now always a thorn in the administration’s side domestically, the exchange drew a sharp rebuke from former National Intelligence Director James Clapper, a trenchant Trump critic: “I think this past weekend is illustrative of what a great case officer Vladimir Putin is,” referencing the Russian president’s KGB past. “He knows how to handle an asset, and that’s what he’s doing with the president.”

H. R. McMaster, the national security advisor, swiftly dismissed that characterization. “It’s just not true,” the lieutenant general told CBS. He also noted earlier this month the administration’s general framework, seemingly confirming some of Putin’s concerns: “Geopolitics are back, and back with a vengeance, after this holiday from history we took in the so-called post-Cold War period.”

Surely the administration sees defense spending (how much, and where?) and defense efficiency as an integral competent of putting the United States on the correct footing. Or if not, then not referencing the audit in the National Security Strategy is an indication to the contrary: it should. Jacob Heilbrunn writes, “Perhaps what the document reveals most clearly is the mental scaffolding of the Trump administration, which is to seek American dominance. Whether the Trump approach, encapsulated in its maiden national-security statement, restores that dominance or accelerates its erosion is the standard by which the administration will be judged in coming years.”