Trump and Smart Foreign Policy: Both Missing From the GOP Debate 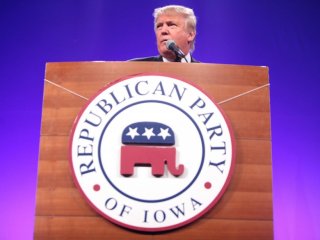 Former Defense Secretary Bob Gates accurately described the state of foreign affairs discourse during prior Republican debates, when he noted “either they really believe what they’re saying, or they’re cynical and opportunistic, and, in a way, you hope it’s the latter, because God forbid they actually believe some of the things that they’re saying.” Thursday night’s debate, the last before the Iowa Caucasus, was no exception. All the candidates talked tough—sometimes taking it to quite ridiculous extremes—but most were either unwilling or unable to offer any specific foreign policy proposals, or to deviate from clearly planned talking points.

Certainly, with Donald Trump absent, the average foreign policy knowledge among the candidates was several notches higher than usual. But to borrow a phrase from foreign policy guru Ben Carson, if Russia is a one-horse economy, some of those on last night’s debate stage in Iowa were one-horse candidates. Chris Christie answered every question by promising to prosecute terrorists and Hillary Clinton. Marco Rubio answered questions about the liberty movement and immigration with responses on ISIS. The questions were generally high quality, but many of the candidates effectively refused to answer them, choosing instead to pivot to the issues they were most comfortable with.

A number of common misconceptions reappeared. As Gates noted, we simply don’t know if the candidates actually believe these factoids, or if they are simply using half-truths for political expediency. We were again told by several candidates that America’s military is in decline. Ted Cruz described declining numbers of planes (8,000 to 4,000) and ships (529 to 272). But not only were these numbers inexplicably wrong, but comparing today’s military to that required during the Cold War is disingenuous at best. Nor do such numbers take any notice of factors like improvements in technology. Marco Rubio noted that he will rebuild “the U.S. military because the world is a safer and better place when America is the strongest military in the world.” No mention was made of the fact that U.S. military spending already eclipses its closest seven rivals.

Ted Cruz could certainly use some further education on the uses and effectiveness of air power, after he again repeated his call for the use of carpet bombing against ISIS. First, his statements are inaccurate. The Gulf War did not involve the use of carpet bombing, but in fact some of the earliest successes in precision bombing. Second, the statements also lead one to believe that it is only the Obama administration’s caprice which prevents the U.S. from engaging in carpet bombing today. In fact, most experts agree that carpet bombing is not a useful strategy; there is no need to engage in such a practice inside Iraq or Syria where the risk of civilian casualties is high. Indiscriminate bombing of the type Cruz calls for is also generally considered a war crime. We might almost prefer to assume that Cruz doesn’t believe what he’s saying.

And even where the moderators provided an opening for nuance on various foreign policy issues, the candidates were typically unable to answer with any statement more complicated than their talking points. A nuanced question involving America’s NATO treaty obligations to the Baltic States was posed to Ben Carson, who proved unable to answer in any coherent fashion. In response to a question designed to get candidates to address the dichotomy between their stated intentions to ‘rip up’ the Iranian nuclear deal, and the fact that the deal will be largely concluded by the time any of them takes office, Marco Rubio retreated to his familiar—if  confusing—refrain about Iran’s apocalyptic theology.

Some candidates did perform better in this debate. John Kasich was able to provide nuance on the issue of sanctions, explaining why unilateral sanctions are often less effective than multilateral ones. His calls for coalition building and against a permanent U.S. role as a global policeman were realistic, and a welcome retreat from his absurd assertion in another recent debate that he “would punch Russia in the nose.” Rand Paul also seems to have tired of trying to disguise himself as a hawk, making strong and coherent statements in support of a more restrained foreign policy.

But overall, whether the result of poor knowledge, poor advising or political expediency, the candidates remain generally weak on foreign policy, especially when it strays from the hot button topic of ISIS. Even on that topic, when pressed by moderators, many candidates fell back on policies not dissimilar to those currently being pursued by the Obama administration, such as building a global coalition to combat ISIS. That’s not necessarily a bad thing—there are almost no good alternatives to the administration’s current policies—but it does illustrate the stark divide between the tough rhetoric the candidates repeatedly toss around and their actual proposed solutions, which are often superficial and unrealistic.

Unfortunately, the question posed by Gates—whether the candidates are ill-informed or simply cynical—remains a relevant one. These debates are adding little to our understanding of how the candidates might actually pursue foreign policymaking as president. Nor are debate moderators free of blame on this issue, as many questions repeat from debate to debate while other key foreign policy issues—how the U.S. should deal with China, for example—go largely unaddressed. Ultimately, it might be another quote from Gates that sums up the debate best: “The level of dialogue on national security issues would embarrass a middle schooler.”

Emma M. Ashford is a visiting research fellow at the Cato Institute.