Trump Wants You to Write Him a Blank Check for War in Afghanistan. Don't. 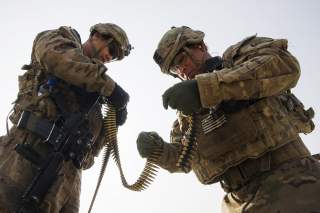 On Monday night from Fort Myer, Virginia, President Trump told the nation that despite what he’d said from the campaign trail in 2016, he was not going to end the war in Afghanistan. Instead, he would expand it and remove any visible exit signs from the equation. Whether this decision will cost him politically in 2020 is yet to be seen, but the cost to the nation in the present could be significant. The plan outlined by the president is virtually certain to continue the unbroken record of failure.

The president’s plan calls for a modest troop increase, relaxing the rules of engagement for combat troops, and putting more pressure on Pakistan to cease its cross-border support of various insurgent groups. Additionally, he said his plan would be better because he was changing U.S. war policy from one that has been time-based to one that is conditions-based. There are many things that should trouble Americans about this decision.

First, what the president didn’t say is more important than what he did say. For example, Trump said he would increase troops, but he refused to say how many troops. He said he would relax the rules of engagement, but didn’t tell the nation what the new rules would be. He said he would put pressure on Pakistan, but he didn’t say how that pressure would be applied. And most critically, he said the new mission would be conditions-based, but he didn’t explain what any of the conditions were for the mission.

Trump essentially asked Americans to give him a blank check to pay for an extended war. That check should not be given, however, because it is certain to bounce. It is important to understand that for any national-level strategy to succeed, it has to work on the muddy, sometimes chaotic ground; if the plan’s elements can’t be accomplished, then it’s impossible for the higher-level objectives to be accomplished. The plan outlined Monday night fails at every point by this standard.

To better convey why adding a few thousand more troops will not accomplish even one of the president’s goals, I will share what I experienced on a combat patrol in east-central Afghanistan in 2010, during my second combat deployment in the region. This patrol was typical of thousands of other patrols that took place both before and since that day.

As the then-chief of the Army’s Rapid Equipping Force in Afghanistan, I traveled extensively throughout the country in 2010–11 to assess the needs of combat troops at the tip of the spear. At the time, there were approximately 140,000 NATO and American troops deployed there.

In late December 2010, I accompanied a joint patrol of U.S. and Polish troops through several villages in the strategically vital province of Ghazni, not far from the Pakistan border in east-central Afghanistan.

At one point, our mounted patrol of heavily armored combat vehicles passed within sight of Ghazni City, the provincial capital. The Polish officer in charge of the patrol lamented that despite the presence of the NATO base in that province, the city of Ghazni was a literal no-go area for the coalition, and the Taliban had free reign there. Later we came to a medium-sized village where many of the troopers dismounted and walked alongside the vehicles through town, carrying rifles and machine guns.

The route through the village resembled a military parade because the residents came out and watched from the roadside and rooftops of nearby mud-bricked buildings. At no time did any leader on the patrol stop and talk to anyone. At the city limits the troops remounted and the patrol continued on to the next village. I asked the patrol leader how often they patrolled through that town. “About once every six weeks,” he told me.
Along the “parade route” there were scores of men watching us. Since no one so much as talked to them, we had no idea whether they were innocent farmers trying to provide for their families or active members of the Taliban who were planning to later attack the very coalition forces walking through town.

Neither the Polish soldiers I observed in Ghazni or the members of America’s elite 101st Airborne Division whom I patrolled with in the equally vital province of Kunar had control of the territory in which they were stationed. The Taliban could freely operate even in a provincial capital.

The Taliban and various terror groups are stronger now than that faced by Obama’s 2010 surge. What possible rationale can the president make to the American people that sending thirteen thousand U.S. troops against an enemy significantly stronger than the one we faced in 2010 will succeed where 140,000 NATO troops did not?

Moreover, by refusing to tell the American people what goals he’s requiring those few troops to accomplish, he makes it impossible for any independent observer to know whether the strategy is working or failing. It is laudable that President Trump keeps matters pertaining to the conduct of battle plans secret, but that does not extend to telling the people in whose name the Army fights what the force is being asked to accomplish.

The American people have a right to hear and then decide for themselves whether they are willing to support the continuation of a war that has utterly failed for more than a decade. If they conclude that the aims chosen by the president will not rationally succeed, then it is their right to withhold support. But in our democracy, the commander-in-chief does not have the right to go to war on his own, pursuing objectives he keeps secret from the public.

It is unequivocally a vital national interest of the United States to defend the U.S. homeland and protect its citizens. But occupying the territory of Afghanistan will not accomplish that objective. Candidate Trump’s instincts were right. It is time to effectively end the mission in Afghanistan with a plan that actually safeguards American interests.

Daniel L. Davis is a senior fellow for Defense Priorities and a former lieutenant colonel in the U.S. Army, who retired in 2015 after twenty-one years, including four combat deployments. Follow him @DanielLDavis1.

Image: U.S. soldiers from the 3rd Cavalry Regiment examine belts of bullets for corroded rounds during a training mission near forward operating base Gamberi, in the Laghman province of Afghanistan December 15, 2014. REUTERS/Lucas Jackson