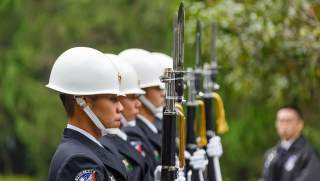 Tensions between Taipei and Beijing have been rising since the electoral landslide by the pro-independence Democratic Progressive Party in Taiwan’s January 2016 presidential and legislative elections. DPP president Tsai Ing-wen has endeavored to chart a delicate middle course. She seeks to enlarge her country’s diplomatic links with other nations and assert key Taiwanese strategic and economic interests in such places as the South China Sea. At the same time, Tsai has thus far sought to avoid truly provocative moves that would infuriate Beijing and lead to a crisis.

As part of her diplomatic outreach efforts, Tsai called President-elect Donald Trump in early December to congratulate him on his victory and discuss issues of mutual interest. Trump’s willingness to take that call was a coup on her part. Since the United States switched its official recognition from Taipei to Beijing in 1979, no president or president-elect had engaged in direct contact with a leader of Taiwan. Trump’s action suggested that the incoming administration might be interested in closer and more formal ties to Taipei.

The president-elect increased that speculation shortly thereafter with comments he made during an interview on Fox News. He stated bluntly that the United States did not consider itself bound by the One China policy that had guided his predecessors. That comment, if meant seriously, would signal a major shift in U.S. policy. Although Washington had never embraced Beijing’s assertion that there was only one China and Taiwan was part of China, previous presidents had affirmed that the United States would not challenge that position. Trump’s actions and statements suggested that Washington might now abandon that stance—a change that would have profound implications.

The possible U.S. rejection of the One China policy encouraged staunchly pro-independence elements in Taiwan as well as their supporters in the United States. It seemed more than coincidental that Tsai’s government took steps to boost both its presence and its territorial claims in the South China Sea. Taipei also intensified its efforts to achieve official status in international organizations. An image of greater assertiveness and self-confidence was evident.

Once in office, though, President Trump began to deflate expectation for a dramatically closer bilateral relationship. In a letter to Chinese president Xi Jinping, he assured Xi that Washington would continue to respect the One China policy.

Trump’s sudden, dramatic reversal was rather mystifying. When he took Tsai’s phone call and made his subsequent dismissive comment about the One China policy, it is possible that he did not fully comprehend the ramifications of those actions. It is also possible that he shrewdly engaged in such conduct as a warning to Beijing that there could be adverse consequences regarding Taiwan if Chinese officials were not prepared to make concessions on trade, the South China Sea, North Korea, and other issues. In other words, the apparent brief flirtation with changes in U.S. policy toward Taiwan could have been nothing more than a cynical bargaining ploy.

Whatever the motive, Trump’s head fake made Taiwan’s already delicate position even more difficult. Shortly after the renewed commitment to the One China policy, Beijing began to increase its pressure on Taipei. During the eight years that previous Taiwanese president, Ma Ying-jeou, had pursued an extremely accommodating policy toward the mainland, the Chinese government had eased its campaign to poach the handful of (mostly small and poor) countries that maintained diplomatic ties with Taipei in exchange for generous financial inducements. Now, Beijing apparently intends to revive that campaign with unprecedented intensity, with the intent of completely isolating Taiwan diplomatically. Indeed, Foreign Minister Wang Yi stated bluntly on March 8 that Taiwan has “no diplomatic future.”

Tsai’s government appears to be retreating from any attempt to forge a closer relationship, especially a closer security relationship, with the United States. The latest confirmation was a statement from Taiwan’s defense minister reiterating the decision made in 2016 that Taipei would not be a participant in Washington’s deployment of the Terminal High Altitude Area Defense system. THAAD is already earmarked to shield Japan and South Korea from ballistic missile attacks. Even though that system is officially aimed at neutralizing North Korea’s missile threat, Beijing has vehemently opposed THAAD, because the radars could be reconfigured to scan deeply into China and possibly degrade that country’s nuclear deterrent.

Taiwan likely concluded that participation in THAAD risked provoking Beijing beyond endurance. Those concerns were warranted. China had issued ominous warnings that it might use military force if Taipei joined that system. Whether Tsai’s government would have made the same cautious decision if it had been confident of strong, reliable U.S. support is uncertain. But with the Trump administration’s return to the One China policy, the risks of seeking inclusion in a system that China adamantly opposed were clearly deemed too great.

An important feature of an intelligent, effective foreign policy is consistency and reliability. Donald Trump did Taiwan no favors with his blatant inconsistency. If he was not serious about altering Washington’s policy toward Taiwan, he should have refrained from raising false hopes in that country and needlessly roiling the U.S. relationship with China. Such actions are the hallmark of an amateurish foreign policy.

Image: Change of the Guard of Honor at the mausoleum of Chiang Kai-shek. Wikimedia Commons/Creative Commons/CEphoto, Uwe Aranas